The 2nd known Saline Valley Salt Company Stock Certificate was found in April 2013. Unfortunately, it is in very poor condition. It was owned by a man in Calhoun, Georgia. He acquired it recently (within the last year) in payment of a debt of the previous certificate owner. Ironically, the previous owner contacted me about buying it, but then his cell phone number became disconnected before we could agree upon a price. 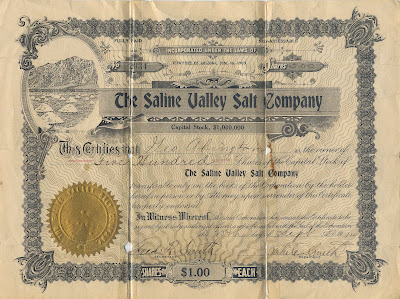 Above (Click to enlarge): I scanned the front of the 1914 stock certificate before donating it to the Eastern California Museum in June of 2013.

The artwork for the 1914 stock certificate is dramatically different from the 1920 certificate. The main differences include:

1) Gold Corporate Seal (see below) which incorporates the same basic art as the embossed seal from the 1920 stock certificate.

2) Has original Saline Valley salt harvesting art in the oval in the upper left hand corner.

3) The paper and the print/ink quality on the 1914 stock certificate is of much lower quality than the 1920 certificate. This does not really make sense, as I would expect the initial stock certificates to be of better material quality, to go along with the original Salt Lake art. Not only is the 1914 paper of low quality, but the ink used to print it is faded and has ink drop outs in it.

4) The 1914 certificate was signed by White Smith, at the time the President of the Saline Valley Salt Company and also by Fred R. Smith, the Secretary and Treasurer of the Saline Valley Salt Company and White Smith's brother. This is the first known signature of White Smith and Fred R. Smith - a huge find! We believe that these are the actual Smith brothers signatures, because the 2 Smith signatures use different handwriting. There is also a 3rd type of handwriting used by the person that was dating the stock, the number of shares, and the name of the person the stock was issued to. 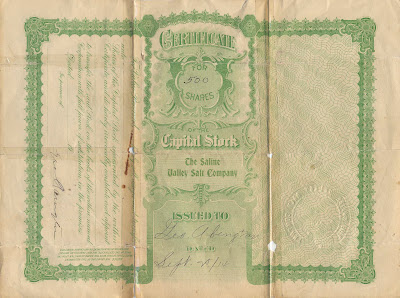 Above (click to enlarge): The back of the 1914 Stock Certificate.

The back indicates that 500 shares were issued to Geo. Abington on September 25, 1914 (same name as on the front, and in the same handwriting as the front). We know that most or all of the major investors were from Tennessee, as was White Smith and his siblings.

There is a George Abington who lived in Shelby, Tennessee in census years 1910 and 1920, and was born somewhere between 1869 and 1884, making him 41 years old in 1910 and 51 years old in 1920; he appears to have had a wife named Mary. George Abington is a fairly UNcommon name, so I am about 80% confident that it is the person named on the stock certificate. It would also appear that Geo. Abington signed the stock certificate on the back (vertical signature on the left side of the certificate above), bringing a total of 4 different handwriting samples on this 1914 stock certificate (both front and back).

Let's take a look at the corporate logo that is embossed in gold on this certificate (below).
This artwork appears to be almost identical to the embossed stamp from the 1920 stock certificate. The main difference is that Inyo Mountains in the background are faded in the gold 1914 stock certificate seal. 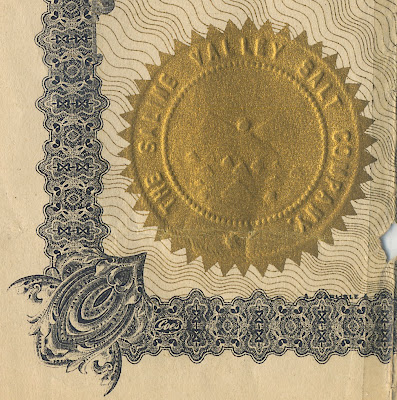 This art was used to create the Saline Valley Salt Company T-shrts (which are for sale for $16 plus shipping - just email us at SalineValleySaltTram@gmail.com!). That artwork is reproduced below, and is the 4 color art on the BACK of the t-shirts (Art by Laura Waag at Sidedoor Studio in Southern California): 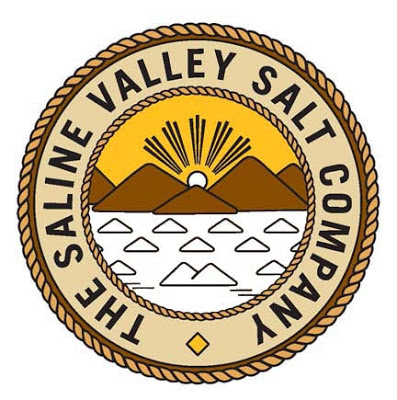 Condition of the Stock Certificate: Unfortunately, the condition of this stock certificate, as mentioned above is POOR. It is torn on the standard vertical tri-fold (and repaired with glossy clear tape), as well as having 3 additional horizontal folds that have torn (and been repaired with taped as well). It is also somewhat worn and faded, and has a few tiny spots where the paper is missing along the folds. However, given that it is the only one known to exist, we are not complaining.

Thanks as always for the support from Roberta Harlan and Jon Klusmire at the Eastern California Museum! Also, thanks to those who have offered to chip in some cash to purchase the certificate. This time, the price was very reasonable, so I just made the purchase myself. Keep that cash ready however, should a more expensive Saline Valley Salt Company artifact become available.

[Tim's Note: Fred Patterson was the son of Henry Clifton Patterson, who was a Salt Tram builder and left a diary that documented his work on the tramway for all time. We met Fred in on 11/15/2009 at his home in Bishop, Calif., and he kindly let us spend 3 hours in his home scanning the diary of his deceased father, Henry. Thanks also to Nancy Patterson for her hospitality and graciousness in supporting our efforts at finding out more about the Salt Tram. Below is a photo of Fred at his home on the day that we scanned the diary. May he R.I.P.] - click photo to enlarge. 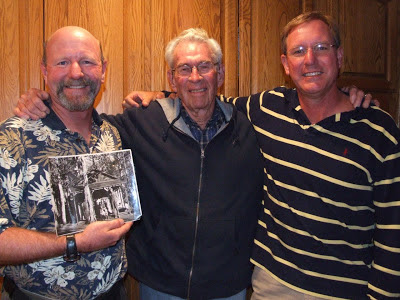 Mr. Patterson was a veteran of World War II and served in the Rhineland, Central Europe, where his troops liberated much of Germany, including Dachau Concentration Camp. For 25 years, Mr. Patterson was the principal of Line Street and Elm Street Schools (1959–1984). Fred served as a deacon and elder of the First Presbyterian Church in Bishop where he also taught the high school Sunday school class for many years.

Fred was preceded in death by his loving wife of 52 years, Pat. Fred loved his best friend and savior, Jesus Christ and was serving Him at the very moment the Lord decided He needed Fred more than we did. Fred was a family man and it was evident in the dedication, sacrifices and love he gave his family.

A memorial service will be held at 1 p.m. Saturday, Jan. 12 at the First Presbyterian Church. Pastor Peter Thomsen will officiate. Interment will follow at the East Line Street Cemetery in Bishop with a celebration of life to follow at the Patterson home.

The family would appreciate that any donations in Fred’s memory be given to the First Presbyterian Church Deacon’s Benevolence Fund (for the less fortunate).