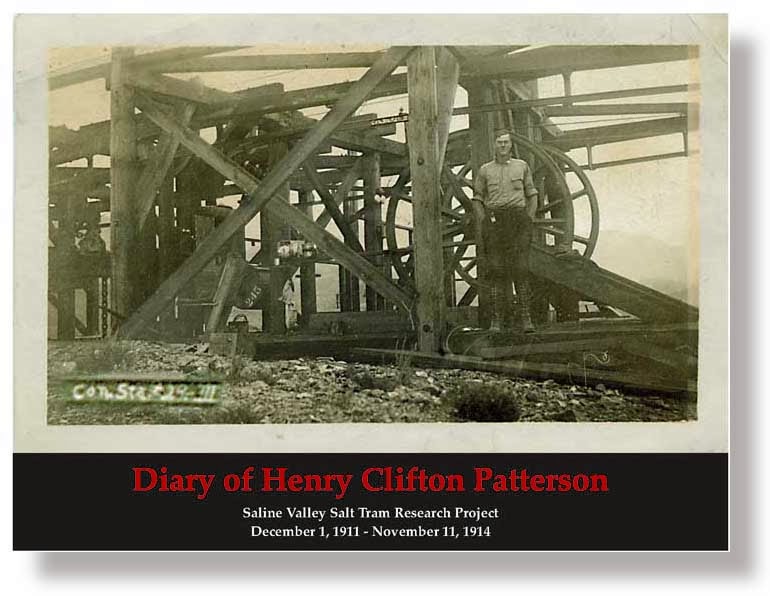 Boy, you would think that I would be reading this thing more careful. Let's sum it up: On 7/15/1912, Cliff wrote that he "Got Sick" in the simple manner that was his way. He returned to writing in his diary, and apparently returned from his home in Bishop where he had been recovering from illness, as he "came from Bishop to Camp at Station 26" - end of mystery.

Now in its 5th Printing (coming with an update in October 2018), "The Diary of Henry Clifton Patterson", written by the "Friends of the Salt Tram" and the Waag Bros. (Tim and Brian Waag), is available for purchase. The Bros. sell the book at their cost as a tribute to Salt Tram Builder Henry "Cliff" Clifford Patterson. Please email us at SalineValleySaltTram@gmail.com to order your book. Typically, the cost is $35 plus $5 shipping. Click on images below to enlarge. 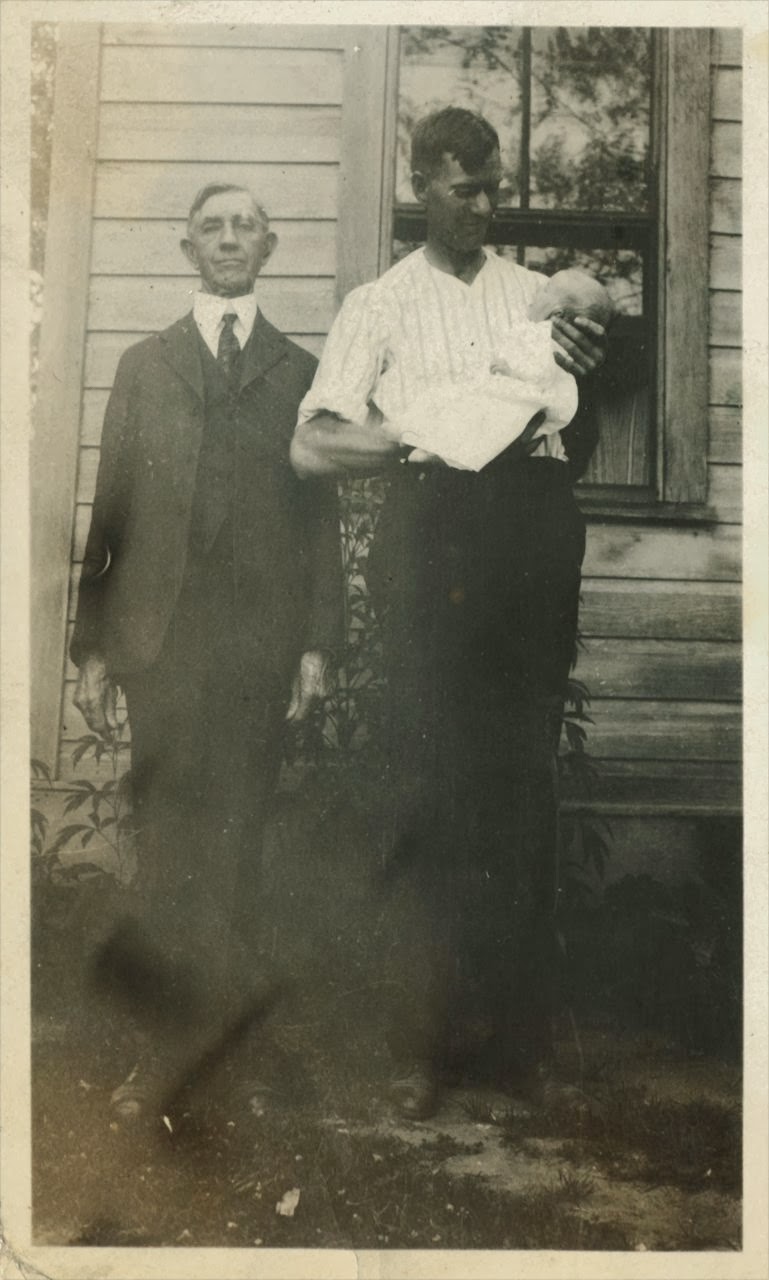 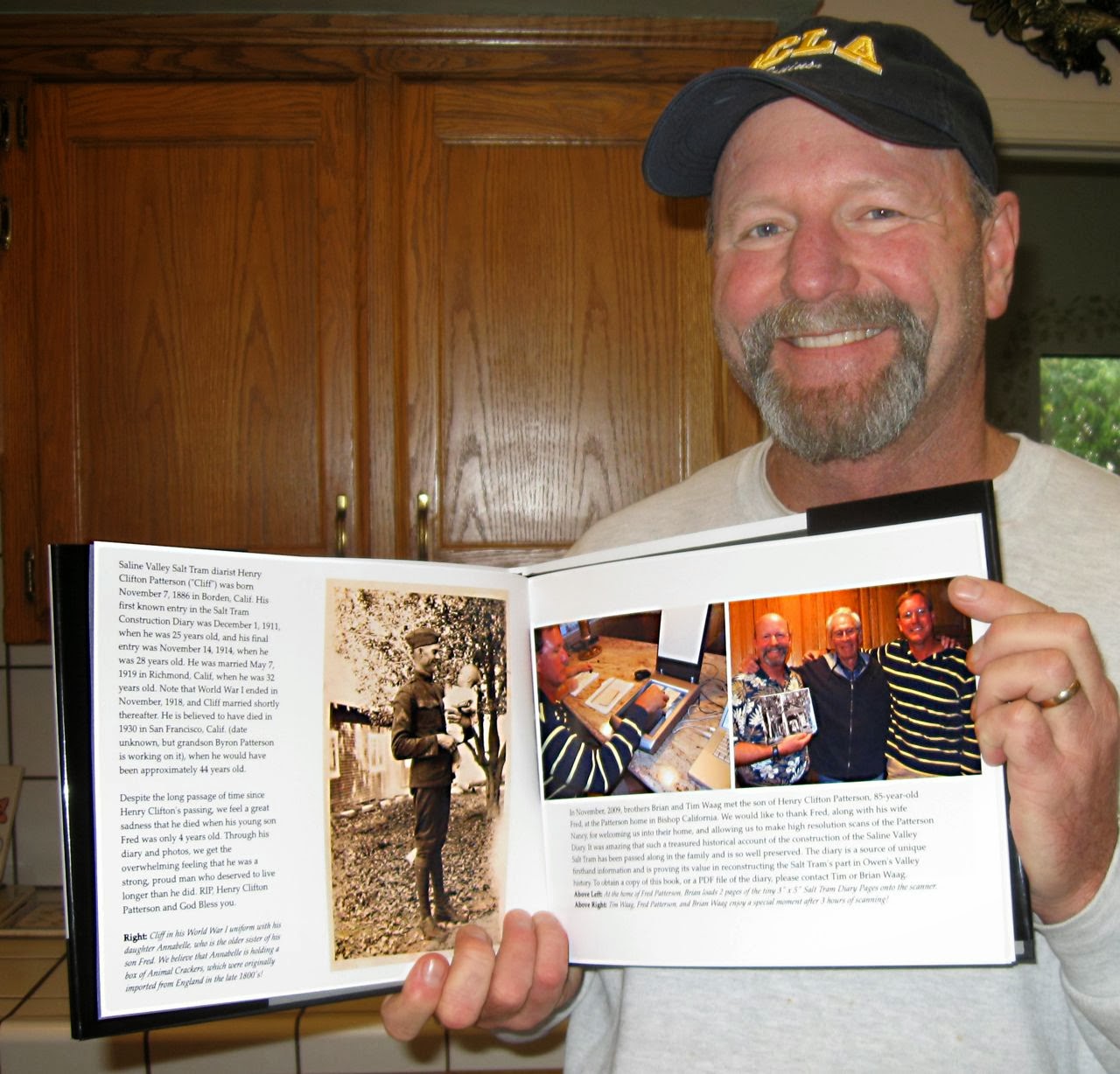 Above: Tim (the older of the Waag Bros.) displaying the Salt Tram Diary book (text and photos of the Patterson Family). 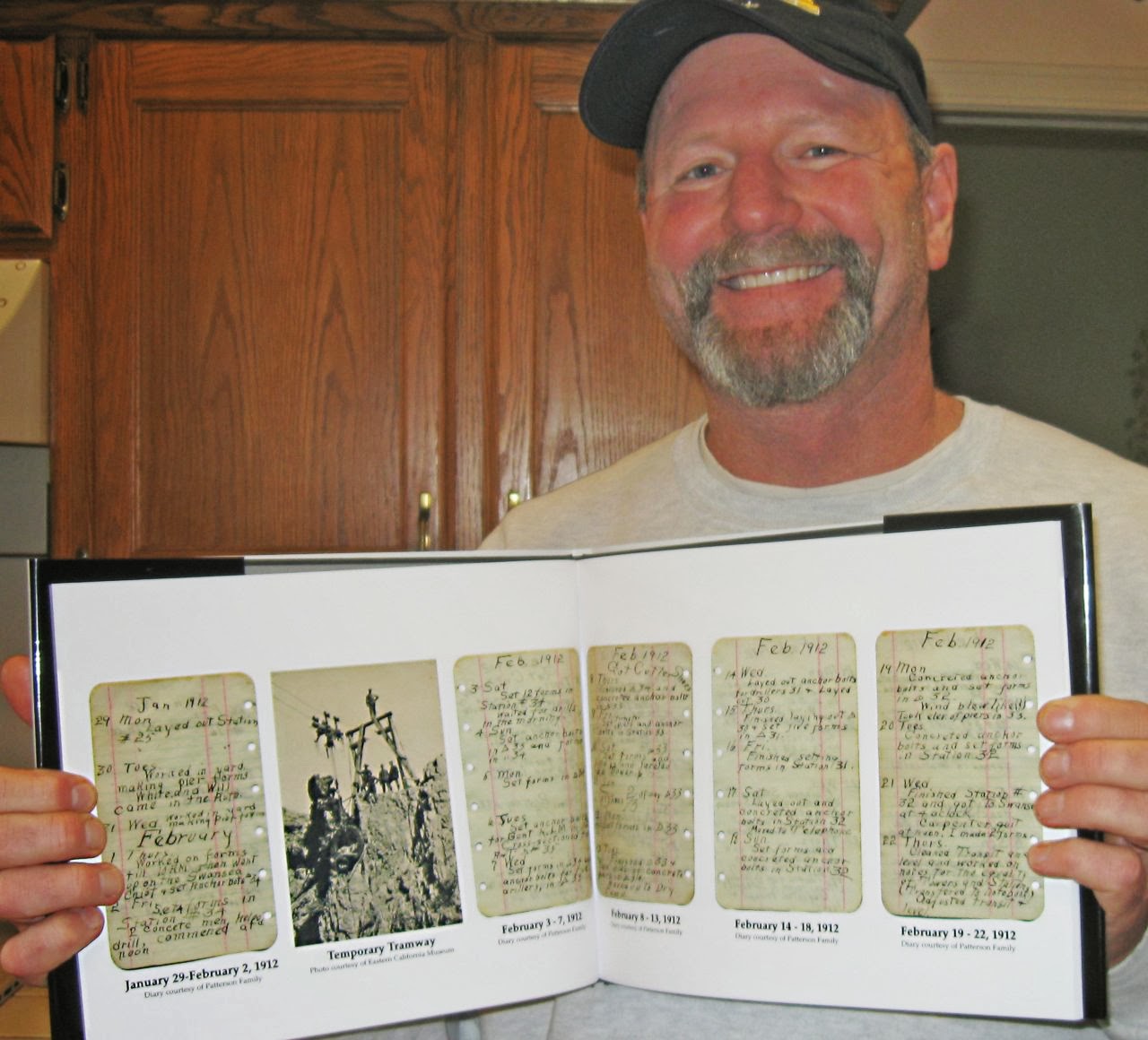 Above: Tim displays the inside pages detailing the diary pages and historical photos - this photo at left is one of three "temporary tramways" that were built in order to build the Salt Tram! Wow!

This Coffee Table Quality book has the following features: 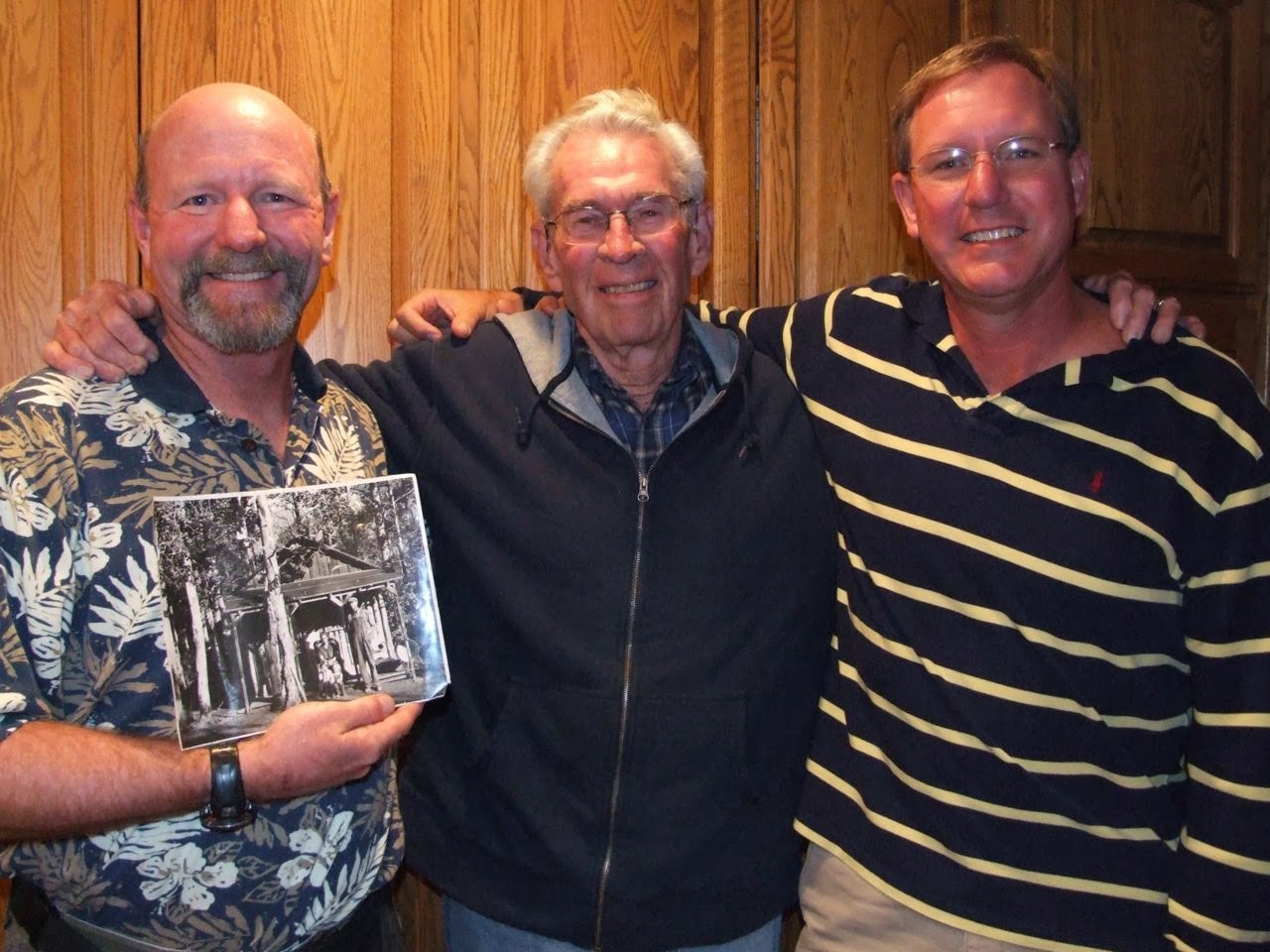 The book itself contains the story of how Tim and Brian came across this amazing diary written by Cliff Patterson in a chance meeting with Cliff's son, Fred Patterson, who still lived in Bishop, Calif. until his passing in 2013. The book includes background information on Cliff Patterson and his service during World War I up through his passing. Cliff's diary also details a 3-week vacation he took by wagon into Yosemite in 1912, including how much he paid for hay and grain for his horses in Yosemite Valley. The diary discusses the difficulties of building the Salt Tram, and how Cliff's struggles while working alongside his brother Earl as they surmount daily obstacles including: avalanches, tents getting blown away, freezing weather, having to go duck hunt at Owens Lake for food and much more!

Below: a few random sample pages from this amazing window into history. Click to enlarge and see this amazing detail. 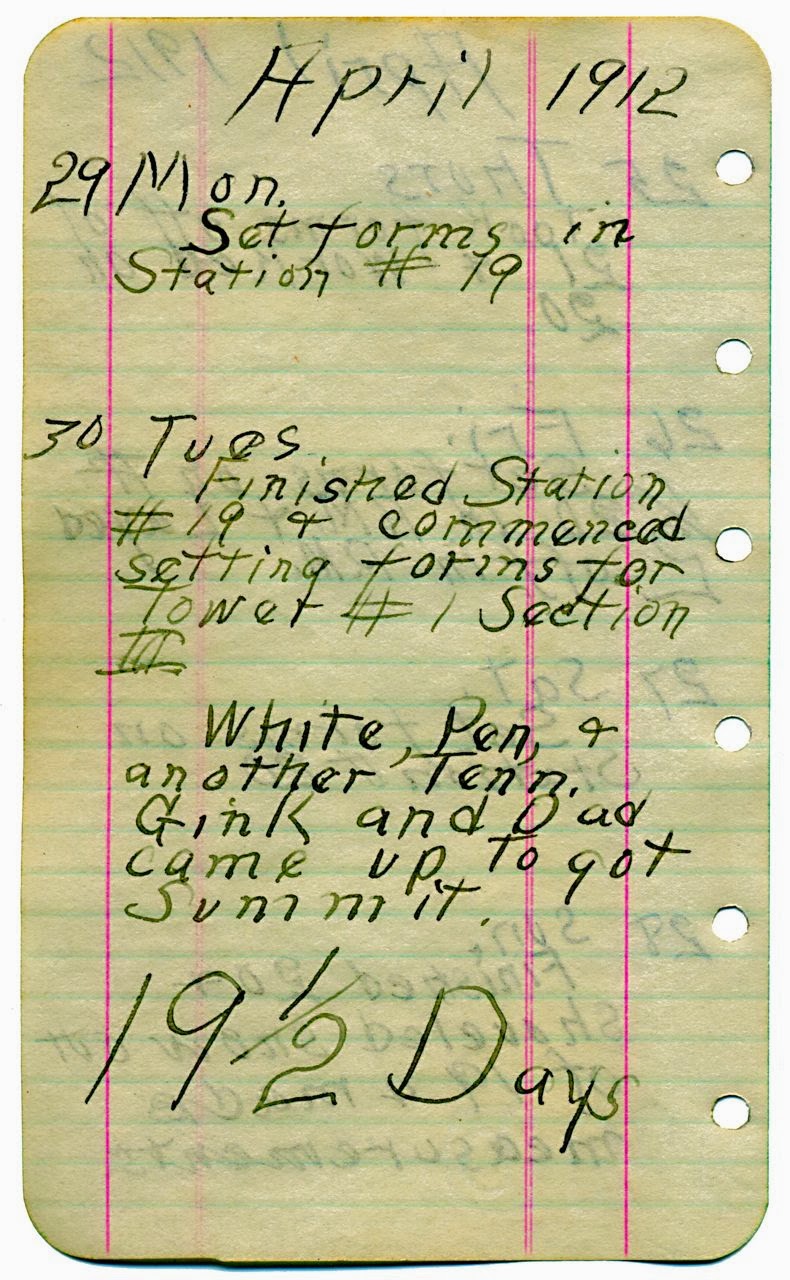 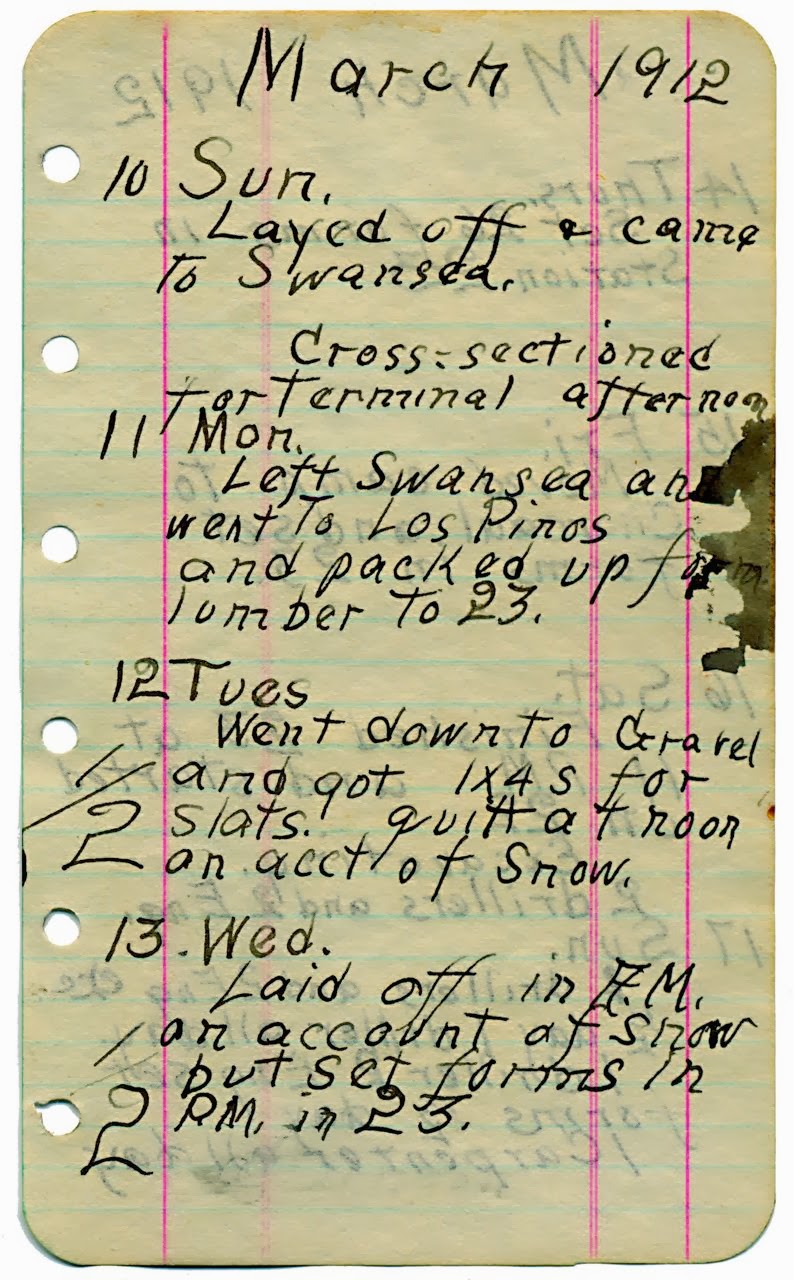 Order yours now by emailing to SalineValleySaltTram@gmail.com - we will mail you the book, along with a return payment envelope - just send us the payment after you have received this rare diary book. 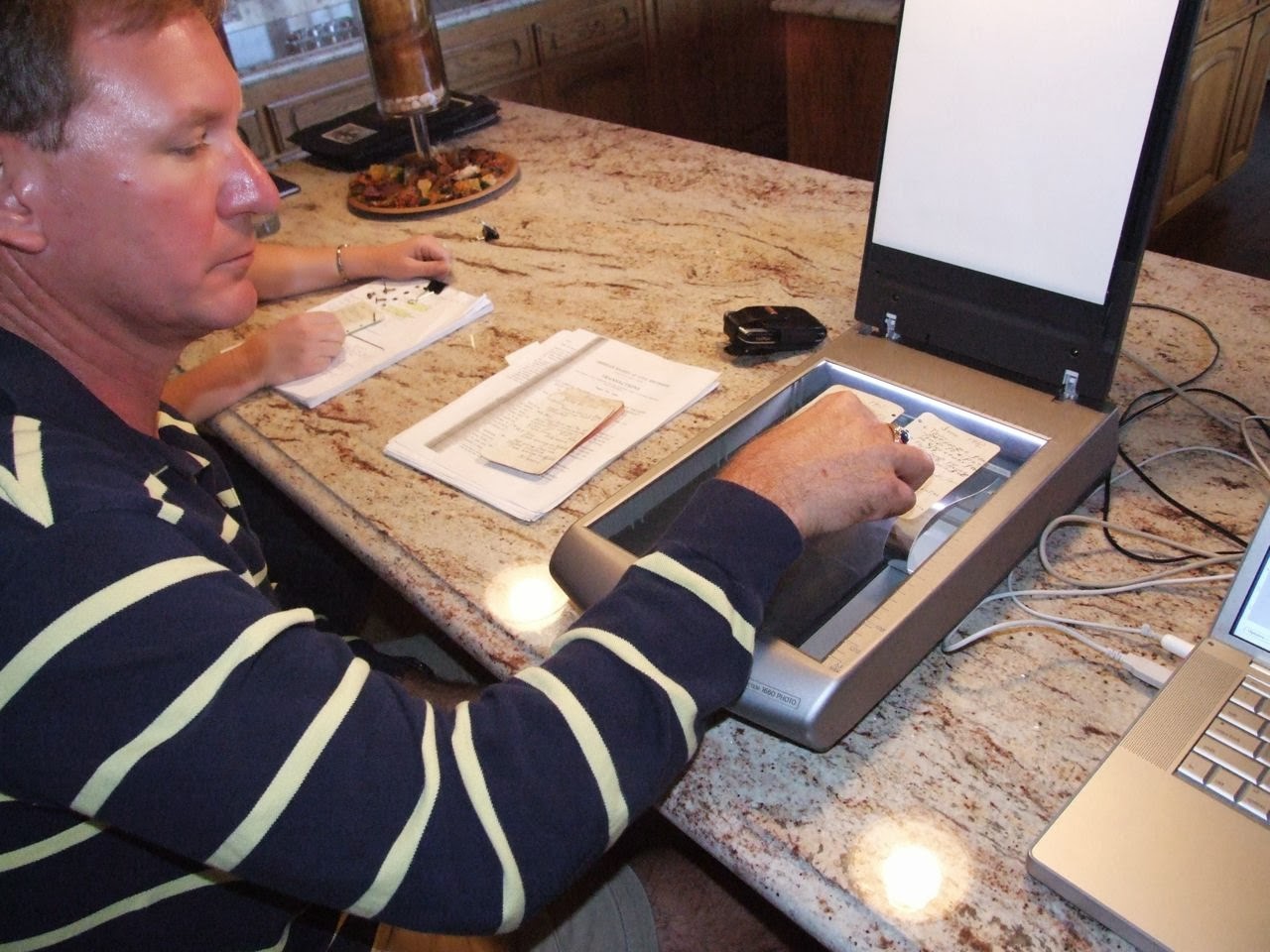 Above: Brian shown above scanning the 3" x 5" diary pages in 2009 at the home of Cliff's son, Fred Patterson. The careful high resolution scanning of this rare and precious document at 1,200 dots-per-inch took almost 4 hours!