Friends of the Saline Valley SALT TRAM
www.facebook.com/SalineValleySaltTram
SalineValleySaltTram@gmail.com
www.SaltTram.blogspot.com
**********
The Salt Tram's Ubiquitous "Malleable Iron" Washer: The Salt Tram was built using 650 tons of nuts and bolts, so it's not surprising that they standardized their parts as much as possible - none more so than the heretofore undeciphered "Malleable Iron" washer, as shown below (click on all photos to enlarge).

On a recent Salt Tram trip, we decided it was time to decipher the markings on this washer which we had seen everywhere and often. Why? Well, we were on the west side (Owens Valley) of the tramway on a recent trip. As on previous trips, we continue to discover nearby mines that clearly stripped the salt tram structures of wood beams and hardware to use in building their ventures. The massive salt tram beams were used to build head frames and shoring and houses and huts. The Salt Trams many bolts and washers were used to attach the "borrowed" wooden beams.

The above washer was photographed on a head frame in a wash near a mine on the westside of the salt tram. The MALL washer's markings were very clear, so I snapped a shot of it. The head frame is shown below (photo by Brian of Tim - our washer in the above photo is at Tim's right below): 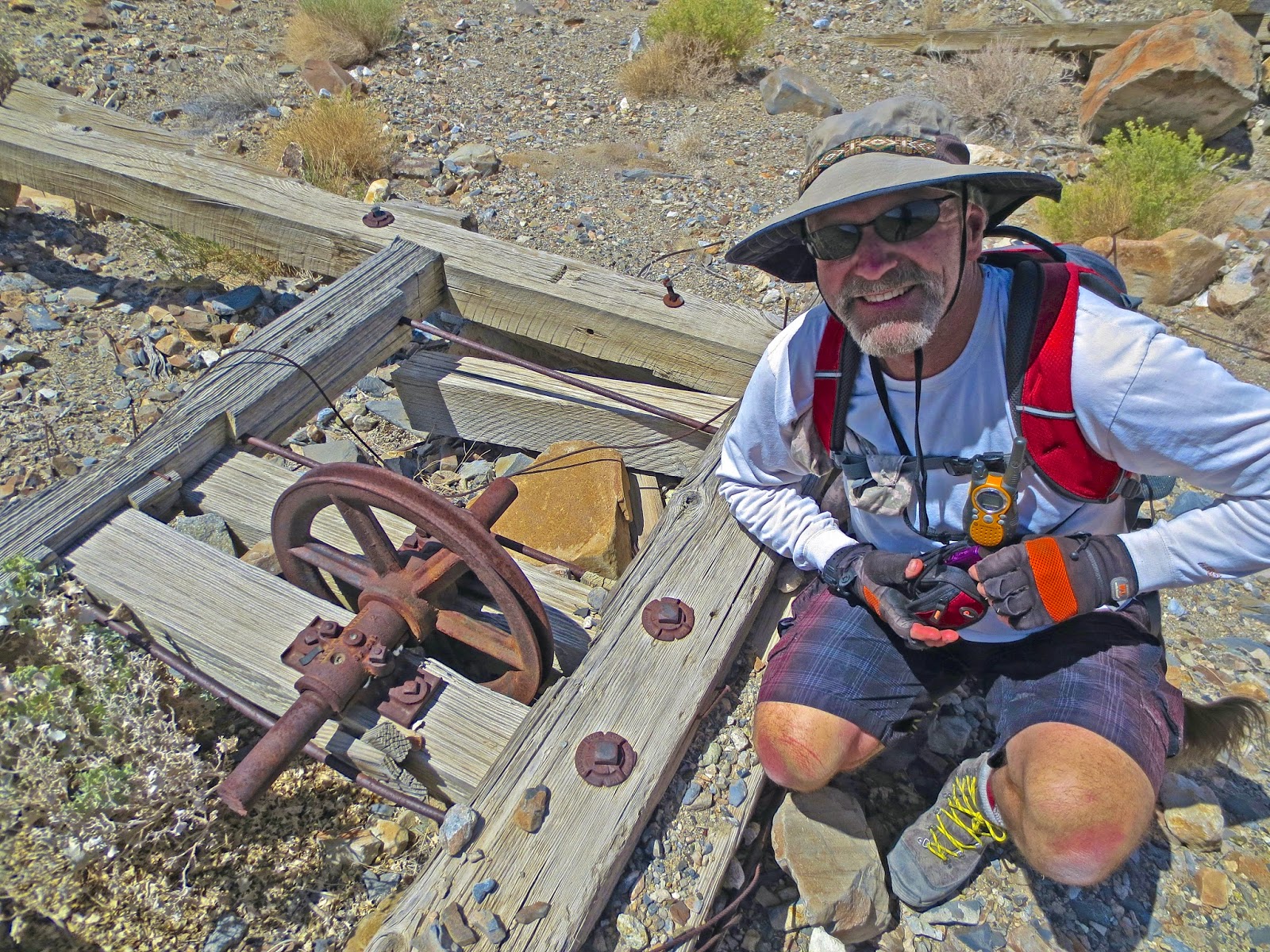 However, claiming to be researchers, we need solid proof that much of the salt tram westside towers and stations were carted off and used in these mines. The most solid proof clearly is the unique washers that accompanied the stolen timbers.

The salt tram used untold hundreds of thousands of these MALL washers, but in many of them, the markings are unreadable, often due to the large volume of corrosive salt nearby. On this particular trip, the markings on the head frames MALL washer were clearly visible. Now it was time to decipher them. Thanks to Brian and Tom, it has been done!

I think Brian got it right ("malleable iron"). Here is an example of the marking “Mall” still in use today.
https://www.fastenal.com/content/product_specifications/RW.MALL.P.pdf

Tom has always known these as mall washers, and the “MALL” stands for malleable iron.

MALL ¾ 10
“MALL” for mall or malleable iron washer.
“¾” for the size of the hole for the bolt
“10” probably refers to the yield strength of these “malleable iron” washers. 10 KSI was probably the norm for this form of ductile iron at the turn of the last century. I do not think they are made of iron anymore, but rather some form of cast carbon steel, which has a yield closer to 30 KSI, hence the “30” you see on most of the newer versions of these.

A few choice quotes from the above patent:

This invention relates to improvements in washers, and more particularly to washers commonly employed in connection with tierods and the like used for withstanding heavy strains, such as in bridge construction, roof construction, &c.

One object is to provide a washer which can be cheaply manufactured, is light, is very strong, and is capable of being made as a malleable casting.

There are a bunch of patents on these washers issued to Mr. Ette.
https://www.google.com/?tbm=pts&gws_rd=ssl#tbm=pts&q=ininventor:%22Charles+G+Ette%22

Below are a random sampling of the MALL washers en situ at the Salt Tram. Next, we'll need to see if every washer was marked identically to this one, or were there different dates and hence, different batches of washer production in use on the salt tram. 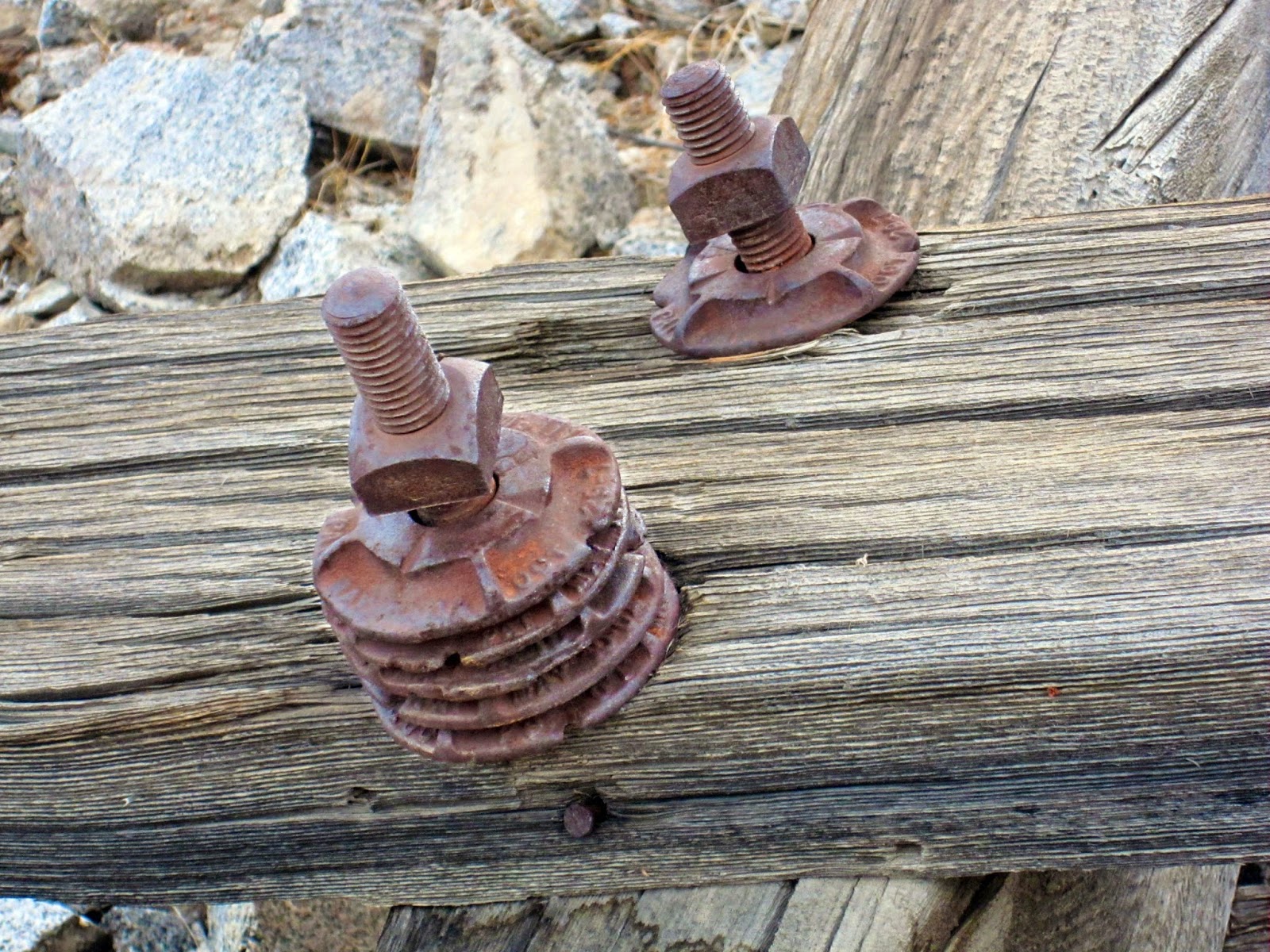 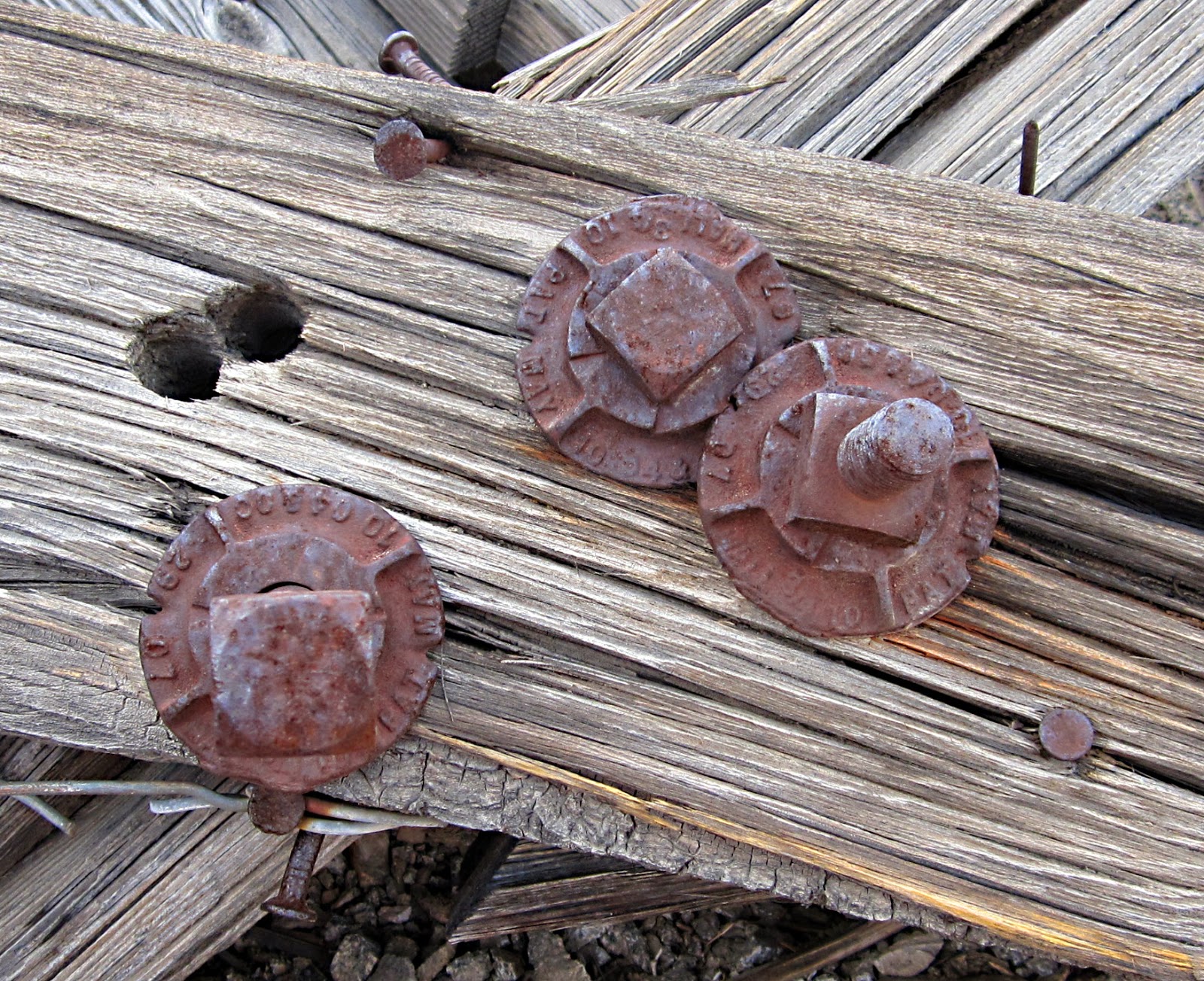 Above 2 photos: MALL Washers used to build the temporary tram structures used to move building material for the Salt Tram between Saline Valley and Motor Control Station 1 (station 7) at 2,500 feet of elevation gain above the valley. 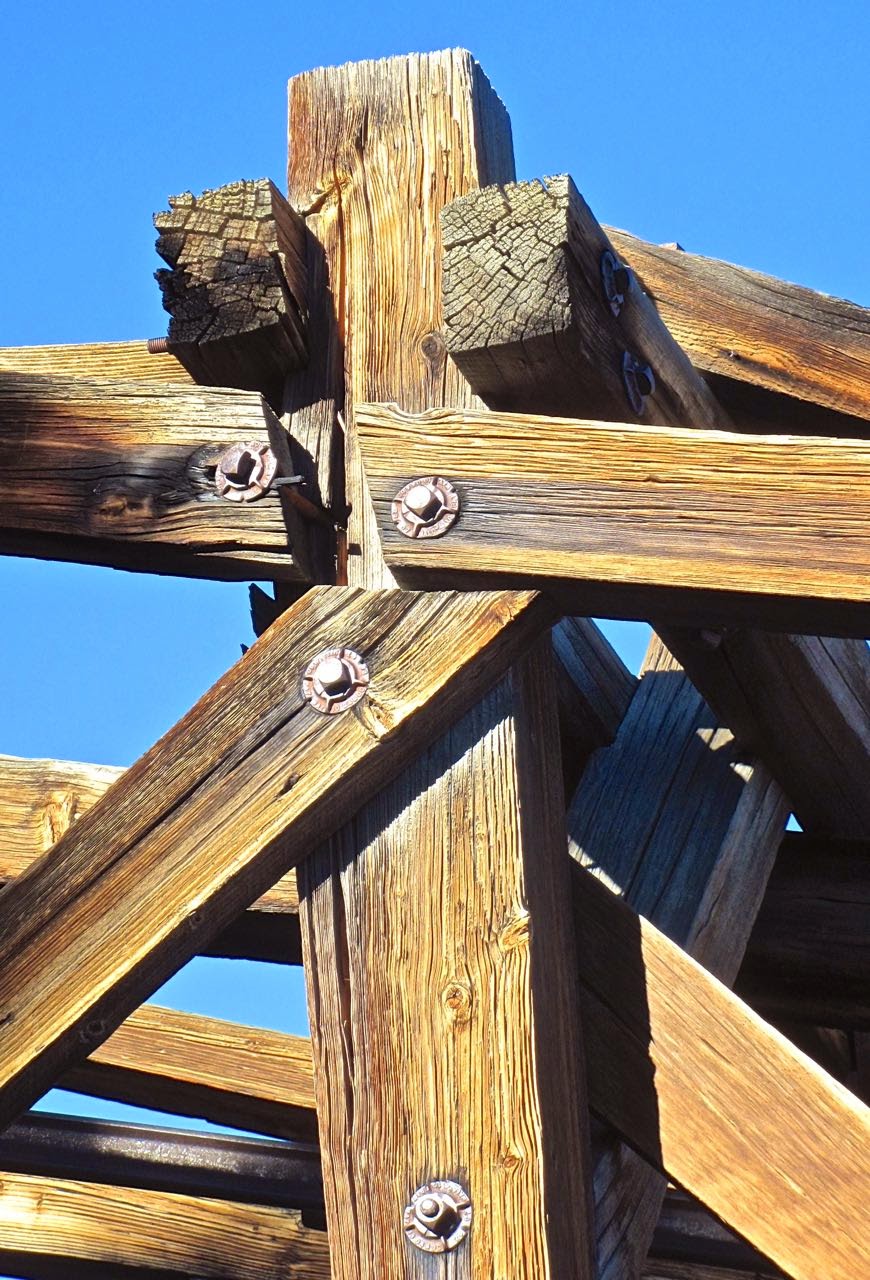 Above: Typical construction of a Salt Tram Station, using a plentiful supply of MALL washers. 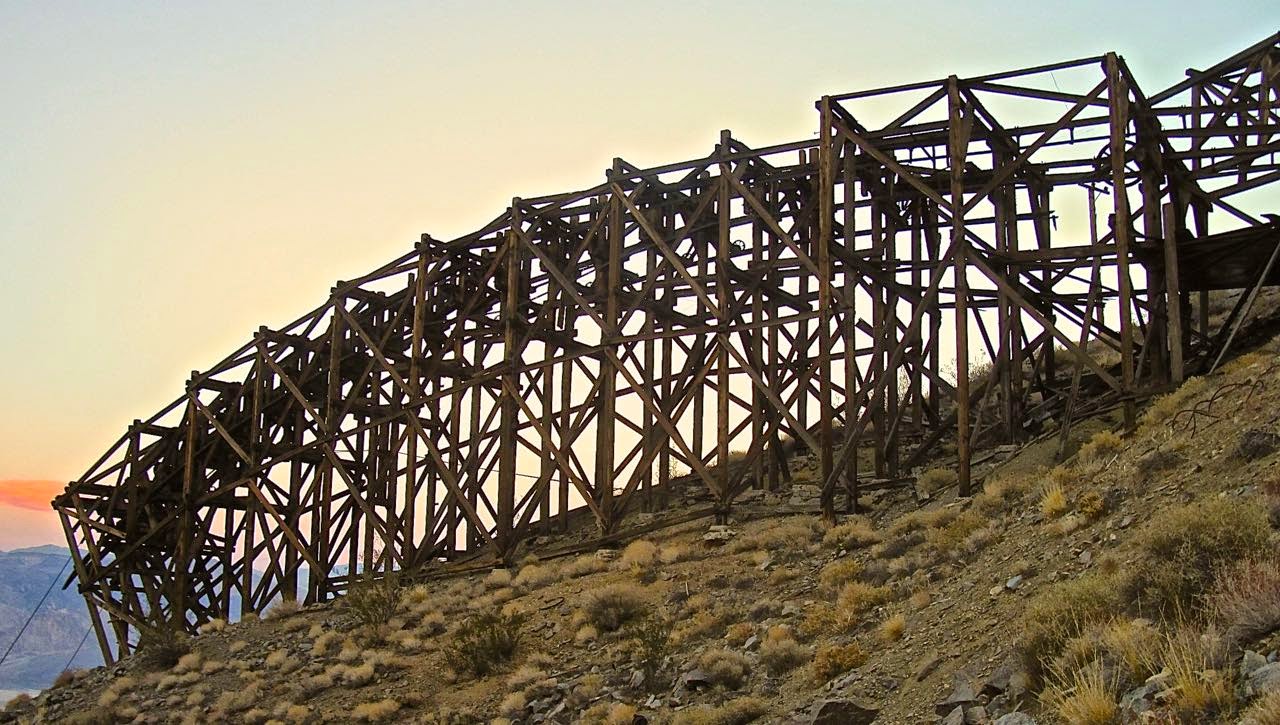