Friends of the SALINE VALLEY SALT TRAM
www.SaltTram.blogspot.com   SalineValleySaltTram@gmail.com
Three years ago, I obtained a copy of the diary of Henry Clifton Patterson from the Eastern Sierra Museum in Independence, California. Henry, or as his family refers to him, "Cliff", worked on building the Saline Valley Salt Tram between 1911 and 1913. He kept a detailed diary that somehow managed to escape the destruction of the hands of time. Though Cliff passed away in 1928, the diary lived on, and with it, a timeless recording of the hard work and determination that Cliff put into building the Salt Tram. 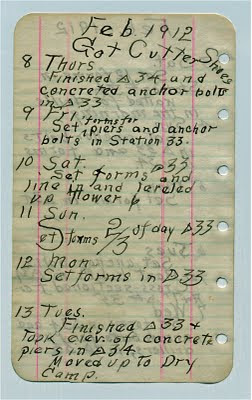 The first image in this blog post is the first page of the diary, dated Friday, December 1, 1911, which I have just begun to transcribe.I've also included two other random pages from the diary, so that you have an idea of what the diary is like, in general. It is written clearly with an ink bottle and an ink pen nib, as was standard in the day. Cliff had small but legible handwriting, and was diligent in making an entry practically every single day. This is not the last that will be heard of this diary on these blog pages (Don't forget to click on the diary page to see an expanded view of it).

We want to thank Mr. and Mrs. Fred Patterson of Bishop for opening up their home and hospitality to us. We were able to make 1200 dpi scans of all the diary pages, and in the interest of protecting the document for all time from the degradation caused by any handling of the paper on which it is written, we will be happy to provide high quality copys of the diary, along with a complete transcription and analysis of it, to anybody that would like a copy. Please contact Tim at SalineValleySaltTram@GMail.com if you would like a copy of this priceless artifact from a fast-fading era in American history. 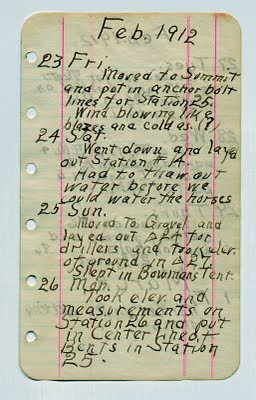 Despite the long passage of time since Henry Clifton's demise, I feel a great sadness that he died when his young son Fred was only 4 years old, and somehow feel that he was a strong, proud man who deserved to live longer than he did. RIP, Henry Clifton Patterson and God Bless you. 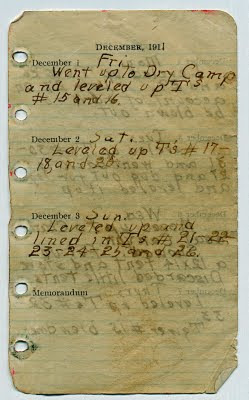 And their living with their In-Laws: