Origin of the Elusive "Go-Devil"

Friends of the SALINE VALLEY SALT TRAM
www.SaltTram.blogspot.com   SalineValleySaltTram@gmail.com
As the years pass, researching the true story of the Salt Tram is getting more difficult, as the abundant photos and written first hand accounts from that era find their way into landfills (instead of museums). We  are striving to rediscover the efforts of those who built and ran the Salt Tram, in order to give proper recognition to their hopes, dreams and abundant sweat from an era that is rapidly fading from our memories.
We are actively seeking out information about the mining of Salt in Saline Valley between 1903 and the 1950's, including: documents, photos, articles, stories, artifacts, etc. If you can help us out, please email us at the address above - Thank-you! --Tim and Brian Waag, the Waag brothers (aka E. Clampus Waagus).
Caution (PLEASE READ): Climbing around on the tramway is dangerous because its really old and defnitely unsafe, so don't even think about it. Shoot, just getting to it requires some perilous hiking, and if you don't believe me, just take a look at the Zig Zag Access Trail (or what's left of it). Plus, climbing on it weakens it and endangers your life. Also, the Saline Valley Salt Tram is on the National Register of Historic Places and should be treated with the respect that it deserves. What little remains is of great historic value, and should not be disturbed in any way. Heck, its probably against the law to move parts of the tram around, and certainly a crime to take home some of the few bits of it that remain (though you'd have to ask your friendly local BLM agent for details). So please treat it with the respect it deserves, so that future generations can enjoy whats left, without you messing it up. Really. Please. You can see its listing on the National Register of Historic Places at these web links:
National Register of Historic Places 1          National Register of Historic Places 2
******************************************************************
Lewis of GhostTownExplorers recently piqued my interest with a comment about the Go-Devil, a sled-type device used by the Salt Tram builders to drag heavy equipment large distances, pulling and dragging them into their final resting places amongst the Salt Tram line. Lewis mentioned the possibility of actually finding remnants of the actual device itself, although it is not clear whether more than one Go-Devil was actually deployed by White Smith’s many crews. This led us to be more determined than ever to re-walk the entire Salt Tram route, including the power pole routes, in order to seek out seldom-seen remnants of the Salt Tram builders. This is a possibility, given the spread-out nature of the Salt Tram over 13.5 miles of absolute wild country that is seldom, if every, explored. 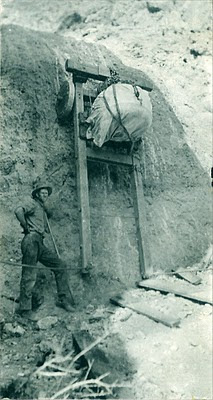 Interestingly, of the few photos we have of the Go-Devil, it is shown in various configurations, either indicating that there was more than one of them, or that they were reconfigured at-will by the crews for the task at hand. Photo 1 (courtesy of the Eastern California Museum) shows the Go-Devil with an electric motor for the Salt Tram being hoisted by a gas motor powered hoist, probably from Saline Valley up to Control Station I.

This also led me to be curious about the origins of the so-called Go-Devil. Turns out, all you have to do is google “Go-Devil” and the internet almost literally shouts out “The Go-Devil” was a crude sled used in the early timber industry in the Western states, when manpower was the only tool they had to deploy. The timber industry in the Western United States started in large-scale with the advent of the Gold Rush, when 150,000 white Europeans descended upon a wild land with no infrastructure whatsoever. The first lumberjacks deployed hand tools for felling and sawing lumber, as well as beasts of burden, mostly oxen, to drag the lumber from the forest to the crude hand-saw mills of the day. In this scenario was born the original use of the term “Go-Devil” to represent a natural Y-shaped tree where a few cross pieces of lumber were used to create a bed in which to cradle one end of a branch-stripped log was placed, and attached with a heavy chain to a horse or oxen team for transport to the mill. See Photo 2 & 3 (click on them for a larger version; photo 2 mentions the Go Devil in the first paragraph; photo 3 shows the earliest Go Devil design known on the West Coast). Go-devil's were the predecessors of modern day log skidders. 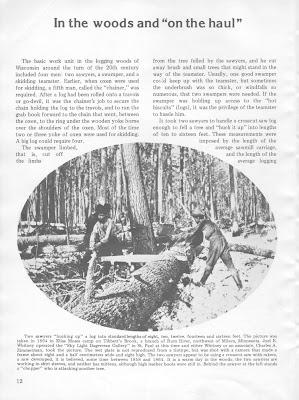 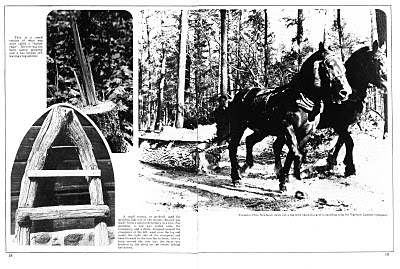 As expected, the original crude “Go-Devil” evolved quickly on the American West lumber scene in the 1860’s into something much more sophisticated than “finding a sturdy log with a crotch, and tacking some wood across it, and attaching it to a chain”. More sophisticated Go-Devils were developed by the lumber industry, culminating in the addition of wheels for dragging over more rugged landscape, as shown by this steel Go-Devil, also used to drag lumber, in more sophisticated (and later) times. See Photo 3. 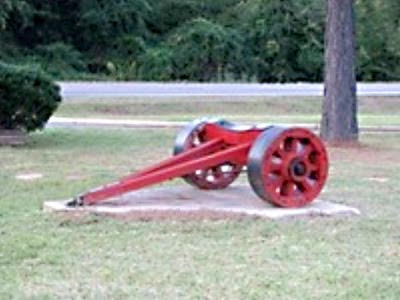 The term “Go-Devil” picked up other uses based on its well-known status as a reliable tool in the early lumber trade. For instance, there was spawned a similar device used on snow, also called a Go-Devil and used into modern times, as you can see in Photo 4 depicting a large ship receiving supplies in a sled caravan pulled over ice (the caption for this photo is “Offloading cargo onto D-2 at dawn on go devil sleds at McMurdo Sound, January 26, 1956"). In addition, a popular child’s snow sled was labeled and marketed as a “Go-Devil”, with obvious ties to the original device of the lumbermen. More tangentially, a speed boat and motor was developed with the Go-Devil brand, as well as a more general term used to indicate that something was fast or unusually effective. Referencing Dictionary.com, we find the definition of “Go-Devil” as follows: (1) a flexible, jointed apparatus forced through a pipeline to free it from obstructions; (2) a dart dropped into a well, especially an oil well, to explode a charge of dynamite or nitroglycerin previously placed in a desired position; (3) a hand car deployed on railroads; (4) a sled used to drag or carry logs, stone, etc.; (5) also called a sled cultivator, one that rides on wood runners and used on listed furrows. 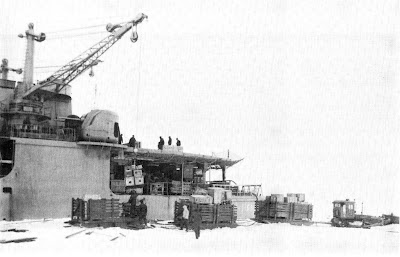 As unique as the Salt Tram’s Go-Devil may seem to be, its basic design has been used for centuries by native American Indians of the West. Originally pulled by domesticated dogs that were native to North America, they were later hitched to horses by the Indians to pull larger loads. Instead of the term “Go-Devil”, they were termed “Travois” by the French in early American, which was defined at the time by the Canadian French (from French word travail as a frame for restraining horses, and also the obsolete travoy or travoise) as a frame used by indigenous peoples, notably the Plains Indians of North America, to drag loads over land. See Photo 5 of a Cheyenne family using a horse-drawn travois, 1890. Also see Photo 6, a modern photo depicting the “Dog Travois” that was used by American Indians and witnessed very early on in North American history by the Spanish conquerors and noted in their journals. 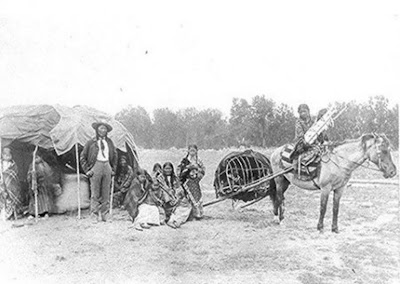 The basic construction of the Native American travois consists of a platform or netting mounted on two long poles, lashed in the shape of an elongated isosceles triangle; the frame was dragged with the sharply pointed end forward. Sometimes the blunt end of the frame was stabilized by a third pole bound across the two main poles. The travois was dragged by hand, sometimes fitted with a shoulder harness for more efficient dragging, or dragged by dogs or horses (after the sixteenth-century introduction of horses by the Spanish). A travois could either be loaded by piling goods atop the bare frame and tying them in place, or by first stretching cloth or leather over the frame to hold the load to be dragged. Although considered more primitive than wheel-based forms of transport, on the type of territory where the travois was used (forest floors, soft soil, snow, etc.), rather than roadways, wheels would encounter difficulties which make them a less efficient option. As such they found use in New France's fur trade by Coureurs des bois, who traded notably with the Plains Tribes. Boy Scouts and similar groups still receive instruction on how to build a travois and it is suggested as a method of transporting a sick or wounded companion when the option of leaving the patient cannot be considered. It is possible for a person to transport more weight on a travois than can be carried on the back. 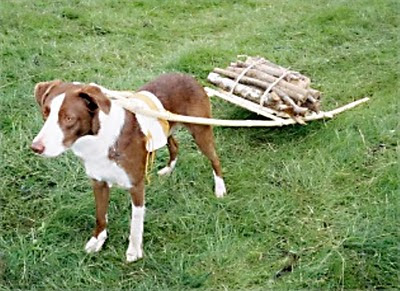