Friends of the Saline Valley Salt Tram
SaltTram.blogspot.com    SalineValleySaltTram@gmail.com
As the years pass, researching the true story of the Salt Tram is getting more difficult, as the abundant photos and written first hand accounts from that era find their way into landfills (instead of museums). We  are striving to rediscover the efforts of those who built and ran the Salt Tram, in order to give proper recognition to their hopes, dreams and abundant sweat from an era that is rapidly fading from our memories.  We are actively seeking out information about the mining of Salt in Saline Valley between 1903 and the 1950's, including: documents, photos, articles, stories, artifacts, etc. If you can help us out, please email us at the address above - Thank-you! --Tim and Brian Waag, the Waag brothers (aka E. Clampus Waagus).
Caution (PLEASE READ): Climbing around on the tramway is dangerous because its really old and defnitely unsafe, so don't even think about it. Shoot, just getting to it requires some perilous hiking, and if you don't believe me, just take a look at the Zig Zag Access Trail (or what's left of it). Plus, climbing on it weakens it and endangers your life. Also, the Saline Valley Salt Tram is on the National Register of Historic Places and should be treated with the respect that it deserves. What little remains is of great historic value, and should not be disturbed in any way. Heck, its probably against the law to move parts of the tram around, and certainly a crime to take home some of the few bits of it that remain (though you'd have to ask your friendly local BLM agent for details). So please treat it with the respect it deserves, so that future generations can enjoy whats left, without you messing it up. Really. Please. You can see its listing on the National Register of Historic Places at these web links:
National Register of Historic Places 1          National Register of Historic Places2
******************************************************
QUESTION 1: Match the Salt Tram photo that references the "pictographs" with the area around Owens Lake to determine where the photo was taken.


******************************************************
Introduction: Fred had the idea a few months ago to hike from the Salt Tram Summit in the Inyos all the way down the old pack trail along the tram route to the Saline (pronounced by locals as SLEEN or SUH-leen) Valley in a single day. We had certainly not done it in one day before, as we usually did it as a 2 day with an overnight stay at Control Station 2 (Station 15). We checked around, and there was enthusiastic interest in Fred's idea, so it was a go! We rounded up the usual suspects, along with a new one or two, and we were in business. Although this Summit-2-Sleen hike would be the focal point of the trip, we did do a few other Salt Tram-ish things on this trip (as well as numerous other interesting non-Salt Tram-ish stuff that will not be included in this report. On with the fun! Below: Moonrise over Control Station I (click to enlarge). 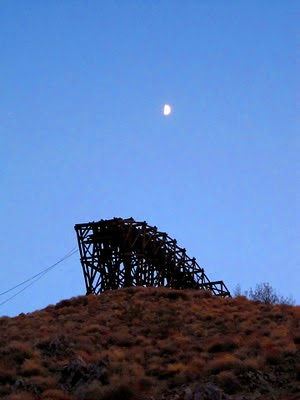 A1 - Find the Swansea petro site and explore? Done. Ironically, we became curious about these petros because of a historical Salt Tram photo that made reference to them! The photo mentions pictographs, rather than petroglyphs, but that still got our interest. We are not able to match the photo to the mountains in the area to see if we could identify where the photo was taken - that'll have to wait for another time. See photo below. 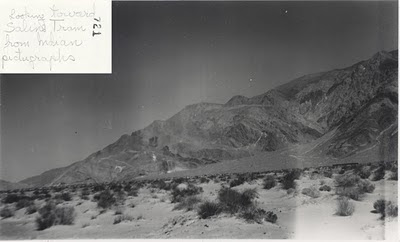 Also, thanks to Earl for meeting us at the petros to give us his take on these unusual petroglyphs. Part of what makes them unusual is that they are carved, not into heavily patinated volcanic rock, but a light marble-dolomite rock that gives them a different look from your more typical Death Valley-area petroglyph. Below: Earl at Swansea Petroglyph site. 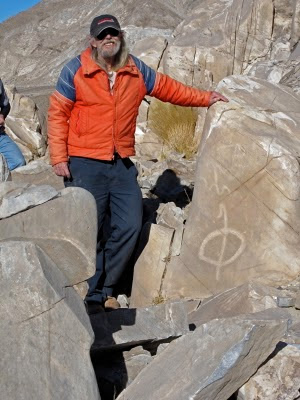 You can find out a bit more about these petros online at these sites:
Harry Helms Blog
Equinox Project
Reminder: the Swansea Petro site, like so many others, has been heavily vandalized and abused. Please respect this site. I know it sounds obvious, but don't walk on the petros, and certainly don't re-peck them, as has been done here. Sadly, the real damage was done to the site by a mining operations that used this site as a gravel quarry (so I've been told - I do not have independent confirmation of this, but it looks right).


A2 - Find the lower Salt Tram construction camps on the west side of the tram? Started. Found one (Flagstaff camp). See blog entry: Construction Camp: Flagstaff

A3 - Detailed exploration of the lower west side tramway and facilities? Progress made (area below CS IV). We explored the area shown on this map below, including the towering Station 31, which we measured to be 54 feet tall! 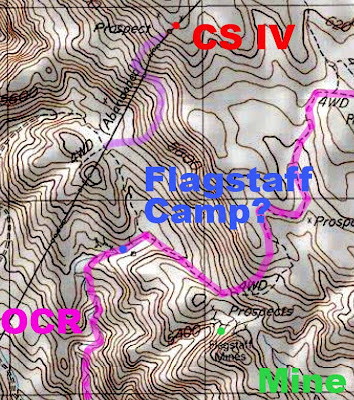 B1 - Which Station has the wood water pipe next to it? Station 18.
B2 - Document anchorage of 1.25 inch (heavy) track cable and 7/8 inch (light) track cable between Summit Station and station to the East? Done, but awaiting photos from Alan Station 18 has 2 Weight Boxes which would tension the 2 track cables that go to the summit station; both Weight Boxes are sitting on the ground. The heavy track cable is still attached to its Weight Box, but the light track cable is not attached to its Weight Box. See photos. New Question: Station 18 Weight Box for 7/8 inch track cable is not attached - where is the detached cable?
B3 - Evaluate pack trail around the hump near “cut limb 14” waypoint on map? Did not find. Alan indicates no discernable trail at all. I’m surprised by this answer, as I've seen it several times, and its hard to believe its completely washed away. Its possible that Alan was either looking in the wrong place, or just didn’t have enough time to find it.
B4 - Hike from CS II to Station 13, 12, and 11 and identify trail in confused area? Did not make the hike.
B5 - Identify original trail on final approach to CS II from above? Did not have time.
B6 - Photos of “May Pole” (temp tramway structure) next to CS II from various angles? Done (awaiting photos from Alan).
B7 - Examine lower dump below CS II above trail? Did not have time.
B8 - Historical Zig Zag photo - recreate photo? No. Tried but ran out of time.
B9 - Structural integrity of CS II - photos? Done (Alan reports only 3 support beams below the station deck appear to have any damage whatsoever - a very small number). Awaiting photos from Alan.


Observation below Control Station IV:
We had a short amount of time to drive up the Swansea Grade and hike the newly discovered pack trail that ran from Control Station IV (CS IV) to the modern Swansea Grade Road below (note that the trailhead located at 36 33.630 117 54.023). We have a goal of making detailed observations of the entire Salt Tram route, and the newly discovered pack trail gave us a good reason to cover this area next. On previous occasions when we have hiked along the West side of the Salt Tram, we would find snippets of pack trails (single track) to go along with the numerous wagon (and auto) roads that were built to construct and maintain the tram. It slowly dawned on us that there was a pack trail along the entire West end of the Salt Tram. The extensive Salt Tram pack trail on the East end of the Inyo's existence is well known, if not well-defined! However, the pack trail's existence on the West side is probably known only to us. The diary of Cliff Patterson tells us that Cliff worked as the operator at CS IV when it first began operation in 1913, and it is likely that he used this pack trail extensively when he traveled between CS IV and Swansea. Knowing that we were walking along a trail extensively used by Cliff was exciting!

We killed alot of time early in the day on other projects, and only had about 2.5 hours to spend on this activity, which was just not enough time to cover it all.  Below: view of the pack trail as it winds below CS IV (click to enlarge).