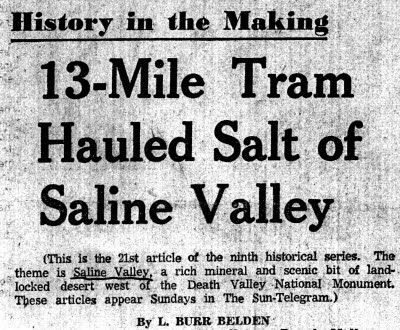 For some reason, this blog doesn't post the photos in the order I am trying to put them in. Perhaps I'll figure out what order it lists them, so that I can control that order. Until then, they'll just be randomly posted.

I got a copy of this article from the Eastern Sierra Museum, and the copy is absolutely lousy. The article doesn't give too much good information about the Salt Tram, but does provide a few good leads. The older the article, the better the information, I have found.

Here's my summary of the document.

Current Status: Have contacted the Sun (no longer the Sun-Telegram) to see if I can get a copy of the original articles, and perhaps the original photos, as the copy I have contains only 6 of the 9 referenced photos. I photocopied a photocopy at the Eastern Sierra Museum (ESM), so the quality is really, really, bad!

New Information / Leads: • Period of greatest Salt Mining activity via the Salt Tram was 1910 - 1918 (the Salt Tram was first run on July 2nd, 1913) • May 1902: Calif. State Minining Bureau published a county-by-county survey of salt mining, and reported only minor local use made of the Saline Valley salt deposits; extensive deposits of pure rock salt were discovered in1864 • Commercial operation started in 1913 after over $300,000 had been spent on building the mining operation • There was a rail spur to the tram terminus, and on the railmen’s timeables it was named “Tramway”, but no such station appeared on public tables • Tram operation terminated in 1930 at the start of the depression (I thought it ended in1932), but they didn’t think the recession would last long, so posted caretakers at the tramway for some time • Tramway eventually sold to Al Noren of Big Pine for a $1, and he was the only bidder; Noren salvaged some of the more accessible material (cable, buckets), but left the remote material where it remains today • “3 miles S of Beveridge Canyon is Saline Camp, the region’s one-time metropolis. Just No of the camp is a miner’s home with a road sign inviting travelers to help themselves to water, if they don’t shoot or steal his burros (wonder if this is the Conn-Trudo Borax Works?) • At the time of the article, loading platforms still existed at the Salt Lake, and I believe are shown in the fuzzy photos accompanying the article; also adds that a few resistance coils and foundations of the power plant (not sure what he is talking about - what power plant? they got power from the hydro-electric plant in the Eastern Sierras?).

Interesting Facts Not Related to the Salt Tram: author references the ghost town at Belt Spring (“a small colony of permanent residents”) • references the “old indian trail down Marble and Cottonwood Canyons down to the Death Valley Floor” • references the “small mining community of Wacuba - a collection of miners cabins and mine shafts” • Apparently during 1960ish, there was a highway sign along Saline Valley Road that listed the mileage to Beveridge, which got its named, according to the author, from the 1912 Bull Moose Party, which is obviously not true. • there are several camps in Grapevine Canyon (from another source: Areas of particular archeological significance within the park boundaries include Butte Valley, Mesquite Flat, the floor of Death Valley, Grapevine Canyon, high elevation localities in the Panamint Mountains, alluvial fans on the west side of Death Valley, and springs; perhaps the author is referring to Indian camps?)

The link above states in part: