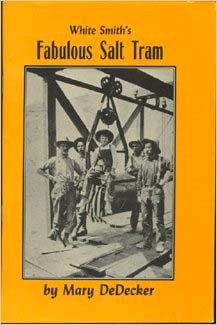 Above: This title "Welcome to White Smith's Marvelous Salt Tram" is a respectful rip-off of Mary DeDecker's Death Valley 49ers Keepsake booklet  No. 33 (44th Annual Death Valley '49ers Encampment, November 10 - 14, 1993) entitled "White Smith's Fabulous Salt Tram". Its a wonderful booklet, written by a wonderful person (whom I have never met, and she is no longer with us), and one of the first Salt Tram documents that we read, and helped to interest us in this "Fabulous" endeaver, the Saline Valley Salt Tram! 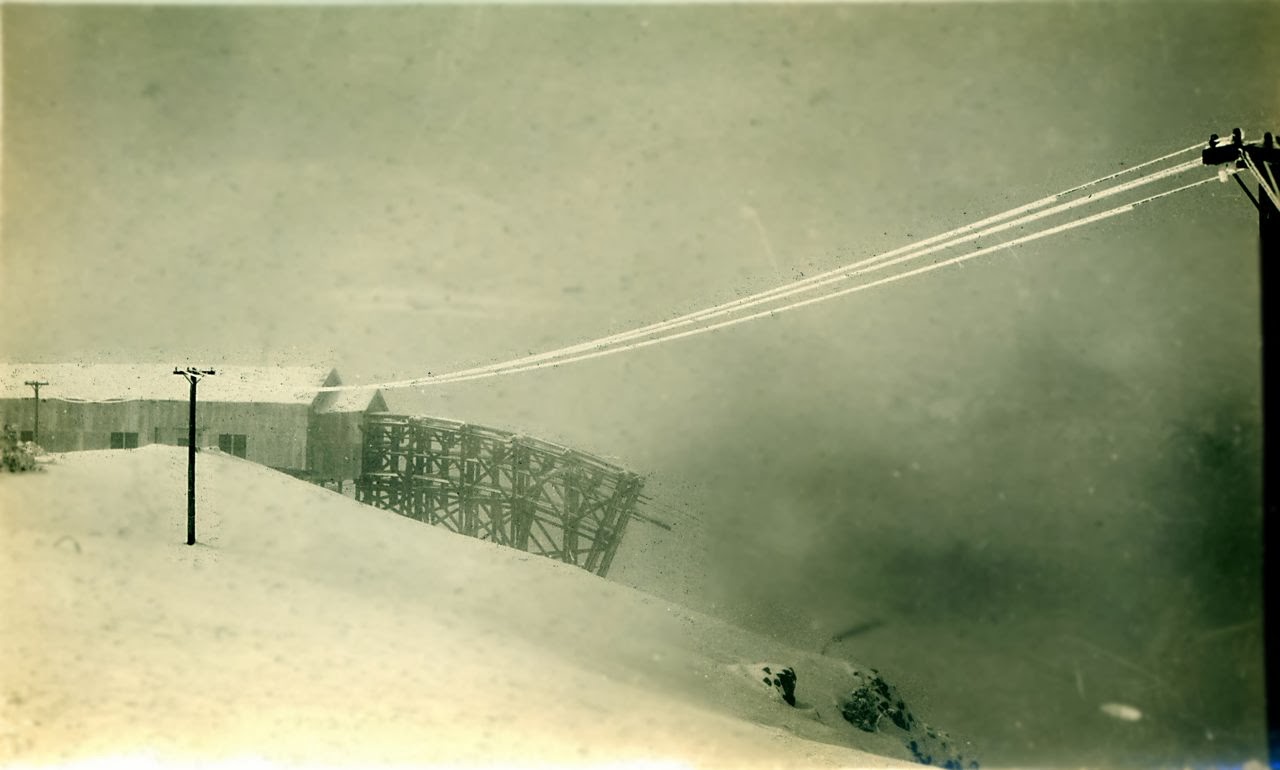 Above (please click to enlarge): Historical photo of the Salt Tram Summit Station (Motor Station Number 3) during a snowstorm. Photo Courtesy Eastern California Museum, Independence, Calif. It is one of my favorite photos of the Salt Tram, as it shows the powers of nature, and the difficult environment that the builders and the operators would face in operating in such a challenging environment.

Introducing the Waag Brothers - Tim and Brian: Longtime brothers Tim and Brian Waag have been adventurers and explorers since they were kids growing up together in Southern California. One of their first adventures involved getting lost at the Death Valley Sand Dunes at night (distances in the desert are farther than they appear!), when they attempted to cross them late in the day, and had their mother wandering along the highway 3 hours after dark, tears in her eyes, wondering if they would ever come out alive! Since then, they've rarely finished a hike with any daylight left in the skies, as the draw of desert exploration pulls them every deeper into the unknown.

It's difficult to write a short introduction to something like the Salt Tram, just as it is difficult to describe the attraction to something that on its face, is merely a mundane device for transporting salt that has long since passed its usefulness. Tramways used in mining operations hit their peak in the 1910's and the 1920's, so the Salt Tram represents the pinnacle of their technical development. Technically, the Salt Tram was of the "Double Rope Bleichert patent" design, and was designed and built by the Trenton Iron Company (Trenton, New Jersey), a wholly owned subsidiary of U. S. Steel.

Of course, tramways like the Salt Tram are still in use - only they are now only found at ski resorts! Yep - look closely, and you will see that ski lifts operate in the same general manner as the Salt Tram, so tram technology still lives on. However, it is a different story for mining operations. Where trams were once used, today they have been replaced with large earth moving trucks and / or conveyor belts. New mining tramways are no longer being built in the modern world, and the Slat Tram represents the last of its era. 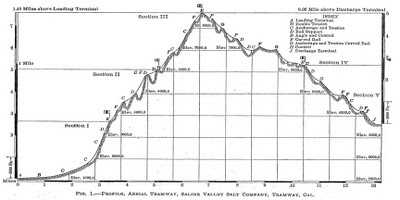 Above (Click to Enlarge): Diagram of Salt Tramway over the Inyo Mountains; this diagram appeared in the May 1917 issue of the ASCE (American Society of Civil Engineers) document. It gives you an idea of the magnitude of achievement to build a tram that starts in Saline Valley and goes up and over the Inyo Mountains and into Owens Valley.


More than you want to know about the Waag Bros.: The boys grew up in El Segundo, next to LAX, where Brian found lifetime employment as an Electrician and later, as a Procurement Manager for Chevron. Tim headed up the road, to get a BS in Math and Computer Science at UCLA, followed by an MS in Management Science at USC. After 12 years of software development work at TRW, Tim and his family moved to San Luis Obispo in 1992 where they currently reside, and where Tim is an office manager for a law firm.

White Smith and the Salt Tram: The real story here, of course, is the every increasing pull of the Salt Tram itself. Saline Valley Salt Co. President White Smith served as a key player throughout the life of the Salt Tram. White Smith began mining Salt in Saline Valley in 1903, and hauling it out via North Pass in wagons. Later, when the Los Angeles Aqueduct required hydro-electric power in order to be built, the solution to the problem of how to transport Salt out of Saline Valley became obvious: build an electric-powered tramway!  Plans to build the tram were formulated beginning in 1910, the tram construction began in 1911, and on July 2, 1913, the first bucket of Salt came out of Saline Valley in a tram bucket! The stock market crash of 1929, along with a subsequent plunge in the price of Salt, and the tramway was operated for the last time. But it was built to last, and but for the vandalism and salvage that has occurred since, much of it should still be standing today.

Repeated visits to the Salt Tram emboldened the Waag Brothers to learn more, and in learning more, found that it has never been thoroughly investigated and documented for the wonderful, crazy idea from another time that it represents. They decided they were up to the challenge of drawing in as much as there is to know about the amped up ambition of local Bishop attorney White Smith, and his desire to build what is referred to as “White Smith's Fabulous Salt Tram”. Above (click to enlarge): Brian and Tim giving a presentation on the Salt Tram to the Historical Society of the Upper Mojave Desert, located in Ridgecrest, California. Brian at left with mic; Tim at right.

Presentations: The Waag brothers frequently give presentations on all aspects of the Saline Valley Salt Company tramway, as well as other topics where they have done extensive investigations (library and field). The presentation begins with the genesis of Tennessee-born White Smith's inspiration to build this truly one-of-a-kind Saline Valley salt mine and 13.5 mile tramway over the entire Inyo Mountains to Owens Valley and its railroad spur. Tim and Brian will then lead a guided pictorial tour of their hazardous 3 day trek along the entire Salt Tram route, starting in Owen's Valley and ending in Saline Valley. Finally, they will focus on the many mysteries that still confront them regarding the Salt Tram's construction, operation, bankruptcies, wild bucket rides, and ultimate demise. The Eastern California Museum (760) 878-0258 in Independence, California (in the remarkable Owens Valley) is currently seeking historical resource information about the Salt Tram, including but not limited to photos, artifacts, stories, and documents - if you have information that could assist with this effort to preserve the history of this magnificent monument to  the "can-do" attitude of the pioneers of Owens Valley, it would be most appreciated.