Question1: Did the author (Willma Willis Gore) write a previous article about the Salt Tram? If yes, then track it down as well.

Question2: Compare photo 8 to our photo of the Salt Tram dryer foundation to see how much is missing today.

Question 3: Continue to try and track down Bledsoe Photo Co., L. A. Cal. and find some more Bledsoe photos.

Question 4: track down photo contributors to this article: the late Ruth Willis Hunter (aka Mrs. Bev Hunter), Willma Willis Gore, Howard McAfee, Carl and Hazel McAfee (pictured in a photo riding the buckets), John A. Simpson, Edward Shepherd of Independence lost $5,000 in the 1940’s (he did ride in the buckets to inspect his investment). 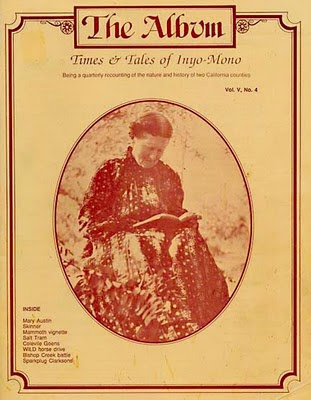 Article Title: Ghost of a Skeleton Revisited
By Willma Willis Gore
The Album: Times and Tales of Inyo-Mono
Page 2832
Being a quarterly recounting of the nature and history of two California Counties
Vol. V, No. 4
October 1992
Published quarterly by Chalfant Press, Inc.
Copyright October, 1992


Sample page form the article below - page 4 of 5 (click to enlarge) - bottom of 2 photos in the page below is Photo Number 7: 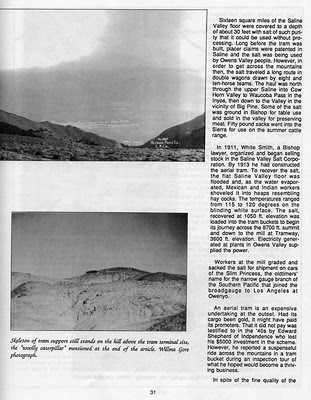 Synopsis: Short 6 page article on a revisitation of the Salt Tram by the author, who is believed to have written a previous article on the Salt Tram. Contains 9 photos of moderately poor quality, but lists names of those who provided the photos.

Source: Sue found a copy of this article in the Independence Free library in November 2009, where we got our original copy of the publication. Subsequently, we got a copy from Linda B. of Independence, who had 2 original copies of the magazine and was kinda enough to donate one copy to us - Thanks, Linda!!!

Current Status: Our copy of the magazine is in good condition, and at the end of our research, I plan on donating it to the Eastern California Museum for their Salt Tram Library.

Photographs (none of the photos in the article are dated) - Photo 9 shown below (click to enlarge) - this photo was taken as the bucket was coming into Control Station 4 on the west side of the Inyos: 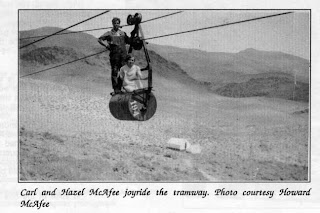