In Search of North Pass Route into Saline?

Friends of the Saline Valley Salt Tram
SaltTram.blogspot.com    SalineValleySaltTram@gmail.com
As the years pass, researching the true story of the Salt Tram is getting more difficult, as the abundant photos and written first hand accounts from that era find their way into landfills (instead of museums). We  are striving to rediscover the efforts of those who built and ran the Salt Tram, in order to give proper recognition to their hopes, dreams and abundant sweat from an era that is rapidly fading from our memories.  We are actively seeking out information about the mining of Salt in Saline Valley between 1903 and the 1950's, including: documents, photos, articles, stories, artifacts, etc. If you can help us out, please email us at the address above - Thank-you! --Tim and Brian Waag, the Waag brothers (aka E. Clampus Waagus).
Caution (PLEASE READ): Climbing around on the tramway is dangerous because its really old and defnitely unsafe, so don't even think about it. Shoot, just getting to it requires some perilous hiking, and if you don't believe me, just take a look at the Zig Zag Access Trail (or what's left of it). Plus, climbing on it weakens it and endangers your life. Also, the Saline Valley Salt Tram is on the National Register of Historic Places and should be treated with the respect that it deserves. What little remains is of great historic value, and should not be disturbed in any way. Heck, its probably against the law to move parts of the tram around, and certainly a crime to take home some of the few bits of it that remain (though you'd have to ask your friendly local BLM agent for details). So please treat it with the respect it deserves, so that future generations can enjoy whats left, without you messing it up. Really. Please. You can see its listing on the National Register of Historic Places at these web links:
National Register of Historic Places 1          National Register of Historic Places2


The link below shows an A. A. Forbes photo of a wagon team hauling salt. We believe that the wagon is on the North Pass Wagon Route that we are seeking:

"Long before the tram, placer claims were patented for use by Owens Valley people. Salt traveled in double wagons drawn by 8 to 10 horse teams. It was hauled north through the upper Saline Valley into Cow Horn Valley to Waucoba Pass in the Inyos, then down to the Valley in the vicinity of Big Pine." 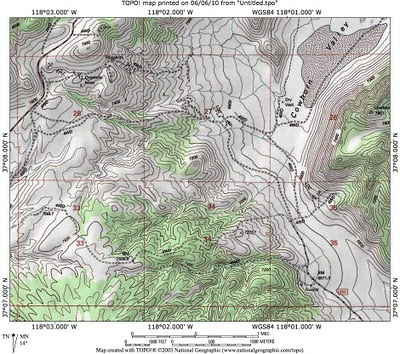 The 101 mile route starts at the Tramway Slim Princess Line siding north of Swansea, heads up Owens Valley to Big Pine, then cuts east up the current highway near the Overholtz Mine, then heads down Cowhorn Valley to Waucoba Wash, which leads almost all the way to the Salt Lake. We suspect that the construction materials bound for Saline Valley was not dumped off at Swansea, but instead was unloaded onto wagons at a location much closer to the North Pass wagon route, such as Big Pine. If that was the case, that would explain much of the discrepancy between the reported 75 miles, and our measured 101 mile route. 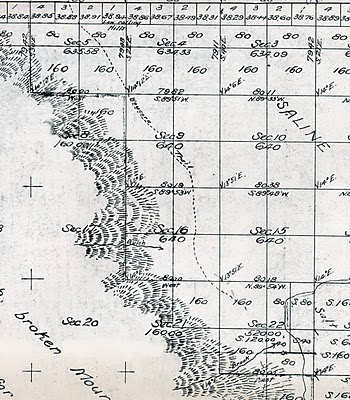 Below is a photo from the Inyo Register (around 1911) that shows a photo of the Salt Tram wagon route via North Pass. Though the caption from the newspaper says "Waucoba Road, in the White Mountains", the photo has a caption written on it in the lower lefthand corner that says "Narrows Coldbelt Canyon". Hmmmmmmm. Mike and Jim are gonna figger this one out (we hope).


Once we find the route, we want to hike it or drive it (or both), just to see where the Salt Tram gear was hauled by wagon into Saline. We don't expect to find any Salt Tram-related artifacts, but we might. 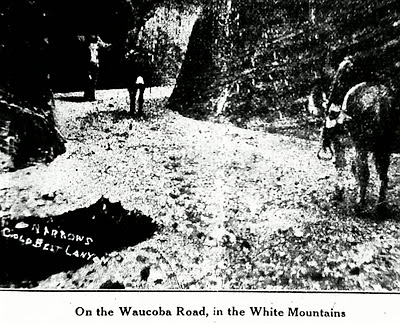