**********
QUESTION 1: Compare the text writing on this postcard to the writing used by A. A. Forbes to determine whether this is a Forbes photo or not. Right now, we sadly believe that we were duped, and that it is NOT a Forbes photo. Doc-007 indicates that this photo was taken in the Summer of 1911 when the Salt Tram was still under construction.

QUESTION 2: Cross reference Summer 1911 with the construction in this area of the tramway to see if perhaps Cliff Patterson (Salt Tram Diarist) had worked on any of these towers shown in the postcard.

**********
Update February 2014: We now believe that this postcard was NOT taken by A. A. Forbes, but was instead taken by a Salt Tram "Constructing Engineer". See page 4 of Doc-007, which shows this same EXACT photo. Read about Doc-007 by clicking here.

Note that this is the exact same photo that we bought as a postcard on eBay that was attributed to A. A. Forbes. It has the classic white text annotation which was generally written onto the negative of the photo, but no A. A. Forbes name on it. This leads us to believe that this photo was NOT taken by A. A. Forbes. Note that it also identifies the photo as having been taken "last summer" (which would be Summer 1911), and that "work has now been completed" [on the section of the tram line shown in the photo].

Of course, I was thrilled to get this email, then took a quick look at the link he provided for the eBay auction item. The item in question was an A. A. Forbes postcard depicting the Saline Valley Salt Tram. The caption in the photo read “Tramway under construction, SALINE VALLEY SALT CO., Inyo, Calif.”, but no mention of A. A. Forbes. Forbes, like most other photographers of his day, included his name in his photos, but its missing on this one. That omission, of course, called into question whether or not this was really the work of Alexander Forbes. Also, I was disappointed to realize that it was a postcard, and not an original Forbes photo print. Oh well.

I emailed a neighbor who frequented eBay auctions as both buyer and seller, and asked if he could work his magic on this one for me. On 10/1/2011 when the auction closed, my friend Nick G. had won the bidding, overpaying at $78.77 plus $2.95 shipping and handling, for a grand total of $81.72. But it was mine, and it arrived in the mail yesterday (10/8/2011) and I was thrilled. The seller was a Robert Varlotta of Rancho Palos Verdes, Calif.; you can bet I’ll be following up with Robert to see what other A. A. Forbes or Salt Tram stuff he might have.

My plans for the postcard are to scan it at high resolution (done), then donate it to our friends at the Eastern California Museum (done) and take the tax deduction! In the meantime, a few observations about the postcard:

2. TEN TALL TOWERS IN A ROW: The photo shows a section of very tall towers spaced very closely together - ten towers in a row to be exact. We don’t believe that this occurs anywhere else along the tramway - especially towers of such height. Remember, again, that these towers are now gone, with only scattered concrete foundations to show they were ever there.

3. TRAMWAY CONSTRUCTION ERA: The tow tall towers in the foreground of the postcard are similarly missing today. However, they are shown without any tram cables attached in the postcard, neither traction nor track cables. This means this is a construction phase photo, which are also more rare than operational photos.

4. ON-SITE PHOTO EVALUATION: We’ll be taking this photo out to the Salt Tram and investigate the particular location in which this photo was taken, as well as examine the two-tower and ten-tower cluster site. Its possible that there were ultimately additional towers in this section of the tram that were not built yet. Historical photos show the addition and removal of towers over time. This was surely done on an “as-needed” basis in order to fine-tune the operation of the tram.

5. CONSTRUCTION ROADS: Another contribution that this photo makes is that it reveals the roads that existed during construction to support the building of the tramway (see postcard photo showing the roads in the area). Again, we’ll visit the site and map the roadways and add them to our master map of pack trails and roadways that serviced the Salt Tram.

7. MANY THANKS TO: Bob Edberg of Piedra Pintada books for alerting me to this eBay auction, Nick G. for winning the auction bidding for me, and the folks at the Eastern California Museum for being such excellent caretakers of Salt Tram history. 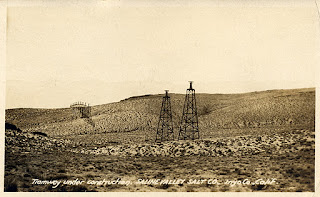 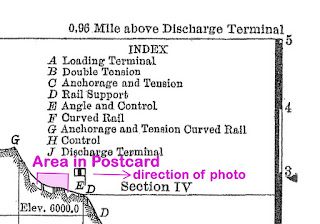 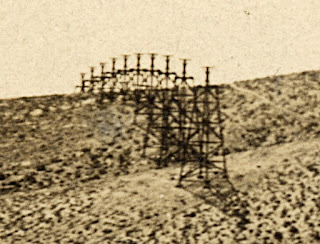 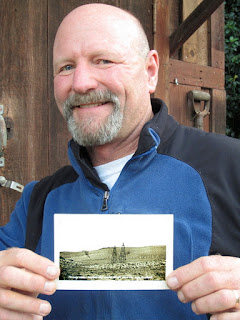 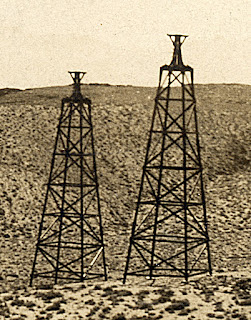 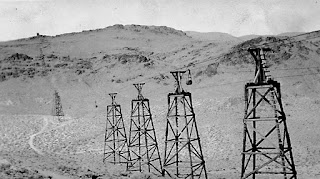