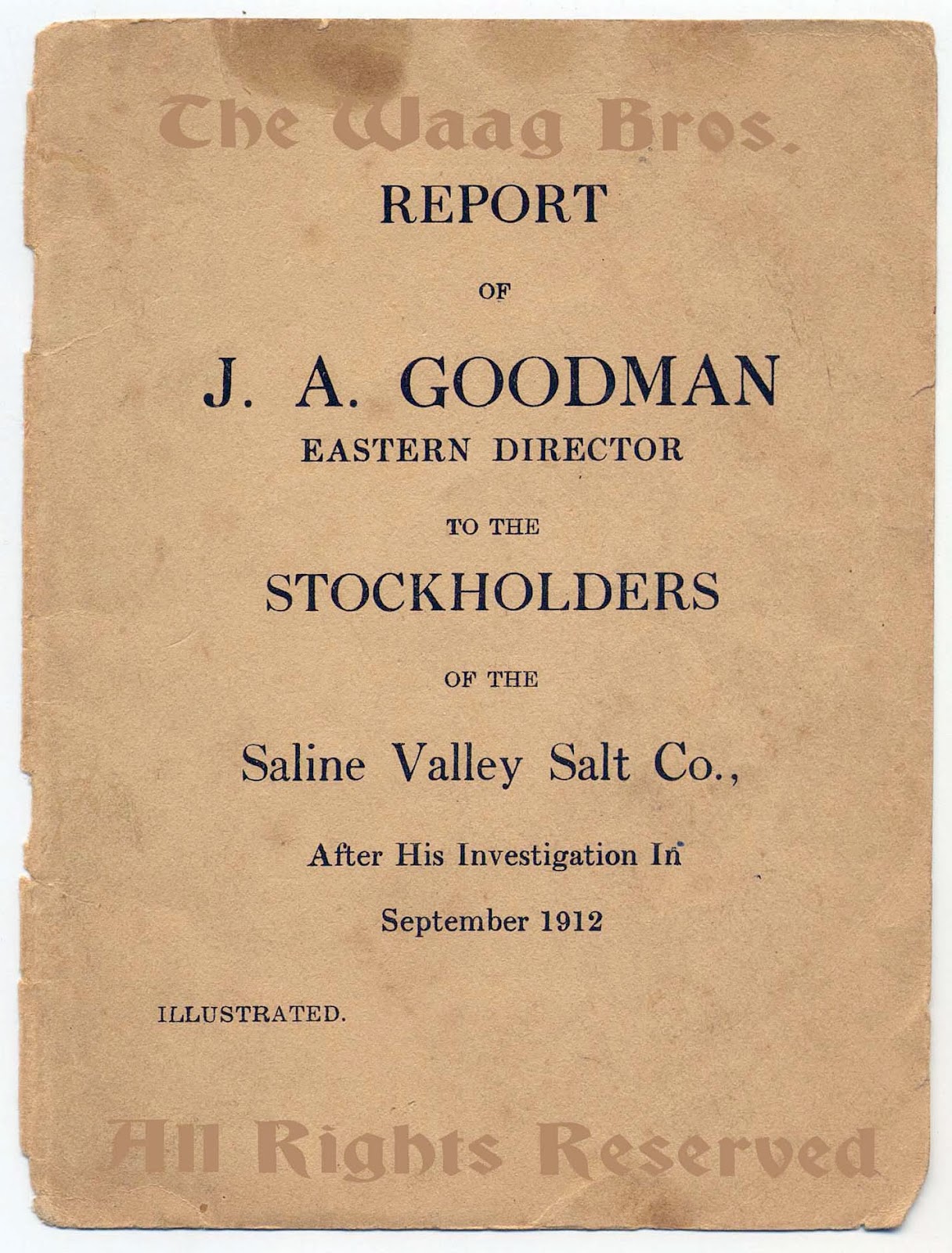 Document Title: Report of J. A. Goodman,  Eastern Director, to the Stockholders of the Saline Valley Salt Co., After His Investigation In September 1912 Illustrated. 28 page document (9 pages with text only, 8 pages with photo and caption only, 11 blank pages). Our copy is missing the back page (page 27 and 28), which we believe to blank, but we will never known unless another copy is unearthed. Most of the blank pages are blank because (with a few exceptions) they are located on the backside of a photo page which uses higher quality paper than the text pages.

By: J. A. Goodman, Eastern Director. Who is J. A. Goodman? Mr. Goodman played a prominent role in the management and promotion of the Salt Tram and is named in many documents. Here is what we know (by date):

Director: The June 23, 1911 edition of the Inyo Independent lists him as a "Director" of the Saline Valley Salt Co.

Document Photos: All 8 photos have photographer credits, as follows:
• J. A. Goodman: 6 photos (author of the report document).
• W. H. Leffingwell: 1 photo. Leffingwell was the American Society of Civil Engineering - Chief Engineer in 1917, Chief Engineer of the Mono Power Company in 1911, Sales Agent for Saline Valley Salt in 1910. Date of Leffingwell's photo is unknown, but likely prior to Sept. 1912. Indicates the photo is of the Salt Fields 6 miles away from an elevation of 6,000 feet. This 6,000 foot elevation corresponds with the elevation of Control Station 2 - so we assume this is where he took his photo.
• "Constructing Engineer": 1 photo. Note that this is the exact same photo that we bought as a postcard on eBay that was attributed to A. A. Forbes. It has the classic white text annotation which was generally written onto the negative of the photo, but no A. A. Forbes name on it. This leads us to believe that this photo was NOT taken by A. A. Forbes. Note that it also identifies the photo as having been taken "last summer" (which would be Summer 1911), and that "work has now been completed" [on the section of the tram line shown in the photo]. 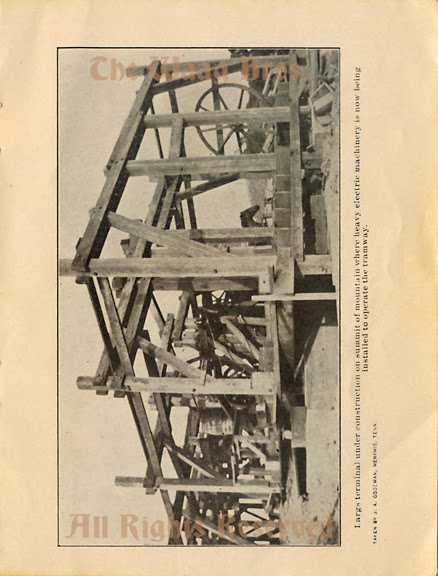 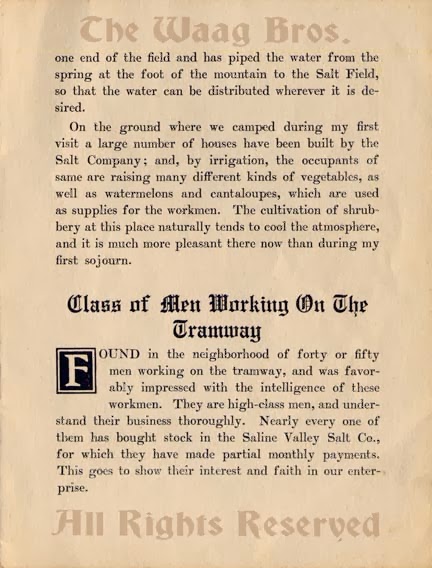 Source: Out of nowhere (in February 2014), Ms. C. C. of California (identity not disclosed; name - email - address are in the Salt Tram investigation database) sent me an email indicating that she had this document, and oh, would be be interested in getting our hands on it? Uh - hell, yeah! She described it, and I was pretty sure that we had seen this one before. But what the heck! Sure, we'd love to have it. We told her we would we scan it, then donate it to the Eastern California Museum. Well, we've scanned it, and next time we are in Indie, we will make the donation in C. C.'s name to the Museum. Here's the email correspondence with Ms. C. C.:


On Feb 12, 2014, at 9:32 AM, C. C. wrote: Good Day, I have just found an old Stockholders Report of the Saline Valley Salt Co. by J.A. Goodman, Eatern Director after his investigation in September 1912.  It has some illustrations.  The booklet's cover is not in the best of shape but the contents and photos are still good.  I was going through some of my grandfather's things and found this.  I didn't see a stockholder's certificate to go with it but hope to in the future. Would you like to have this article?

Synopsis of Document: Report author J. A. Goodman was definitely a "Salt Tram Man", and obviously, the primary purpose of this document was propaganda on the part of Saline Valley Salt Co. Management. Clearly, the Salt Tram construction was WAY behind schedule at this point, and somebody had to be a cheerleader for the stockholders to convince them to keep their shares. Management of the Salt Co. had a vested interest in keeping stock prices high, as they were all heavily invested stockholders in the venture.

Despite the progagandist nature of the document, it does yield significant value as research material. We assume, unless proven otherwise, that Mr. Goodman did indeed visit the Salt Tram with other stockholders, and was accompanied by White Smith in Sept. 1912. We also assume that the photos attributed to Mr. Goodman were taken on this same trip. Since we are able to identify all the locations shown in the photos, this gives us a snapshot into the progress of the Salt Tram up to that date. In addition, there are other significant Salt Tram dates and statements of fact that were heretofore unknown to us, thus making this contemporaneous report a valuable research asset.

Just one example of the Propaganda!: Around April 1910, the Saline Valley Salt Co. ran ads in numerous Owens Valley newspapers inviting residents to invest in the Salt Tram. These extensive ads went on to indicate that the ENTIRE tramway would be complete and operational by October 1910! Fast forward almost 2 YEARS later (Sept. 1912) and it's still not done. Doc-007 optimistically states on page 6 that "in my judgment, it [the Salt Tram] will be in full operation on or about January 15, 1913. The Salt Tram transported its first bucket of Salt from the Salt Lake to the Discharge Station on July 2, 1913 - 168 days or almost 6 months later than J. A. Goodman's estimate of January 15. So at the time of this report, Goodman was estimating that the Salt Tram would begin operation in 4 months, but it was actually almost 10 months before the first bucket of Salt was transported - a HUGE discrepancy, and just one more in a series of missed deadlines for building the tramway and associated facilities.

You can get your own personal copy of this Document: We are so impressed with the awesomeness of this 28-page document that we plan on printing it and making it available to our many Salt Tram followers. We plan to add explanatory annotations on all the blank pages of the document. We plan to sell it at our cost of $10 including shipping. At the same time, we plan on donating some of the copies to the Eastern California Museum so that they can sell them as a small fundraiser, which will generate some interest and funds for the "Friends of the Saline Valley Salt Tram" group. You can find out more about ordering this amazing document by clicking here.

Document Condition: This document arrived in "fair" condition, with a detached front cover, and missing page 27 and 28 (the back cover), which we believe to be blank. The internal pages are in good condition, though the 2 staple binding is rapidly failing.

Key Information: We have reviewed this document and have taken extensive notes regarding research questions, and what we have learned from it. We have added those notes to this booklet in the form of extensive annotations - you don't want to miss it!