Hydroelectric Power for Tram from Where?

Friends of the SALINE VALLEY SALT TRAM
www.SaltTram.blogspot.com   SalineValleySaltTram@gmail.com
Salt Tram history is rapidly disappearing, and we are striving to rediscover the efforts of our forefathers in order to give proper recognition to their hopes, dreams and abundant sweat from an era that is rapidly fading from our memories. We are actively seeking out information about the mining of Salt in Saline Valley between 1903 and the 1940's, including: documents, photos, articles, stories, artifacts, etc. If you can help us out, please email us at the address above - Thank-you! --Tim and Brian Waag, the Waag brothers (aka E. Clampus Waagus).
Caution (PLEASE READ): Climbing around on the tramway is dangerous because its really old and defnitely unsafe, so don't even think about it. Shoot, just getting to it requires some perilous hiking, and if you don't believe me, just take a look at the Zig Zag Access Trail (or what's left of it). Plus, climbing on it weakens it and endangers your life. Also, the Saline Valley Salt Tram is on the National Register of Historic Places and should be treated with the respect that it deserves. What little remains is of great historic value, and should not be disturbed in any way. Heck, its probably against the law to move parts of the tram around, and certainly a crime to take home some of the few bits of it that remain (though you'd have to ask your friendly local BLM agent for details). So please treat it with the respect it deserves, so that future generations can enjoy whats left, without you messing it up. Really. Please. You can see its listing on the National Register of Historic Places at these web links:
National Register of Historic Places 1          National Register of Historic Places 2

Page 727 (last paragraph of page):
The erection of the line was pushed energetically, and the tramway was ready for preliminary test on June 10th, [1913], but the electrical con-

Page 728 (first paragraph of page):
-nections from the power-house of the Los Angeles Aqueduct, which is in Cottonwood Canyon on the opposite side of Owens Lake, were not completed until later. The first bucket of salt arrived at the discharge terminal on July 2d, 1913, and was the occasion for a great demonstration. 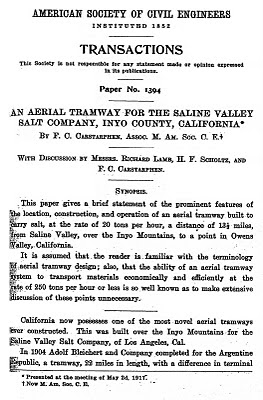 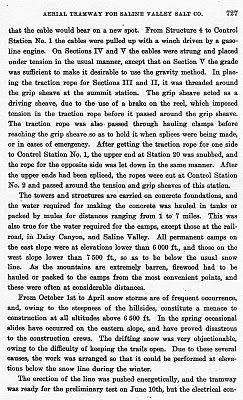 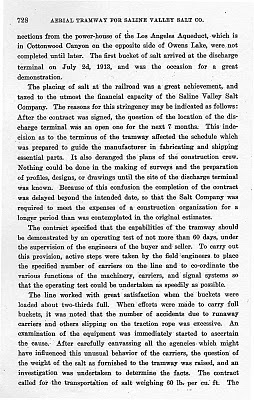 By 1906 The Four Metals Mining and Smelting Co. had constructed the five mile long (as the crow flys) Montgomery Tram. From the main mine, its terminus was just short of Keeler at a large company owned silver smelter. Engineering problems plagued the Montgomery. By 1913, electric transmission lines had been brought from Lone Pine creek, across the north end of the Owens Lake ("drying") to the Saline Valley Salt Tram, just north of Swansea. By 1916 the power lines had been extended to Cerro Gordo via Keeler. That year, on the same alignment as the Montgomery, the newly constructed Leschen Aerial Wire Rope (Electric) Tramway was put in service from Cerro Gordo. Its terminus was over a spur of the Carson and Colorado Narrow Guage R.R., where Cerro Gordo zinc was dumped into open cars and shipped to smelters clear into Kansas.

Here are some notes from Brian of Lone Pine:
Before the Los Angeles Aquaduct was built, Edison built a power line down the Owens Valley to Los Angeles (date?), with electricity generated from a Hydroelectric Power Plant in Bishop Creek (source: Edison’s Centennial Publication). The power line was to supply electricity to the mines, including another line built to Goldfield, Nevada. They also supplied electricity to Swansea, Keeler and Darwin (when?). Bill does not believe the Cottonwood Canyon supplied the Salt Tram with power because the Cottonwood plant electricity was used exclusively with supply power for the construction of the Aquaduct, since Edison (???) at that time was NOT in the power supply business until the first decades of the 20th century. Brian of Lone Pine states that the Salt Tram could have gotten power from a closer location (assumedly he is referring to Swansea), yet Swansea is getting its power from Edison, so it’s the same thing. Also, at that time, was the power company Southern Sierras Power Company (that supplied electricity to Cerro Gordo Mines and Tramway in 1916) or Edison? Bill and Brian will get out next week (week of 1/11/2010) to see if there is any evidence on the ground. Clearly, more work needs to be done here to solve this mystery.

Update from Brian of Lone Pine 1/14/2010:
Went snooping around with Bill on 1/12. Reviewed the Cottonwood Hydroelectric plant site [Tim: heard rumors that older turbine equipment was still onsite - hope to check that out someday]. There was a substation just before the Lone Pine Dump (see A. A. Forbes photo below). They report that nothing is left but a rectangular berm outline, located adjacent to the Southern Pacific row [row?]. At the Cottonwood Plant there is a power diagram showing a connection to the Line Pine Dump Substation, with no date but a reference number - will see if we can find more definitive information. Brian has a friend with the LADWP who will look into their archives, as well as those of S. C. Edison (suppliers of power to Keeler - today? or back in the Salt Tram days?). The service power line to Keeler and Darwin left the main Edison line south of the Lone Pine Dump Substation. The only pwer line heading east out of Cottonwood goes as far as the Southern Pacific Row (right of way?) and then turns north. Will keep you posted as we learn more. [Thanks Brian and Bill - many thanks to our men on the ground in Lone Pine!].

Found this photo (in the book: Images of America: Lone Pine, author: Christopher Langley, Copyright 2007, Published by Arcadia Publishing, page 80 - bottom), ironically enough, by A. A. Forbes. Believe it is the substation that Brian and Bill were alluding to in the previous paragraph? 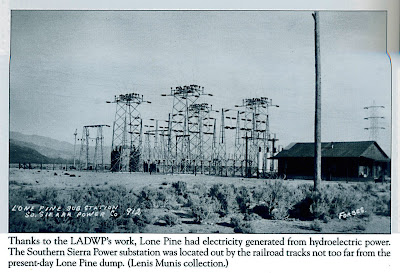 Here's what I found that might be useful in this initial quest for the Salt Tram electrical power source:

article 1 (9/23/1910):
TO HAVE ELECTRIC LIGHTS:
Within Forty Days Independence Will Have Streets
and Houses Lighted by Electricity
Feature length page 1 article with 4 paragraphs.
Summary: Discusses completion of lighting for the streets of Independence “with electricity to be furnished by the Los Angeles Aquaduct”. The city agreed to furnish and maintain 2 [wow!] lights, with the citizens in attendance willing to supply and maintain at least 10 more. The lights will be 32 candle power. For street lighting, the city will charge $10 a year for each light. Supervisors also agreed to pay for 2 more lights for the courthouse yard outside the jail. Independence citizens have already put up $500 to run power lines into town. “The power will come from both Division Creek and Cottonwood Creek”. Citizens were left to negotiate the running of power to their individual homes. [wow!].

article 2 (4/21/1911):
(Around Town)
Independence now has street lights.
"Main Street is now well lighted with electricity and reports state that in the near future that arc lights will be put on the back streets". [entire article, word for word]

Attached is a photo of what the Power Station at Control Station 2 looked like in its prime (photo is taken facing towards CS 2). Photo Courtesy of the Eastern California Museum. 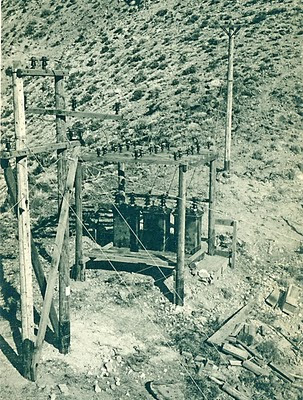 We are encouraging BLM to consider leading a partial stabilization of Control Station 2 (similar to what was done at the Summit Station, or Control Station 3), perhaps they could take the baby step of rebuilding the electrical substation (shown in the photo), which would require much less effort. I dug up a current photo of it - pretty much everything is still there! The first photo is a contemporary view of the power station at CS 2, along with a closeup of the transformers and insulators. We can provide the labor, tools, etc. if it ever gets that far. Kirk Halford managed to completely rebuild the Salt Tram Summit Caretaker's Cabin (a HUGE task), plus stabilize the Summit Control Station - both amazing accomplishments. Sadly, he is moving on, but we hope that the value of what is left of the Salt Tram is felt to be worth saving, by the powers that be.