A. A. Forbes: Salt Tram Photographer

Friends of the SALINE VALLEY SALT TRAM
www.SaltTram.blogspot.com   SalineValleySaltTram@gmail.com
Salt Tram history is rapidly disappearing, and we are striving to rediscover the efforts of our forefathers in order to give proper recognition to their hopes, dreams and abundant sweat from an era that is rapidly fading from our memories. We are actively seeking out information about the mining of Salt in Saline Valley between 1903 and the 1940's, including: documents, photos, articles, stories, artifacts, etc. If you can help us out, please email us at the address above - Thank-you! --Tim and Brian Waag, the Waag brothers (aka E. Clampus Waagus).
Caution (PLEASE READ): Climbing around on the tramway is dangerous because its really old and defnitely unsafe, so don't even think about it. Shoot, just getting to it requires some perilous hiking, and if you don't believe me, just take a look at the Zig Zag Access Trail (or what's left of it). Plus, climbing on it weakens it and endangers your life. Also, the Saline Valley Salt Tram is on the National Register of Historic Places and should be treated with the respect that it deserves. What little remains is of great historic value, and should not be disturbed in any way. Heck, its probably against the law to move parts of the tram around, and certainly a crime to take home some of the few bits of it that remain (though you'd have to ask your friendly local BLM agent for details). So please treat it with the respect it deserves, so that future generations can enjoy whats left, without you messing it up. Really. Please. You can see its listing on the National Register of Historic Places at these web links:
National Register of Historic Places 1          National Register of Historic Places 2
*****************************************************************************************
QUESTION 1 (you, the internet reader): We are seeking additional photos by A. A. Forbes related to the Salt Tram. A. A. Forbes operated his studio in Bishop from 1902 to 1916, the same timeframe in which the Salt Tram was conceived, designed, built and operated. In addition, the Salt Tram innovator and President, White Smith, Esq. (that means he was a lawyer) was a prominent citizen of the same Bishop, California in which Mr. Forbes had his studio. Both A. A. Forbes and White Smith advertised their respective businesses (Photography Studio and Law Office) on the same page in the Inyo Register for numerous years and must have been acquainted; we hope that White and family and friends sat for a portrailt with A. A., and we hope you have a copy of it - we'd love to see it!
QUESTION 2 (BRIAN): A. A. Forbes has a large collection of his photos (from exquisite and detailed 8" x 10" negatives) in the Los Angeles County Museum of Natural History. At the museum's website,

is located the "Illustrated Catalog of Forbes Studio, Bishop, Inyo County, California", with the catalog published around 1912 to 1914 containing his works from the studio between 1902 and 1914. Brian, get on it - find that collection, and see if any more Salt Tram-related photos are in it! 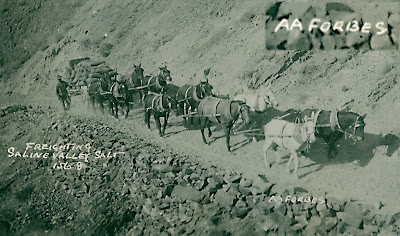 Photo 2: Andrew A. Forbes (The Journal of California Anthropology, Summer 1975, Page 39, photo attributed in publication to J. McLaren Forbes - son of A. A. Forbes) 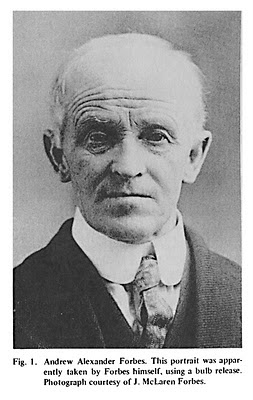 Long before beginning our Salt Tram research project, I was vaguely familiar with the works of Owens Valley photographer A. A. Forbes. So it was without surprise that a good number of his photographs documented the Saline Valley Salt Tram. It was time to dig a little deeper into the life and career of A. A. Forbes, but this time, Google was of little help - just not a lot of hits on good old "A. A." However, there was one little spark of a lead - and I followed it. In "The Journal of California Anthropology (Summer 1975)" was an article written by Jon Bosak ("Photography Editor"). Google included a description that indicated that this article contained the only known biography of A. A. Forbes. I got very excited at reading this, and tracked down a copy of the journal, which is now in my posession. It contains an 11 paragraph biography of A. A. Forbes, which I will summarize below. Note the the article states that in the Los Angeles County Museum of Natural History www.nhm.org/site is located the "Illustrated Catalog of Forbes Studio, Bishop, Inyo County, California", published around 1912 to 1914.
*****************************************************************************************
Summary of Article:
The Journal of California Anthropology (Summer 1975)
Andrew A. Forbes - Photographs of the Owens Valley Paiute
Jon Bosak, Photography Editor
The purpose of this article was for Jon Bosak to present 16 previously unpublished photos of the Owens Valley Paiute indian, take by Bishop, California photographer Andrew Alexander Forbes. With rare exceptions, the author claims that A. A. Forbes photos from his "Forbes Studio Collection" have never been published. Bosak also attributes more than 1200 negatives "of all types of subjects" in the Forbes collection at the LA museum. Barring the purposeful distortion of facts taken on by photographers of Forbes day, the photos are seen as primary research tools reflecting facts on the ground about the way of life of his subjects, which Bosak believes to be primarily native Americans.
Bosak goes on to state that "little is known about the man who crafted these images beyond the facts set forth [here]". This short biography was written by Forbes wife, and added to later by other members of the Forbes family, including his son, J. McLaren Forbes of Reno, Nevada.

*****************************************************************************************
A. A. Forbes Biographical Timeline:
• April 21, 1862 - A. A. Forbes ("Andy" to his friends) was born in Wisconsin.
• 1867 - family traveled from Wisconsin to California via the Isthmus of Panama, then returned to Iowa in 1878.
• 1878 - moved to Kansas, working as stockmen until the blizzards, combined with grasshopper hordes, destroy feed between 1888 and 1890, forcing them to move on.
• 1890 - moved to southern California (Riverside, then Santa Ana).
• 1878 - 1888 - somewhere in this timeframe, while working with his family as a cowboy, A. A. took up photography. Little is known of his training in this art.
• April 22, 1889 - took historical photos of the "Opening Run" event where 20,000 homesteaders races across the Oklahoma border into "Indian Territory" in a wild dash for free land. These Opening Run photos are now at the University of Oklahoma, and marked a turn in his career. He would be a professional photographer from then on.
• 1890 - Itinerant photographer, traveling from town to town by wagon team, moving westward, stopping in small towns to take photos of locals and "points of interest" until he saved enough money to move on.
• 1898 - Forbes arrived in California, having gathered a remarkable collection of Indian photos from those itinerant years. Forbes first made studio headquarters in Santa Ana with his family.
• 1902 - Moved his studio to Bishop California, though the date is not clear, the move was certainly made between 1900 and 1904. The classic "Forbes Studio" was set up in Bishop, where he married businesswoman Rozette Prutzman, who managed the studio, and had one son with him, J. McLaren Forbes. During the 14 years Forbes operated the studio, he became friends with the Indians of the area, hanging out with them, and often taken portraits of their families, thus creating a bond of trust between them. The financial mainstay of his studio, was "sale to tourists of Forbes' scenic views of Owens Valley" and the surrounds, including the Sierras, Yosemite and the San Joaquin Valley.
• 1916 - Forbes closed the studio for health reasons and moved to southern California, where he was unable to open up a new studio.
• 1921 - Forbes passed away, well-remembered as a friendly and well-liked man, active in the Odd Fellows lodge, community and church groups, and local plays.
*****************************************************************************************
A few more notes about Forbes, the photographer:
Though we have only 1 photo by Forbes in our historical Salt Tram photo collection, we believe that there may have been many more. In fact, my recollection is that while looking through the large Eastern California Museum collection of Salt Tram photos, we encountered others, particularly in post card form, though my recollection may be hazy. At that time, I was not particularly cognizant of A. A Forbes and his local photography contributions, so was not on the lookout for his work - but now I am.

UPDATE: 3/27/2010 Brian called the Los Angeles County Natural History Museum, and they indicated that they had photos of the Saline Valley Salt Tram in the Forbes collection at the museum, but NOBODY can scan or use them in ANY publication, EVER - all you can do is photocopy them. I find that hard to believe,  as the article above (The Journal of California Anthropology (Summer 1975), Andrew A. Forbes - Photographs of the Owens Valley Paiute, Jon Bosak, Photography Editor) has many photos from that collection printed at 8.5" x 11" (and NOT from a photocopy). We'll have to look into this more - perhaps have some of our "partners" make the phone call! :-)
Forbes photos posess high technical quality, due primarily to the massive 8 inch x 10 inch size of the negatives, along with the required long exposures times, which captured incredible detail. Forbes also possessed a seriousness of purpose in his photography, which allowed him to doggedly pursue difficult subjects to bag a successful photo, which we hope to find that he applied to Salt Tram subjects.
His scenic panoramas were in themselves a technical marvel, since the elongated photos required special techniques. In the ECM Salt Tram photo collection are several very large panoramas, which may have been captured by Forbes - we'll have to wait and see. One view taken with his "Circuit" camera captured a 250 mile wide window of the Sierra Nevadas in 13 sections, with the print measuring an incredible 10 inches by 32 FEET! Bosak notes that it is a sad fact that with the superior lenses of today, the film and digital technology is so inferior that detailed, high quality images of the Forbes era are seldom being captured by modern day anthropologists in the field.
*****************************************************************************************
Book: Images of America: Lone Pine
by Christopher Langley
Arcadia Publishing, Copyright 2007