Salt Lake with No Name?

Friends of the SALINE VALLEY SALT TRAM
SaltTram.blogspot.com   SalineValleySaltTram@gmail.com
Salt Tram history is rapidly disappearing, and we are striving to rediscover the efforts of our forefathers in order to give proper recognition to their hopes, dreams and abundant sweat from an era that is rapidly fading from our memories. We are actively seeking out information about the mining of Salt in Saline Valley between 1903 and the 1940's, including: documents, photos, articles, stories, artifacts, etc. If you can help us out, please email us at the address above - Thank-you! --Tim and Brian Waag, the Waag brothers (aka E. Clampus Waagus).
Caution (PLEASE READ): Climbing around on the tramway is dangerous because its really old and defnitely unsafe, so don't even think about it. Shoot, just getting to it requires some perilous hiking, and if you don't believe me, just take a look at the Zig Zag Access Trail (or what's left of it). Plus, climbing on it weakens it and endangers your life. Also, the Saline Valley Salt Tram is on the National Register of Historic Places and should be treated with the respect that it deserves. What little remains is of great historic value, and should not be disturbed in any way. Heck, its probably against the law to move parts of the tram around, and certainly a crime to take home some of the few bits of it that remain (though you'd have to ask your friendly local BLM agent for details). So please treat it with the respect it deserves, so that future generations can enjoy whats left, without you messing it up. Really. Please. You can see its listing on the National Register of Historic Places at these web links:
http://www.nationalregisterofhistoricplaces.com/ca/Inyo/state.html
http://www.noehill.com/inyo/nat1974000514.asp
*****************************************************************************************
QUESTION 1: What would it take to give the salt-filled expanse in Saline Valley a real name (it certainly deserves one)? The topo and other maps just say "Salt Lake" (see below - click to enlarge). 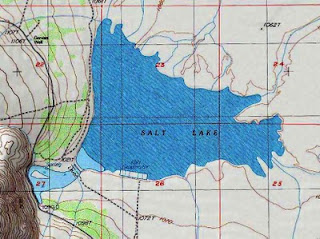 Greg Haverstock of Bishop BLM kindly informed me that naming geological formations and structures is done under the auspices of the U.S. Board on Geographic Names, and that more information can be found at (click on link): How to Name Stuff

Key information from the link above are these 2 (somewhat conflicting in the case of the Salt Lake) paragraphs:

1. Present Day Local Usage: One of the long-standing principles of the BGN is recognition of present-day local usage. And, as in the above case, local usage may change. The Cascade Dam was built by the Bureau of Reclamation in 1948; early maps labeled the reservoir the "Cascade Dam Reservoir." But by the mid-1950s, the name "Cascade Reservoir" had come into common use. Forty years later, with the renaming of an area park Lake Cascade State Park, local usage has evolved so that the name "Lake Cascade" now makes more sense. The Domestic Names Committee agreed and voted to approve the change. Tim's comment: In the case of the Salt Lake, I'm not sure what anybody actually calls it, if they do at all; I have heard it called "The Saline Lake" by some folks in our group, however.

2. Naming After Long Deceased Individuals who were Long Associated with the Feature: Four other cases on the docket illustrated another board principle: naming previously unnamed domestic geographic features after deceased individuals long associated with the site, when such names are recommended by local authorities. Thus the committee approved the naming of a lagoon and a bay in Kachemak Bay State Park in Alaska after two individuals who had long lived in the area. In both cases, the recommendation was originally made by a local citizen, the state park agreed and the Alaska State Board on Geographic Names concurred. And two previously unnamed features in Florida are now officially known as "Barley Basin" and "Shands Key" as a result of the committee's action in June. Tim's Comment: This is a more fitting category for the possible naming of the Salt Lake.


Other information from the link: The 600th meeting of the Domestic Names Committee of the U.S. Board on Geographic Names took place in the summer of 2009. Created in 1947, when the Board on Geographic Names was reorganized, the committee meets monthly and is responsible for standardizing the names of places, features and areas within the 50 states and in other areas under the sovereignty of the United States. The systematic standardization of geographic names in the United States began late in the 19th century. With the surge of mapping and scientific reporting associated with the exploration, mining and settlement of the Western territories following the Civil War, it became clear that mapmakers and scientists needed to have a uniform, nonconflicting geographical nomenclature in place to avoid confusion among places and names.

click to go to SALT TRAM HOME
Posted by Tim Waag at 10:32 AM