QUESTION 2: Check with the Eastern California Museum (Lone Pine, Calif.) to see how many Salt Tram Buckets/Carriers and/or Hangers are in their historical artifact yard; I believe that it is either 4 or 5 buckets withOUT hangers.

QUESTION 3: Note also that the buckets were stenciled with a number on the side, like this historical photo indicates (photo Courtesy Eastern California Museum). It remains to be seen whether the stenciled number (in paint) matches the number stamped on the hanger. We did find 1 bucket that had the original number painted on it (bucket number 109), but we haven't checked for a match with the stamped number on the hanger (yet). 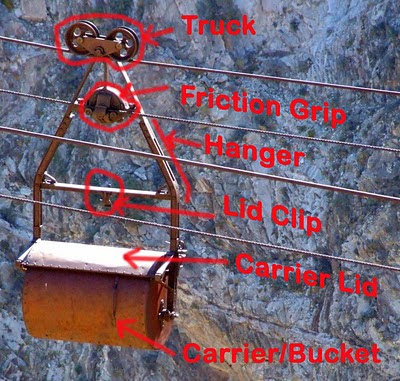 Also, there's a little oval "medallion" that was originally issued on all carriers, that is a popular item for vandals, which explains why so many are missing. Its one thing to steal an 800 pound Salt Tram Carrier, and another thing to remove the "Manufactured by Trenton Iron Co., Trenton New Jersey" medallion. I don't know what they are called, so I'm calling them a "medallion" for now (don't have time to look it up, but I will). Here's what it looks like: 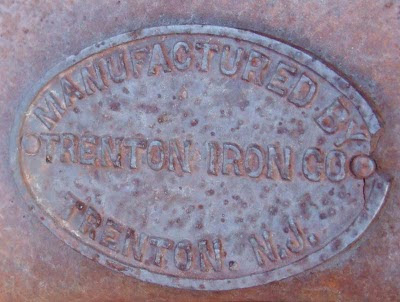 If you want to see where the medallion is located on the bucket, here's a good example of a carrier "medallion" that hasn't been vandalized yet, due to its awkward location! 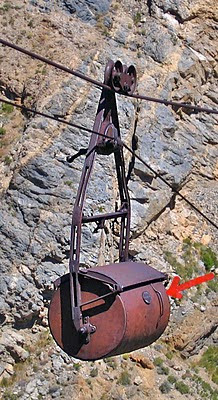 The original "Friction Grips" on the Salt Tram Carriers were designed to hold an 800 pound bucket filled with 600  pounds of "dry" salt. They wished. Unforunately, most salt transported was of the "wet" variety weighing in at around 50% heavier when laced with water. The original grips did not hold, even though they were specially designed for the Salt Tram and its "extreme" gradients. Sadly, it took 2 years to adequately solve the problem. The new grips were also a new design, of the "Universal Wico" design. Fortunately, we have the May 1917 ASCE article to document these troubles. Having now reviewed the Inyo Register from 1910 to 1913, it remains silent as to the details of the tram problems. It only hints at the problems by indicating at the end of July, 1913, that the tram line was running, but with the buckets only "half full". Here are some excerpts from that ASCE document that explains the scenario (click to enlarge): 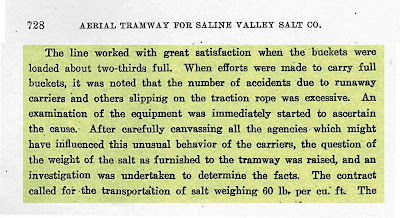 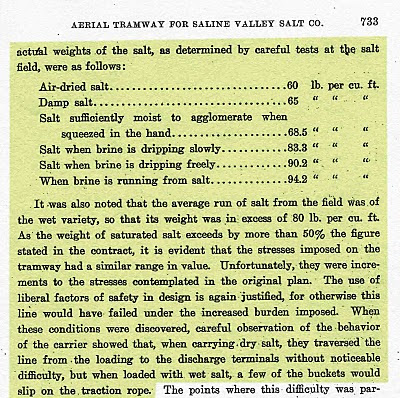 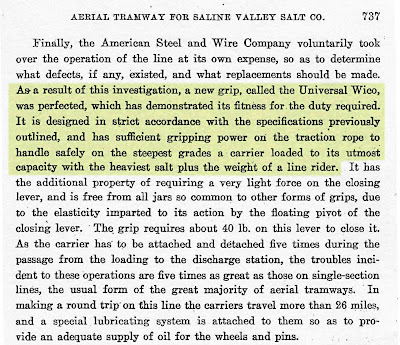 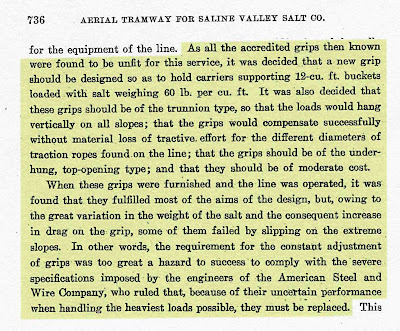 We are in search of both the "original" grip, and the replacement "Universal Wico" grip. We have seen many examples of the Wico grip, as that is what is on the buckets out on the line (still) today. Harder to find is an example of the "original" grip, as we don't know what they look like - however, they probably don't say "Wico" on them like the replacements do (see photo below). It is likely that the old grips are out there in the field somewhere, as we know from the Patterson Diary that many buckets fell off the line, often from great heights. It is that great height that caused them to crush upon impact, (assumedly) to be left where they fell. We need to find where they fell, and see if we can photograph the original grip.

One clue that the bucket is original is the existence of bullet holes in the bottom of the carrier. In order to facilitate draining of liquid from the wet salt, one or more holes were created in the bottom of the buckets, apparently from the dishcarge of a 45 caliber hand gun. Buckets with the "original" grips probably don't have the bullet holes in them. Here is the replacement "Universal Wico" grip: 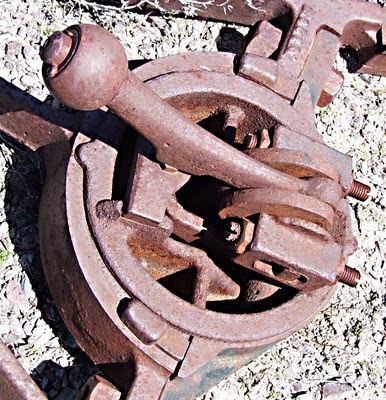 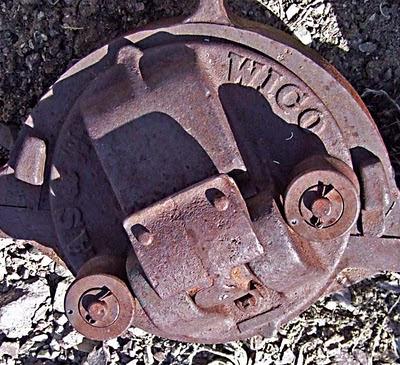 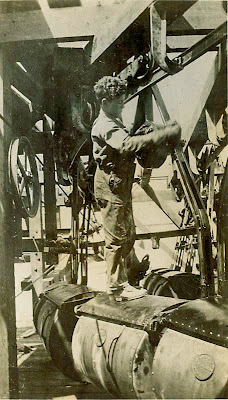 Note also that the buckets were stenciled with a painted number on the side. It remains to be seen whether the stenciled number (in paint) matches the number stamped on the hanger. We did find one bucket that had the original number painted on it (bucket number 109), but we haven't checked for a match with the stamped number on it's hanger (yet). Bucket number 47 on the line near the Discharge Station (near Swansea). Historical photo (below) Courtesy Eastern Sierra Museum (click to enlarge). 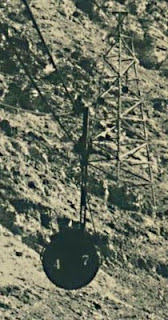 Update: April, 2010:
A friend recently trekked out to Saline Valley, and found this bucket,  only the second carrier that has been found with the number still stenciled on it. Ironically, it appears that it MAY be the bucket that is shown in the photo above, though our friend bets that the bucket below is numbered 17, and not 47. Pretty cool find!

Wide angle view of the bucket: 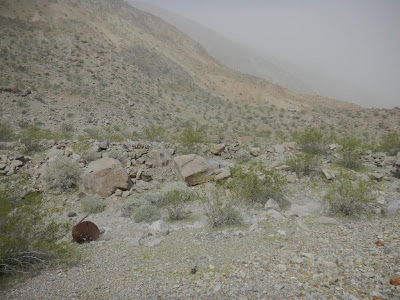 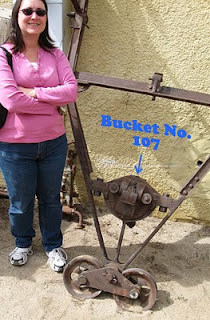 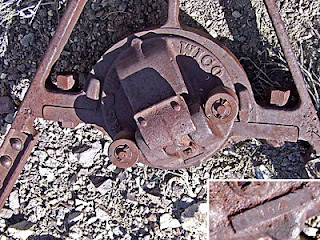 Bucket Parts Location - What's There?
• Eastern California Museum (Lone Pine, Calif.) - 4 or 5 buckets withOUT hangers (I'll have to check on this one for sure)
• Maturango Museum yard (Ridgecrest, Calif.) - 1 bucket/carrier with no hanger (need to get a photo of this one)

Below is a piece of a hanger that is misshapen (perhaps from impact with the ground from falling off the tramway?), and an example of the type of bucket parts that are tracked in this section. It is approximately located below (west) of Control Station 4. 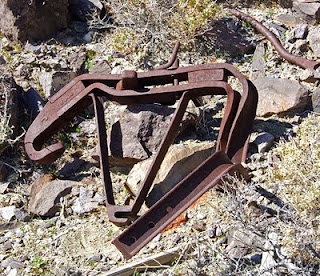