Friends of the SALINE VALLEY SALT TRAM
SaltTram.blogspot.com   SalineValleySaltTram@gmail.com
Salt Tram history is rapidly disappearing, and we are striving to rediscover the efforts of our forefathers in order to give proper recognition to their hopes, dreams and abundant sweat from an era that is rapidly fading from our memories. We are actively seeking out information about the mining of Salt in Saline Valley between 1903 and the 1940's, including: documents, photos, articles, stories, artifacts, etc. If you can help us out, please email us at the address above - Thank-you! --Tim and Brian Waag, the Waag brothers (aka E. Clampus Waagus).
Caution (PLEASE READ): Climbing around on the tramway is dangerous because its really old and defnitely unsafe, so don't even think about it. Shoot, just getting to it requires some perilous hiking, and if you don't believe me, just take a look at the Zig Zag Access Trail (or what's left of it). Plus, climbing on it weakens it and endangers your life. Also, the Saline Valley Salt Tram is on the National Register of Historic Places and should be treated with the respect that it deserves. What little remains is of great historic value, and should not be disturbed in any way. Heck, its probably against the law to move parts of the tram around, and certainly a crime to take home some of the few bits of it that remain (though you'd have to ask your friendly local BLM agent for details). So please treat it with the respect it deserves, so that future generations can enjoy whats left, without you messing it up. Really. Please. You can see its listing on the National Register of Historic Places at these web links:
http://www.nationalregisterofhistoricplaces.com/ca/Inyo/state.html
http://www.noehill.com/inyo/nat1974000514.asp
*****************************************************************************************
QUESTION 1: Find the reference in the periodical that indicates that Saline Valley Salt Tram representatives were traveling to Utah to examine Trenton Iron Company tramways, that were likely to be most similar to the Salt Tram, as the tramways are described as being built in mountainous terrain.  DONE (see below).

QUESTION 2: Collect historical information on the Utah tramways built by Trenton Iron Company that were most likely to be the ones visited and reviewed by Saline Valley Salt Tram representatives; check and see if these 2 tramways appear in Dr. Trennert's tramway book! Done! (see below).

QUESTION 3: Investigate the Dayton, Nevada tramway that is referenced in the Inyo Register's February 9, 1911 article below. Dr. Trennert, maybe you could help us out on this one?

QUESTION 4: If the Bingham, Utah tramway buckets carried more weight than the Salt Tram (1,220 pounds of ore per bucket vs. 600 for the Salt Tram), and carried it over steeper terrain, then how come the friction grips on the Utah tram held the load, and those on the Salt Tram did not? Remember that when the Salt Tram grips failed, it took TWO FULL YEARS to design a NEW GRIP that would work? Why not use the grips that the Trenton Iron Co. used on the Bingham tramway instead?????

In Dr. Robert Trennert's famous tramway book, "Riding the High Wire: Aerial Mine Tramways in the West", page 74, (University Press of Colorado, Copyright 2001), he discusses tramways in Utah that were built by Trenton Iron Co. A few quotes from his book (highly recommended, by the way!):

Aerial tramways were not nearly as numerous in Utah, although several notable examples were built...Between 1898 and 1910 [dates contemporaneous to the Salt Trams inception and design evaluation], the Trenton Iron Company built 4 different tramways to move copper ores from the various mines to local smelters. As would be amply demonstrated with these applications, in mountainous country [like where the Salt Tram was built], tramways would prove more economical than surface rail lines [i.e., railroads] which "could only be built along a circuitous route, involving great expense for grading and trestlework."

Here is a photo from a trip we took with Lewis and Mike to Westside Lumber in May 2009. The timbering operation used 3 major trestles for its trains to cross the canyon (and creek) watersheds, which are nowhere near as large or as deep as those of Daisy Canyon and the Inyos: 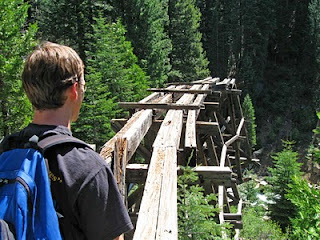 Bingham, Utah Tramway: According to Dr. Trennert's book, on page 75, "the Bingham Canyon tramway [was the one that] attracted the most attention ... the 1910 line that replaced the original Highland Boy tramway. This mammoth system ran from the Utah Consolidated Mining Company's Highland Boy Mine to the new ... Smelting and Refining ... plant at Tooele, a distance of over 4 miles. Because of its great length, the line was divided into 3 sections [The Saline Valley Salt Tram was divided into 5 sections]. Altogether, the tram system required 80 substantial wooden towers set on concrete piers, 2 control stations, 6 tension stations, and one rail station...Each control station housed a 100 horsepower GE induction motor for starting the line in motion."

Obviously, the Bingham Canyon tramway has much complexity in common with the Saline Valley Salt Tram, and was built in 1910, probably representing Trention Iron Company's state-of-the-art in tramway construction, and would be the best candidate for Saline Valley Salt Tram folks to travel to Utah and take a look at its impressive mountainous operations.

In regard to the above article, I really liked the little drawing in Chalfant's fine little newspaper of how the tramway stations work. That is, it gives a little insight into how the track cable (or carrying cable) is not a continuous loop cable, and is broken up into many segments, even into segments of different size wire rope! Here's a blow-up of that simple but effective graphic from above (click to enlarge):

W. H. Leffingwell, E. E. Smith (Eugene Smith - White Smith's brother), and N. J. Cooley (incorrectly spelled "Cooely" in the article above) returned from inspecting tramays in Dayton, Nevada and Bingham, Utah. The Utah tram served the Utah Consolidated Mine, which used a tram to transport ore from the mine to the smelter, and was the most like the tramway to be built to transport Salt out of Saline Valley. The Utah tram carried buckets up 1,450 feet of elevation gain in a mere 4,400 feet of length, then upon passing the high point, dropped the buckets 2,700 feet to the smelter at Tooele. This tramway had buckets that carried 1,220 pounds of ore at 3 buckets per minute, while the Salt Tram would only be carrying 600 pounds of salt (not 700 like the article above states), with 1 bucket arriving approximately every minute.

Bingham, Utah Tramway: Since we (correctly) guessed that our Salt Tram schemers visited the Bingham Tramway (as it most resembled what the Salt Tram would be built to tackle), the Bingham tram is described above (from our first post where I guessed correctly). Thanks, Dr. Trennert, for including this tram in your book - to make our job a little easier (maybe you could research the Dayton, Nevada Tramway below - the one where information is scarce?).

Dayton, Nevada Tramway (junk I found on the internet that might be the tramway that is referred to in the article above; there's not much info on the internet about this tram, and even the Inyo Register doesn't talk about it in their article above - only the Bingham, Utah tram): Dayton State Park is located along U.S. Highway 50; 12 miles east of Carson City on what used to be the north edge of Dayton, Nevada. The edge of the Town of Dayton has extended significantly to the north and east. The Park’s 152 acres covers the SE ¼ of Section 14, T16N, R21E along the base of Flowery Ridge. Elevations range from 4323 feet at the Carson River to 4547 feet on the higher areas above the Rock Point Mill Site. The Rock Point mill was often forced into durations of inactivity due to the character of the mining industry. In 1893, the C&C RR removed its spur track. In 1898, Herman Davis of Dayton bought the mill and operated it as the Nevada Reduction Works. Davis’ Mill worked nearly all of the tailings in the vicinity. In the early 1900’s, some of the first ore from the new camp at Tonopah was processed through the mill and reworked in the leaching plant for their remaining values. The reduction works burned down on May 3, 1909. The Lyon County sheriff temporarily took ownership, and in 1912, Mr. Hotaling bought and rebuilt the plant as a 40 stamp mill known as the Nevada Mining, Reduction and Power Company. In addition to necessary buildings, the mill operated an aerial tramway to transport ore for the Hayward Mine in Silver City. A tram has been built to the Hayward mine in Silver City five miles distant. This is the third reincarnation of the Rock Point Mill on the original site of 1861. Unfortunately, Capt. Davis severed his connection with the company in 1910 and removed to Reno. He is a live, progressive man and to him Dayton owes much of its business prosperity for the last twenty years.

About the cast of characters that investigated the tramways in Dayton, Nevada and Bingham, Utah: