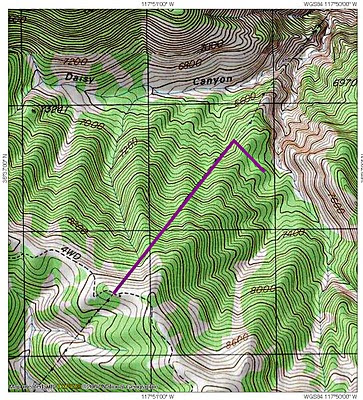 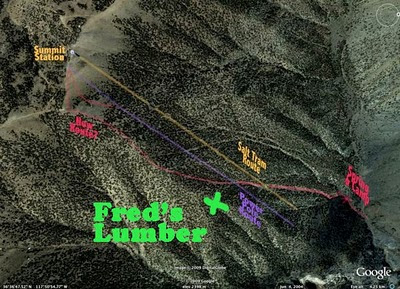 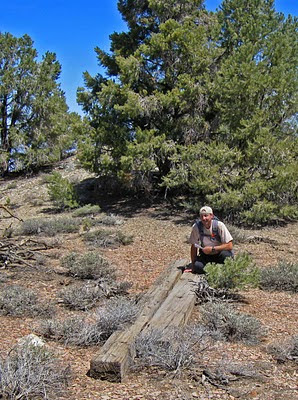 Note that they only found 2 6x10 beams that are about 20 feet long. This contrasts with Fred's vague recollections about the woodpile consisting of similar sized pieces of dimensional lumber, but many more than just the 2 beams that Brian and Alan found. Fred describes seeing a "wood pile" consisting of 20 foot beams from 8 to 20 in number, in a 3 to 7 foot high stack. Note however that the individual pieces of lumber are consist between Brian and Alan's pile, and the one observed by Fred. To me, this indicate that both wood piles are on the same "Go-Devil" track.

Brian and Alan were also trying to match terrain to this Go-Devil photo. Notice how similar Brian's photo in the background is similar to the trees in this historical photo (historical photo courtesy Eastern California Museum, Independence, Calif.), though they are clearly NOT the same EXACT location. Our experience has been that you can still match Pinion Pine trees from 100 years ago to the exact same trees today, so we are still optimistic about finding the site of the historical photo. Brian indicated that the snow drifts were a major impediment to matching the historical photo to a site on the ground. 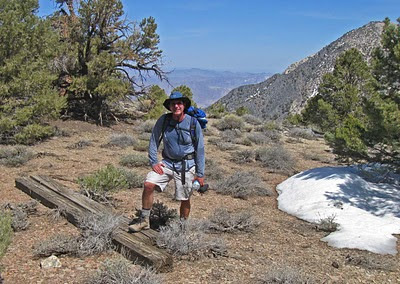 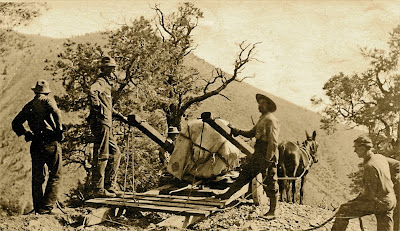 Alan and Brian found sections near the top of the ridge that appeared that they could have been part of the Go-Devil route, such as the one shown below (click to enlarge). These cleared areas only contained small pine trees that are likely to have been less than 100 years old, and thus NOT an impediment to the Go-Devil at the time of Salt Tram construction. 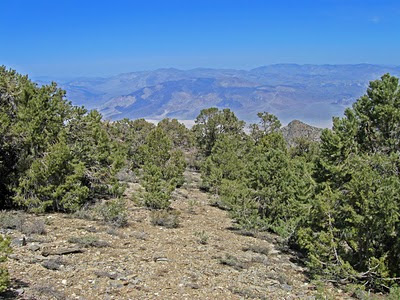 Brian and Alan also found numerous Pinion Pine stumps (see below), but in no discernable pattern to indicate a Go-Devil route. It appears that they were cut down either for Salt Tram firewood, or were stumps from the earlier days of the "Old Charcoal Road" and the quest for charcoal to feed the silver smelters at Cerro Gordo, just 7 miles down the summit road from the Salt Tram. Note all the snow in the background, still clinging to the north-facing slopes. 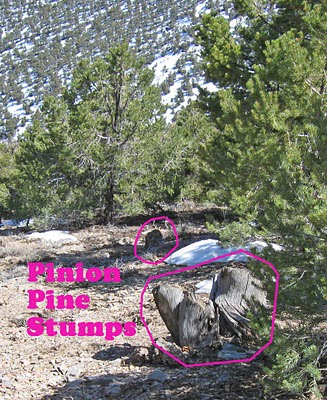