QUESTION2: Did Horace M. Albright, second director of the National Park Service (starting in 1929) work at the Salt Tram (at the age of 22) or even visit the tramway, or was it his father and miner George Albright? I've heard rumors that Horace worked on the Salt Tram, but have not been able to substantiate that one yet.

Horace was definitely born in Bishop, and his Dad, George Albright appears prominently as a leading citizen there, as described in the Inyo Register during the Salt Tram years. The Horace A. autobiography has a chapter on page 3 entitled "Boyhood Days in the Owens Valley 1890-1908" which definitely indicates that Horace (quote from the book) "finished high school in Bishop in 1908, and ... I always remembered that last lovely days as a resident of Bishop, Inyo County, California ... I never came home [to Bishop] again ... except as a visitor". To me, that indicates that Horace never worked at the Salt Tram, yet the Cliff Patterson diary mentions an "Albright" that visited him, so I need to find that in the Patterson diary. In all liklihood, the "Albright" referenced in the Salt Tram diary was Horace's Dad George. 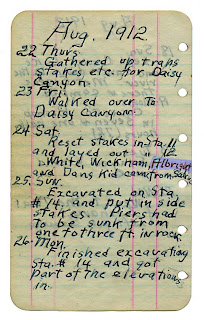 I highlighted the word Albright in purple to make it easier to find.

The transcription of the Saturday, August 24, 1912 diary entry is as follows:

"Albright" could be George Albright, Bishop miner and father of Horace Albright, or it could be Horace himself, home for the summer after graduating from UC Berkeley in June of 1912?

"Dan's kid" could be the son of Kuhnle, Daniel – Superintendent of the Saline Valley Salt Company (Doc02: ASCE 1917), the only Dan or Daniel listed in my Salt Tram people names database (the database is soon to be expanded, however).

An interesting note in this diary entry is that the group of White - Wickham - Albright - Dan's kid all came up from Saline Valley to where Clifford Patterson was working at Station 11 and Station 12, which are located just down from Control Station 2 on the east side of the tram, along what we call the Escape Trail! Anyways, its quite a journey from Saline Valley to Station 11 and 12 (trust me on this one) - it would take a determined and strong hiker one extra long day to get from Saline to Station 11 and 12, especially in late August, when its about 115 degrees down in the bottom of Saline Valley! I assume they either rode burros or horses to get from Saline to the Stations, though it would be a tough trip for the pack animals as well. Wonder where they spent the night? The 3 tent cabins at Control Station 2 may not have been there at that time, although we have found 3 other Salt Tram camp sites in the vicinity of Control Station 2. Remember, the Salt Tram would not be completed and start running for another year after this diary entry.

Wanna see what Station 11 and 12 look like? Here they are (I love Salt Tram photos):

Station 11 (click to enlarge); This station is what is called a "breakover" station, and was located as the first Station on the North side of Daisy Canyon, where the tram crosses the 1,000 foot deep chasm, so wonder that it is in the pitiful broken down shape that you see in the photo: 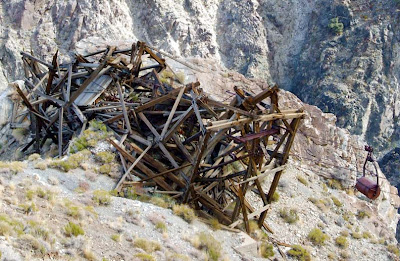 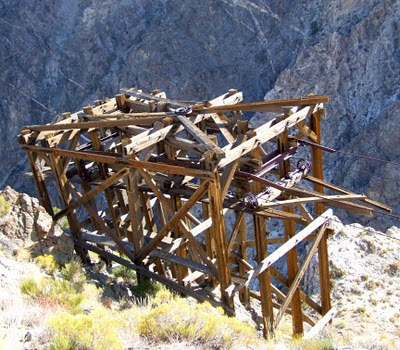 Great view from Station 11 of the Zig Zag Trail - contemporary photo with trail in pink; note that the trail NO LONGER EXISTS and that there is nothing but a STEEP, DANGEROUS, CLIFF-LIKE CHUTE; the pink line was drawn in photoshop to show where the trail was once located back in the 1920's before rock slides eliminated almost all traces of it! Can you spot tram Station 10 in the photo? (click to enlarge): 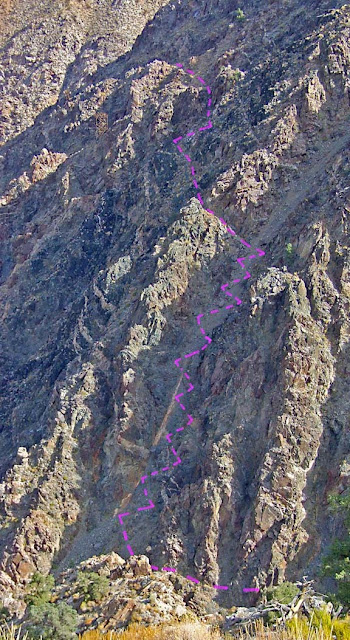 He left Bishop in 1908 for the University of California, Berkeley, and graduated from there in 1912 , later earning his law degree from Georgetown University. Albright married his college classmate Grace Noble and they had two children.

On January 12, 1929 Albright succeeded Mather as the second director of the NPS and held the post until August 9, 1933. In 1933 Albright resigned to work for the U. S. Potash Corporation and U. S. Borax and Chemical Corporation, serving variously as director, Vice President, and General Manager. During this time they lived in New Rochelle, New York.

The nation's highest civilian award, the Presidential Medal of Freedom, was awarded to Mr. Albright by President Jimmy Carter on the 64th Anniversary of the National Park Service. President Carter announced the award in August of 1980, and the medal was presented on December 8 by Assistant Secretary of the Interior, Robert L. Herbst, in a ceremony at Van Nuys, California.

In the August 10, 1911 Midsummer Special edition of the Inyo Register, we find George Albright's profile as an outstanding citizen of the Owens Valley Community (click to enlarge): 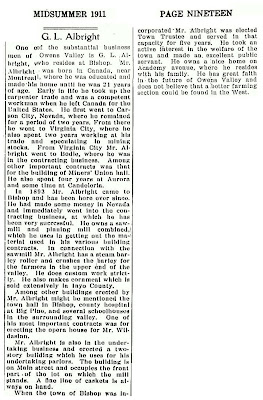 I found a few other references to George Albright in the Inyo Register that indicate that he worked on building the Salt Tram, and when I find them, I'll post them here.