QUESTION2: Examine Tower below that is well-marked with tower numbering to determine how that affects our assumptions about how these structures were built; some options regarding construction of the "Stick built" nature of Towers and Stations:
QUESTION3: Take a photo on the westside of the tramway to match the historical photo below (the one showing the spooling of the cable over the westside of the tramway.

Below is an excellent example of a tram part at the Summit Station (Control Station 3 and Station 20) that is labeled with the Station number. This photo was taken by Alan E. Click to enlarge. 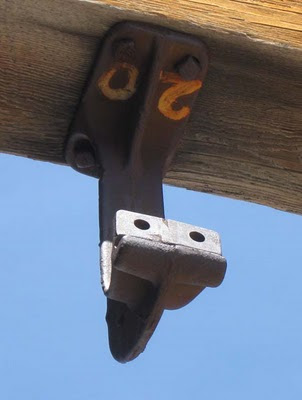 Below is another recent example of tram parts being labeled with the Station Number. In this case, this is a photo taken by Tim in March, 2010 at Station 29. This photo is of the side of the Weight Box at Station 29, and clearly marked with "S. 29". Click to enlarge. 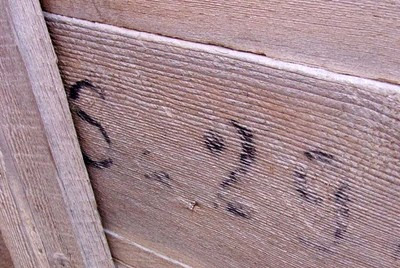 I forgot to mention to you in my previous e mail about the location of a marking on a beam located in the Summit Control Crossover Station. You may have already seen it but If you have not I wanted to bring it to your attention as it is hard to see. I am not sure at this time if it is a letter & a number or just numbers.

Standing inside the tram station looking down the right hand tram cable line which goes down to the Owens Valley. The location of the marking is on a large wooden timber that the outside metal sheeting is nailed to. It is to the right of the cable line and about 10-12 feet up from the wooden floor. When I first saw the markings I thought that the Tram Station had been built down in the valley and then assembled up on top. Good luck.  Regards, Bob 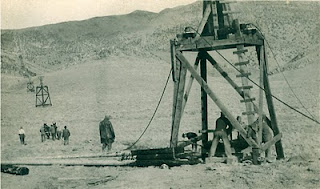 This westside tram photo above shows a number of important Salt Tram Construction activities:
Anyways, here is the photo, with an enhancement in photoshop at right to make the markings more clear: 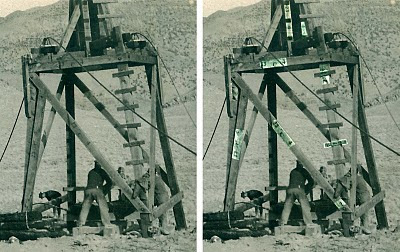 On an interesting side note, we believe that we have located this tower, and it is one of the rare westside towers that are still standing, owing largely to its distance from the road. It has not, as you shall see, escaped all vandalism. Let's take a look. First, here is a location that matches that of the full size photo above: 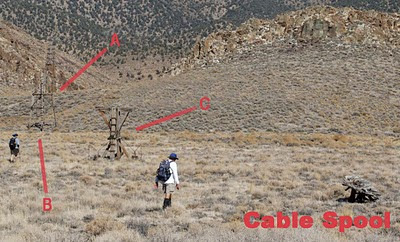 The photo above shows the 3 towers (A, B, C) located above (or east) of the marked tower in question. We note with fascination that Tower B was lowered from its original construction, as one of the many "tweaks" to the tramway to make it function properly. Below shows the same towers A, B and C in our historical photo: 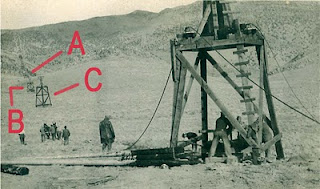 Unfortunately, we don't have a modern photo (but we will!) of Towers A, B, C and what we shall call Tower D (the one with the "23 C 4" markings on it), but I believe we do have a photo of that tower by itself, and here it is: 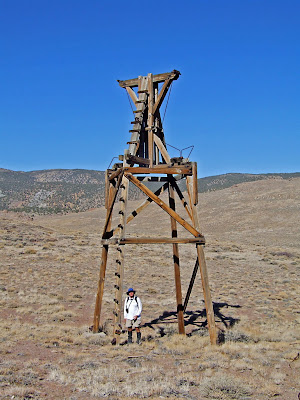 This photo shows Brian standing at the base of this Tower D (aka Tower "23 C 4"). Note the discrepancies with the historical photo of this tower: there are no horizontal boards at the base, which would seemingly rule it out as the same tower. However, note a detail of the photo above: 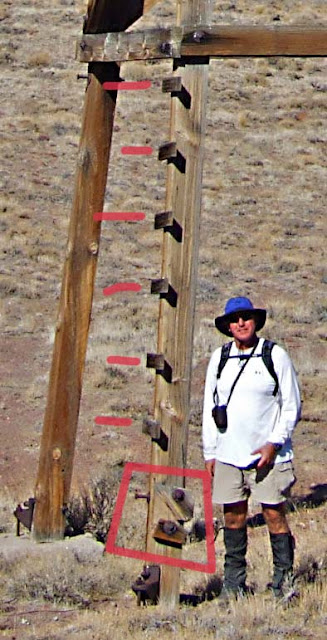 It seems that the original horizontal and diagonal beams were attached to this tower, but removed, as evidenced by the red box in this photo; you can also see the bolts sticking about where the cross beams were removed. Plus, both towers have 6 ladder steps nailed into one of the four corner supports, and it is the same corner as in our historical photo. Seems pretty conclusive to me!