Friends of the SALINE VALLEY SALT TRAM
www.SaltTram.blogspot.com   SalineValleySaltTram@gmail.com
As the years pass, researching the true story of the Salt Tram is getting more difficult, as the abundant photos and written first hand accounts from that era find their way into landfills (instead of museums). We  are striving to rediscover the efforts of those who built and ran the Salt Tram, in order to give proper recognition to their hopes, dreams and abundant sweat from an era that is rapidly fading from our memories.
We are actively seeking out information about the mining of Salt in Saline Valley between 1903 and the 1950's, including: documents, photos, articles, stories, artifacts, etc. If you can help us out, please email us at the address above - Thank-you! --Tim and Brian Waag, the Waag brothers (aka E. Clampus Waagus).
Caution (PLEASE READ): Climbing around on the tramway is dangerous because its really old and defnitely unsafe, so don't even think about it. Shoot, just getting to it requires some perilous hiking, and if you don't believe me, just take a look at the Zig Zag Access Trail (or what's left of it). Plus, climbing on it weakens it and endangers your life. Also, the Saline Valley Salt Tram is on the National Register of Historic Places and should be treated with the respect that it deserves. What little remains is of great historic value, and should not be disturbed in any way. Heck, its probably against the law to move parts of the tram around, and certainly a crime to take home some of the few bits of it that remain (though you'd have to ask your friendly local BLM agent for details). So please treat it with the respect it deserves, so that future generations can enjoy whats left, without you messing it up. Really. Please. You can see its listing on the National Register of Historic Places at these web links:
National Register of Historic Places 1          National Register of Historic Places 2
*********************************************************************************
Update: October 2010 -  Recently, our head Salt Tram geek, Tom, converted the Go-Devil route into some GPS file formats. One of the formats was able to be input into Google Earth, where we were able to obtain the following images. The first image is the entire Go-Devil route (click to enlarge): 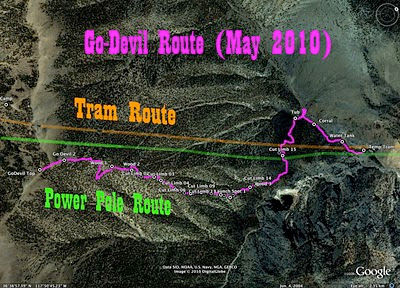 Below is the same Go-Devil Route as above with two changes: (1) its imported and displayed in the National Geographic Topo Software - California, version 4.2.8 for Macintosh (2) the route is smoothed out to more accurately represent the actual route, subtracting Tom and Brian's explorative deviations from the route itself. Click to enlarge. 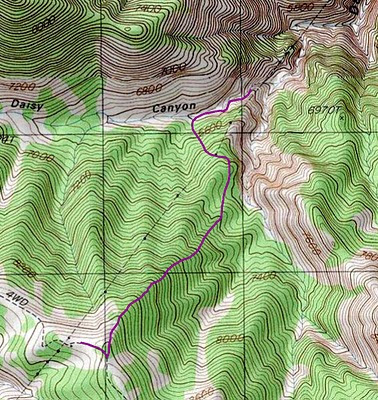 DISCUSSION REGARDING THE RECENTLY FOUND GO-DEVIL ROUTE
Tom and Brian traced the entire route in May 2010, and Tom produced GPS lat/long coordinates for it. Thanks Tom. Now trying to get clean routes of it, and the adjoining pack trail. We'd love to get the lat/longs for the Go-Devil route into our National Geographic topo software somehow - none of the formats below could be opened with National Geographic topo software - bummer.

REPLY TO FRED: Yeah, me too. I need to buy a good GPS and learn how to use it. I want to get the trails onto my National Geographic topo software somehow. Brian hasn't figured out how to do it yet, either. Part of the problem is that we use Macintosh computers, which do not work well with GPSs, as well as the Mac version of the National Geographic topo software is buggy and often crashes.

Not sure what to do with 1, as I don't have a Garmin GPS (except on my boat!). In theory, I should be able to open 2 with the National Geographic topo software, but I tried it and it did not work. Apparently not that common of a GPS data format! 3 and 4 are essentially the same, and I was able to open 3 in Google Earth, but it would not display the lat/long coordinates in the file - at least that I could figure out, and I can't get a detailed map from it, as you can't stitch together the separate little pieces that it lets you export in jpg format, as the perspective changes as you move along the route.

Also, I confirmed with Tom and Brian that the minor deviations (or major sometimes) deviations in the route are due to them exploring off to the side, and NOT because the Go-Devil route squiggles all over the place! Here's just one example - a close up of the entire route shown above (click to enlarge). 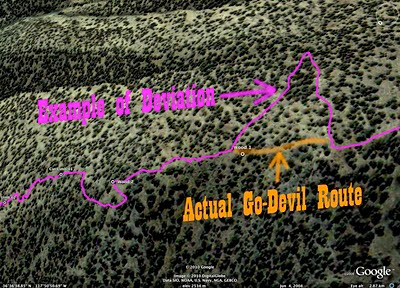 We have been looking for this route for some time, and we finally found it. Tom has the GPS coordinates for the entire route, so that we can record its location for all time. Unfortunately, we will NOT be posting it on this website, due to the fact that there are a small number of significant Salt Tram artifacts along the route that we would like to remain there. Sorry, guys. (If you join the "Friends of the Saline Valley Salt Tram" team, we just might show you where it is!).

More details to follow, but for now, here are 3 photos taken by Brian that show the cut logs and branches that mark parts of the Go-Devil route (click to enlarge): 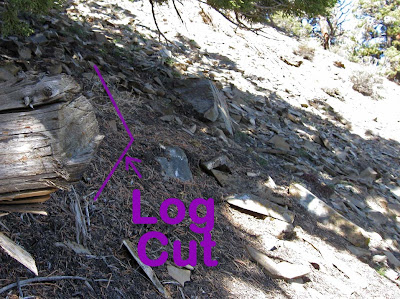 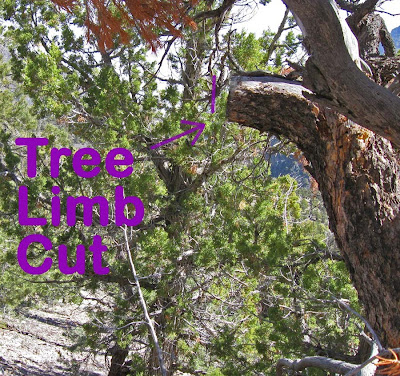 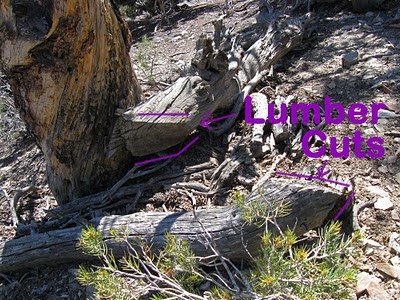 Here's an email quote from Tom after the May 2010 trip (regarding the finding of the Go-Devil route): "I think the combination of these cuts, tree stumps cut flush with the grade, lack of anything similar left or right of the path, the mostly consistent grade, lack of any obstacles and a subtle swale to the path, pretty much nails this as a some sort of purposely selected and cleared path. What else could it be? Brian gets all the credit for spotting the cut limbs to begin with. --Tom"