Friends of the SALINE VALLEY SALT TRAM
www.SaltTram.blogspot.com   SalineValleySaltTram@gmail.com
As the years pass, researching the true story of the Salt Tram is getting more difficult, as the abundant photos and written first hand accounts from that era find their way into landfills (instead of museums). We  are striving to rediscover the efforts of those who built and ran the Salt Tram, in order to give proper recognition to their hopes, dreams and abundant sweat from an era that is rapidly fading from our memories.  We are actively seeking out information about the mining of Salt in Saline Valley between 1903 and the 1950's, including: documents, photos, articles, stories, artifacts, etc. If you can help us out, please email us at the address above - Thank-you! --Tim and Brian Waag, the Waag brothers (aka E. Clampus Waagus).
Caution (PLEASE READ): Climbing around on the tramway is dangerous because its really old and defnitely unsafe, so don't even think about it. Shoot, just getting to it requires some perilous hiking, and if you don't believe me, just take a look at the Zig Zag Access Trail (or what's left of it). Plus, climbing on it weakens it and endangers your life. Also, the Saline Valley Salt Tram is on the National Register of Historic Places and should be treated with the respect that it deserves. What little remains is of great historic value, and should not be disturbed in any way. Heck, its probably against the law to move parts of the tram around, and certainly a crime to take home some of the few bits of it that remain (though you'd have to ask your friendly local BLM agent for details). So please treat it with the respect it deserves, so that future generations can enjoy whats left, without you messing it up. Really. Please. You can see its listing on the National Register of Historic Places at these web links:
National Register of Historic Places 1          National Register of Historic Places 2
*********************************************************************************
QUESTION1: Now that we have captured the image of White Smith's face, its time for his signature. Is the signature of the photo annotation below that of White Smith? If not, we are seeking his signature for our records.

QUESTION2: Identify the building (presumably in Bishop) that is tagged with the horizontal sign that reads "BANK". It is identified perhaps as being "City Market" but that just doesn't sound right.

QUESTION3: Identify all the White Smith brothers (and sisters?) that contributed to the financing, management, construction and operation of the Salt Tram. So far we are certain that Eugene and Fred meet this criterion. We also know that older brother Ambrose was the first Smith brother to move from Tennessee to Owens Valley, but we doubt that he worked on the Salt Tram in any meaningful way (wonder what the census shows as the occupation of brother Ambrose? - Brian? - See if Brian is reading this!!!).

One of the powerpoint slides in our Salt Tram presentation to various groups addresses the very fact that we are missing a confirmed photo of White Smith, the first President of the Saline Valley Salt Company. We have been confident all along that one of the many photos of the "people of the Salt Tram" includes White Smith - its just that we don't know which one he is! Here's the Power Point that we use (click to enlarge): 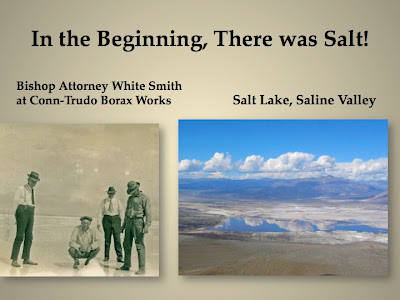 In the presentation, Tim refers to the left image, where he says "Here is a group of Salt Tram workers at the Salt Lake, including White Smith. Except we don't know if White Smith is one of these gentleman or not."

That is, until now.

Ironically, it turns out that White Smith IS in this photo, and we believe 1 or 2 of his brothers are in it as well. White Smith is the 3rd man from the left. We believe that this photo was taken some time around 1913.

However, the photo from Roberta at ECM was taken in 1926, a long 13 years later. Here is our first glimpse of White Smith in 1926, in the photo from the Eastern California Museum:

Sadly, the photo is oversatured in White's facial area, robbing us of quite a bit of detail in that area. Here's the photo that this image was pulled from (click to enlarge): 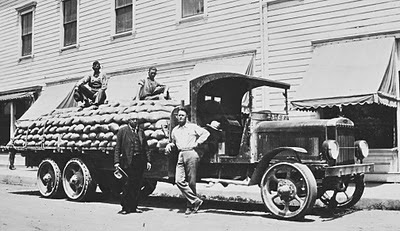 Roberta from the ECM also included the annotation that was found with this photo. Here's the readable one, which appears to be a transcription of the sloppy one (which follows afterwards): 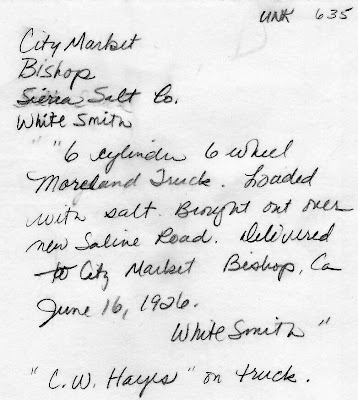 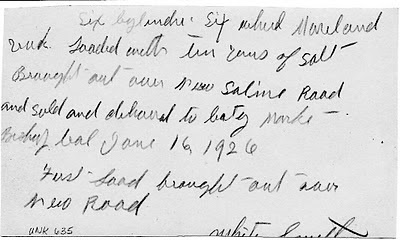 However, a few words in the first annotation appear to be missing when transcribed from the lower, sloppy one. Here's my best transcription of what these two say:

City Market, Bishop, Sierra Salt Co., White Smith
Six Cylinder - Six wheel Moreland
truck. Loaded with ten tons of Salt.
Brought out over new Saline Road
and sold and delivered to City Market -
Bishop, Cal. June 16, 1926.
First load brought out over new road.
--White Smith
Of course, the "New Saline Road" is none other than the San Lucas Canyon road. Roberta believes that the signature may be that of White Smith, but it is unfortunately, cut off on the scan.

Now that we have a photo of White Smith, its time to see if we have other photos of him in our Salt Tram photo archive. We immediately located a nearly identical one to the photo from ECM where White Smith, Esq. is identified. We believe that this photo was taken on the same day and in the same location as the ECM photo above. However, note that the truck was moved to (in what is in my opinion) a better location for the photo. White Smith is circled in red. We made a careful study of the high res version of both photos, and determined that it was the same truck: the salt bags matched exactly, as did the ropes and other small details about the truck that would change from load to load. Remember the annotated date of June 16, 1926. Click to enlarge. 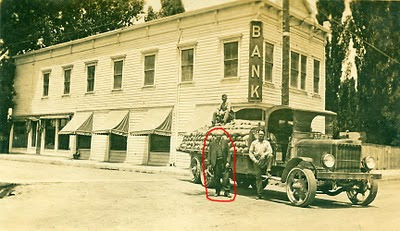 Without a doubt, the guy in the both images, believed to be White Smith, is identical, as can be seen here: 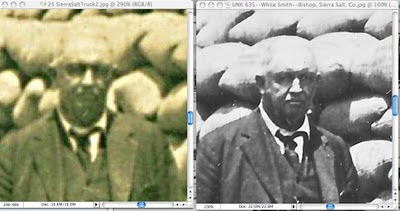 In these 1926 photos, White Smith would have been about 73 years old, which looks about right. Also, we currently believe that he died in 1927, although that information is still a bit weak. This would explain how aged Mr. Smith looks in these photos. The question now is: do we have any photos of a younger White Smith? This brings us back to the slide show image, which is magnified below (click to enlarge): 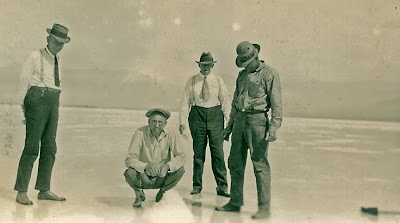 Once again, the man shown 3rd from the left is believed to be none other than Mr. White Smith, Esq., except that this photo was taken 13 years before, in 1913. Below you can see a comparison of the 3 images, and many of the features of the two 1926 photos match the "younger" Smith on the far right: similar hat, stocky, similar ears and nose, and well-dressed like the President of a company.

We will continue to peruse our historical Salt Tram photo collection to see if we have another images that match the 3 above.

In the meantime, here is a photo from historical "Frashers Photo of Pomona", which annotates the photo with a date of June 15, 1926 for the first load of salt over the "New Saline Road", a discrepancy of one day (June 16, 1926) from the annotation of the earlier photo: 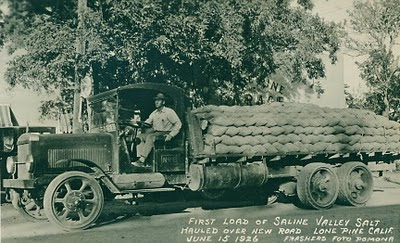 However, neatly hidden away on the right side of the tree is a sign painted on the building which says "Lone Pine Garage". We believe that the first load of salt out of Saline Valley over the treacherous San Lucas Canyon Road was taken out on June 15, 1926 as the photo immediately above indicates. It may have been parked overnight in Lone Pine, then driven the nearly 60 miles from Lone Pine to Bishop the next day, arriving at the June 16, 1926 annotation of the breakthrough photo. This assumes that we identify the photo of the Salt Truck in front of the "BANK" building as being in Bishop.

Thanks, Eastern California Museum for all the help!

Of those listed above, Eugene, Fred, Jed and Ned Smith are all believed to be siblings of White Smith. Only White's right-hand man, Will L. Smith, is definitely NOT related to White Smith.


There are several unidentified people that are shown repeatedly in our early Salt Tram era photos (i.e., 1911- 1913) that we now believe are some of White Smith's brothers. Here is another example of two of them: 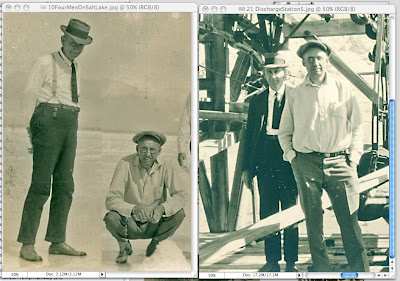 The left photo shows these 2 potential Smith brother's at the Salt Lake (in a photo that we have already seen in this blog post above) and the same 2 gentlemen on a different day, but this time the photo is taken at the Discharge Station in Tramway. There is a mild family resemblance to White Smith, and these are clearly Salt Tram manager types, and not workers (if you saw what the Salt Tram workers looked like you'd know what we mean!).

Brian lists in the "White Smith Geneaology" section of this blog, all the known siblings of White Smith (those in BOLD are known to have worked on the Salt Tram with White):


Note that absent from this list is a Ned or a Jed Smith. Edward Ball or Jessie J could have possibly been referred to in a nickname as Ned or Jed Smith; conversely, the newspapers of the time could have simply gotten their names wrong - we don't know, but we will get to the bottom of this one too!