Friends of the SALINE VALLEY SALT TRAM
www.SaltTram.blogspot.com   SalineValleySaltTram@gmail.com
As the years pass, researching the true story of the Salt Tram is getting more difficult, as the abundant photos and written first hand accounts from that era find their way into landfills (instead of museums). We  are striving to rediscover the efforts of those who built and ran the Salt Tram, in order to give proper recognition to their hopes, dreams and abundant sweat from an era that is rapidly fading from our memories.
We are actively seeking out information about the mining of Salt in Saline Valley between 1903 and the 1950's, including: documents, photos, articles, stories, artifacts, etc. If you can help us out, please email us at the address above - Thank-you! --Tim and Brian Waag, the Waag brothers (aka E. Clampus Waagus).
Caution (PLEASE READ): Climbing around on the tramway is dangerous because its really old and defnitely unsafe, so don't even think about it. Shoot, just getting to it requires some perilous hiking, and if you don't believe me, just take a look at the Zig Zag Access Trail (or what's left of it). Plus, climbing on it weakens it and endangers your life. Also, the Saline Valley Salt Tram is on the National Register of Historic Places and should be treated with the respect that it deserves. What little remains is of great historic value, and should not be disturbed in any way. Heck, its probably against the law to move parts of the tram around, and certainly a crime to take home some of the few bits of it that remain (though you'd have to ask your friendly local BLM agent for details). So please treat it with the respect it deserves, so that future generations can enjoy whats left, without you messing it up. Really. Please. You can see its listing on the National Register of Historic Places at these web links:
National Register of Historic Places 1          National Register of Historic Places 2
*********************************************************************************
QUESTION1: Collect documentation of the phone systems built and used in the construction and operation of the Saline Valley Salt Tram.
QUESTION2: Specifically, when, where, what and by whom were the first Salt Tram telephone lines strung? Was there a separate phone system for construction of the Salt Tram vs. the operation of the tram once verything was built?
QUESTION3: Were the twin bells that we know existed at the tram stations for the timing of the carriers (buckets), or for the ringing of the phone. Our guess is that it was for the phone ringing, rather than "gong spacing", as we guess that the tram was a fairly noisy environment, and the phone had to be heard in order to receive critical communication, such as when buckets got off the line or got tangled up, and the line had to be stopped. See Timing Bell or Gong?

First, lets start with what we know. Miraculously, we found a photo (Courtesy Eastern California Museum) of two bucket riders that includes what appears to be a crude, box-like telephone strapped to the side of the bucket. Getting onto the internet, I found that phones of that era pretty much looked like the box phones attached to a wall that we are so familiar with: mouthpiece attached to the lower part of the box, and the ear pieces on a cord that the user puts up to their ear, and then hangs it up on the side of the phone when they are done. Here's what that type of phone looks like (this is a 1910 Western Electric Model): 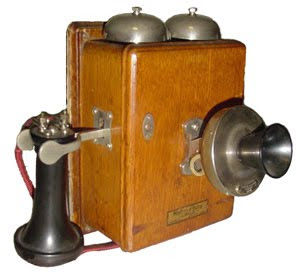 However, phones were beginning to advance in their appearance at that time as well, with some more resembling our modern phones, such as this 1910 Western Electric nickel plated model: 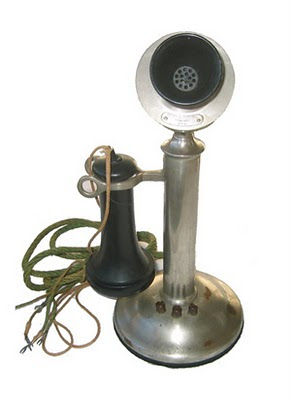 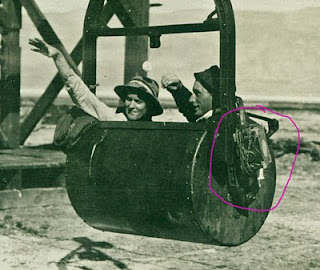 "Hi Tim, Yes.  That's called a 'lineman's test set'  They were designed to be carried up a pole by the lineman and to connect to the open wire via alligator clips. Thanks, Ron. Visit:  Cyber Telephone Museum   http://www.museumphones.com" 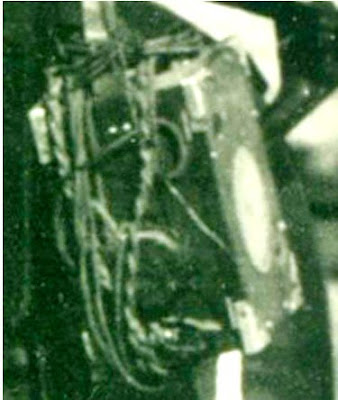 Above is a close-up zoom in of the phone attached to the Salt Tram carrier with the 2 people inside.

Obviously, I was pleased to find out that the object was indeed a type of telephone. So now we know what at least one type of Salt Tram Phone looked like. Off the top of my head, here are the ponderables for Salt Tram phone systems:
Here's what a modern "lineman's test set" style phone looks like: 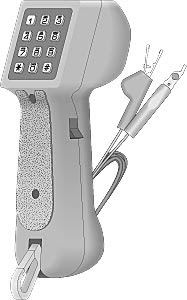 I also found this 1940's test set that looks much like the one in our Salt Tram photo: 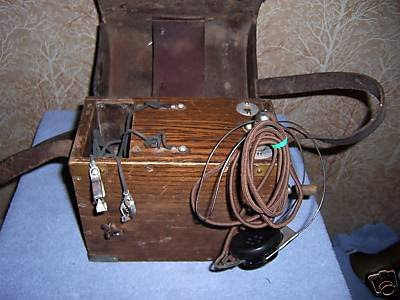