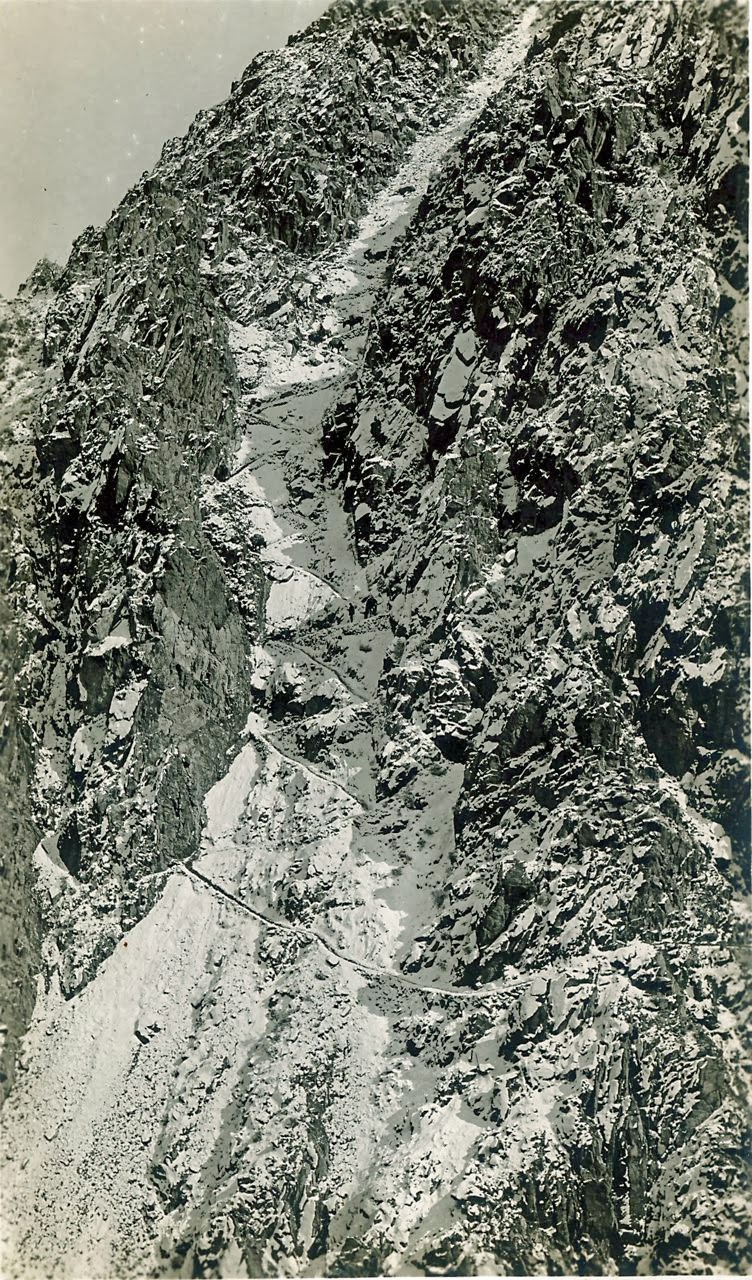 Above: the famous Salt Tram Zig Zag Trail - photo taken by Miles O. Bolser in 1913 - the first year of tramway operation.  (photo courtesy Eastern California Museum). Note that this trail has rockslided out and no longer exists! Click to enlarge.

David Hill of Ventura was the first of many Salt Tram researchers. He did his research back in the 1960's and 1970's. We asked Mr. Hill  how he found out about the Salt Tram, and he said it was through the Eastern California Museum in Independence, Calif. Apparently, at that time, they sponsored monthly “field trips”, one of which went to the Salt Tram. David regularly attended these outings, and so he first visited the Salt Tram in the 1960's.

Danger! (PLEASE READ): Climbing around on the tramway is dangerous because its really old and definitely unsafe, so don't even think about it. Shoot, just getting to it requires some perilous hiking, and if you don't believe me, just take a look at the Zig Zag Access Trail (or what's left of it - not much). Plus, climbing on it weakens it and endangers your life.

Do Not Vandalize, Steal or Disturb: Note that the Saline Valley Salt Tram is on the National Register of Historic Places and should be treated with the respect that it deserves. You can read about it's listing on the Register by clicking here and also by clicking here. There is little that remains of the tram, but what does has protection status, and cannot be disturbed in any way. Heck, its probably against the law to move parts of the tram around, and certainly a crime to take home some of the few bits of it that remain (though you'd have to ask your friendly local agent for details). So please treat it with the respect it deserves, so that future generations can enjoy whats left, without you messing it up. Really. Please.

We discourage anyone from visiting the Salt Tram, as nothing good could possibly come of it (see Danger! Do Not Vandalize - above) - just read this web site instead - its much safer! You can learn about becoming  a "Friend of the Saline Valley Salt Tram" by clicking here. We recently inquired about interest in a guided tour of the Salt Tram, and nobody was - a lot of smart, safe people out there! If you were to foolishly decide you might want to visit the Salt Tram, you could have 3 general options:

(1) End-to-end Salt Tram (hard core) hike. Its a tough multi-day hike to get from one end of the tram to the other. The elevation gains and descents are massive, and trails are largely non-existent, making route-finding difficult and mandatory. Also, there are lots of cliffs and drop-offs, and no cell-phone signal. Along the way, the hiker will encounter the washed out, steep and dangerous "Zig Zag Trail", so this option is severely difficult (rock climbing experience, and use of ropes and climbing harnesses is necessary on this section). 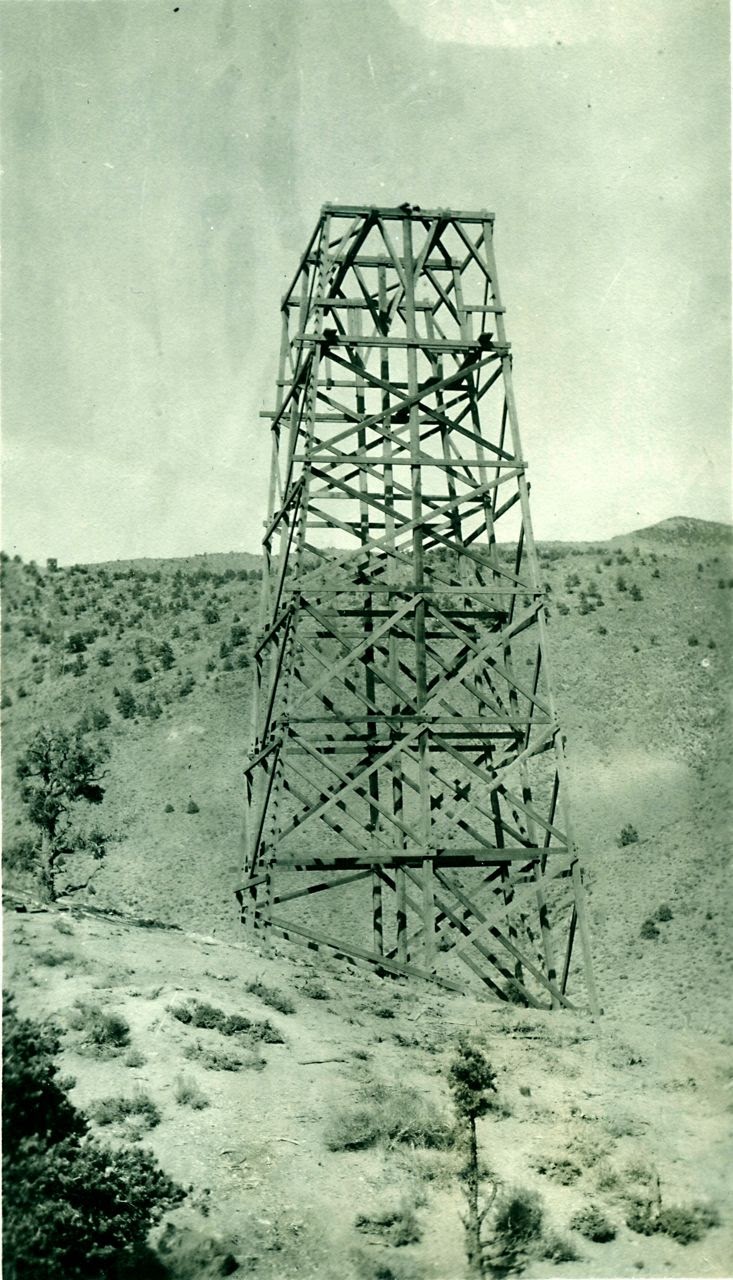 Above: Massive Tram Station (over 62 feet high). Photo Courtesy of the Eastern California Museum. Note that there are no hardware and cables on this tower - indicating that the tower had just been built with the tram hardware yet to be installed. Click to enlarge.

2) Discharge Station, Secret Wagon Route and on to Cliff's Station. The Salt Tram Discharge Station is quietly located near highway 190 and believe it or not, is still a fascinating site (even though everything burned down in an arson fire in 1949), and may be worthy of an outing. This would be followed by a dayhike along the lower western-most portion of the Salt Tram route, where everything except the concrete foundations of the towers have been salvaged or vandalized. 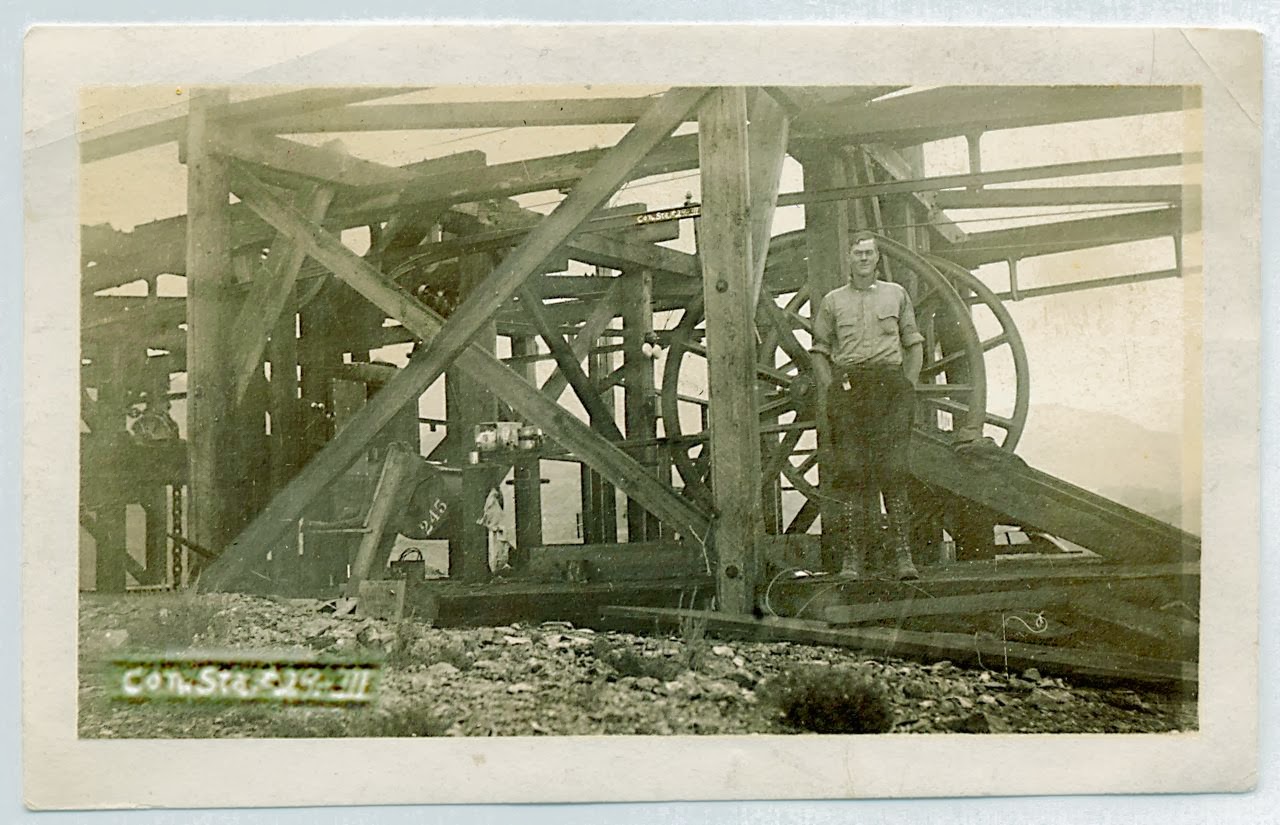 Above: Salt Tram Diarist Cliff Patterson poses at Control Station 4, where he worked after building the Salt Tram. This is the only known photo of Cliff to have ever been taken at the Salt Tram. This control station on the west side of the tram line has been heavily pillaged and only concrete foundations too large to remove remain. Photo courtesy of the Fred Patterson family. Click to enlarge.

3) Salt Lake Loading Station, and hike to Control Station 1. This is in Saline Valley and is be considered an overnighter. Consult other sources on the difficulty and dangers of driving in and out of this remote Valley. You can visit the Salt Lake Operations and Tram Loading Station by the Salt Lake which is inside of Death Valley National Park. Note that the lake operations and tramway have been scavenged at this site and nothing is left but concrete foundations of buildings, hidden in the salty mud, as well as a few forlorn, lonely tram towers.

This would be followed by an extremely strenuous, difficult, and optional dayhike along the Salt Tram pack trail - if you can find it. For this option, you would want to camp overnight somewhere in remote Saline Valley. Saline Valley is very hot - Death Valley hot - and should never be visited in the summertime unless you like crazy crazy fireball life-threatening heat. 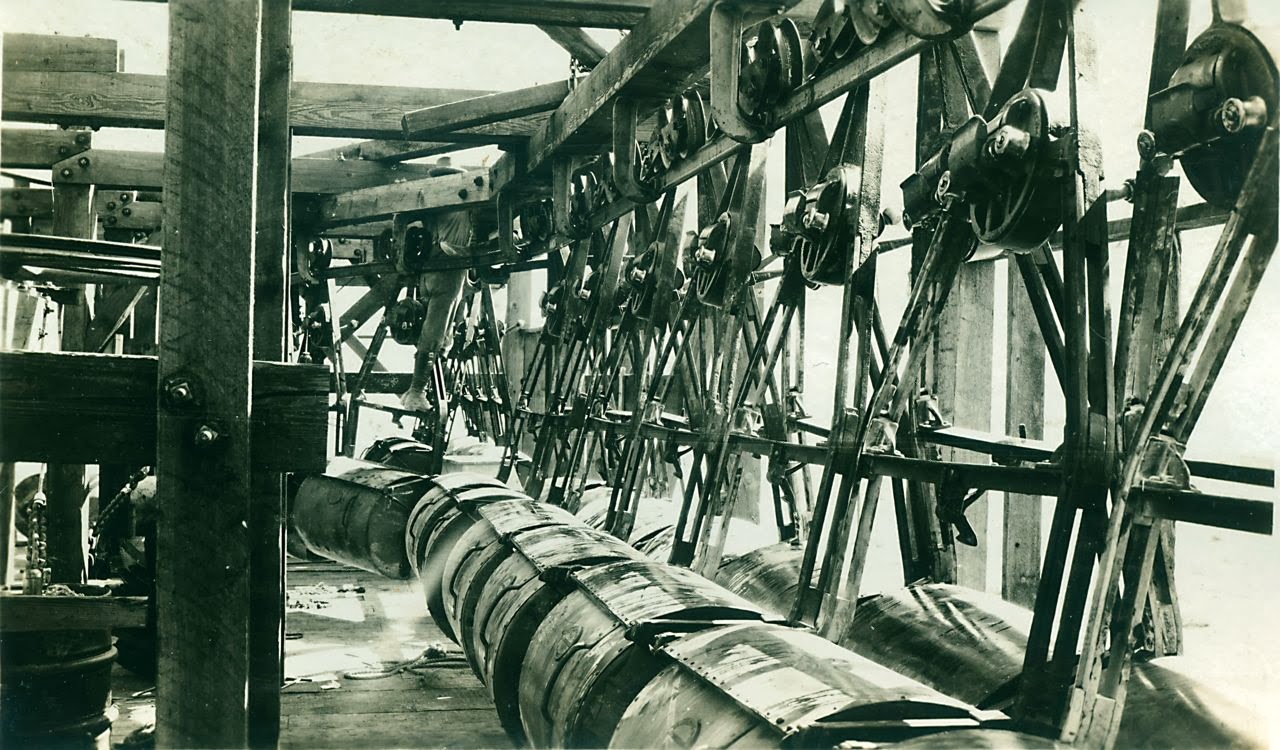 Above: Salt Tram buckets lined up and waiting at the Loading Station at the Salt Lake. Photo Courtesy of the Eastern California Museum. Click to enlarge.

Final Warning: The goal of visiting the Salt Tram is to appreciate the historical significance and importance of preservation of White Smith's amazing Tramway, as well as an understanding of the Salt Tram's unique history - period. The hazards of viewing and exploring the wild Salt Tram located outdoors in the dangerous dry desert and steep mountains are countless and unpredictable - you have been warned!