Friends of the SALINE VALLEY SALT TRAM
SaltTram.blogspot.com   SalineValleySaltTram@gmail.com
Salt Tram history is rapidly disappearing, and we are striving to rediscover the efforts of our forefathers in order to give proper recognition to their hopes, dreams and abundant sweat from an era that is rapidly fading from our memories. We are actively seeking out information about the mining of Salt in Saline Valley between 1903 and the 1940's, including: documents, photos, articles, stories, artifacts, etc. If you can help us out, please email us at the address above - Thank-you! --Tim and Brian Waag, the Waag brothers (aka E. Clampus Waagus).
Caution (PLEASE READ): Climbing around on the tramway is dangerous because its really old and defnitely unsafe, so don't even think about it. Shoot, just getting to it requires some perilous hiking, and if you don't believe me, just take a look at the Zig Zag Access Trail (or what's left of it). Plus, climbing on it weakens it and endangers your life. Also, the Saline Valley Salt Tram is on the National Register of Historic Places and should be treated with the respect that it deserves. What little remains is of great historic value, and should not be disturbed in any way. Heck, its probably against the law to move parts of the tram around, and certainly a crime to take home some of the few bits of it that remain (though you'd have to ask your friendly local BLM agent for details). So please treat it with the respect it deserves, so that future generations can enjoy whats left, without you messing it up. Really. Please. You can see its listing on the National Register of Historic Places at these web links:
http://www.nationalregisterofhistoricplaces.com/ca/Inyo/state.html
http://www.noehill.com/inyo/nat1974000514.asp
*****************************************************************************************
QUESTION 1: Determine how the timing bell functioned - both physically and operationally. 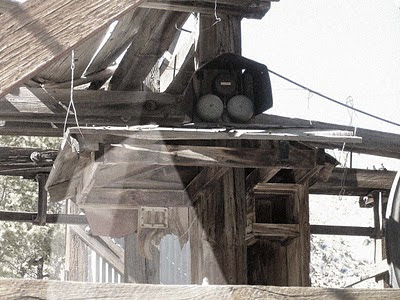 Photo courtesy of the Eastern California Museum. Click on photo to enlarge.

RICK (ORIGINAL QUESTION): What kind of power was used to activate the signal bells at the Control Station?  Footnote:  did you know that William Randolph Hearst (Hearst Castle) put in a set of bells at the main house but decided he did not like them .... consequently, no one ever heard them "back in the day".  Not too long ago, the park service decided to fire them up ... and as far as I know they still run them, but only at noon. If a person were to take the "Garden Tour" that starts at about 11:40 am .... you can hear them .....  no other tour would be in the exact correct place at the estate to hear them at that time of day as far as I know. 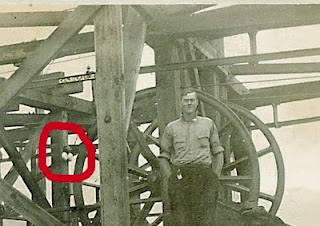 Photo Courtesy of the Patterson Family. Red circle identfies the location of the bellset at what we believe was Control Station 4 (current condition of CS 4 is completely vandalized, destroyed and carted away). Click on photo to enlarge.

TIM: The ASCE 1917 article references the fact that the salt carriers' spacing was controlled by the *tap of a spacing gong* (see ASCE 1917 document below). We haven't yet analyzed the *spacing gong* functionality in detail, but there  is a a historic photo from the Eastern California Museum (see above). The photo of our Salt Tram diarest, Cliff Patterson, at what I believe is CS 4, and the bells can clearly be seen (and circled in red in the photo). Sadly, the photo is not all that clear. Re: heart castle - still run the bells, as far as I know.

BRIAN: Don't know for sure what voltage the bell operated at.  Can't assume it's 120 vac.  Don't know the operating voltage of the bells.  The motor voltage was 2200 volts, and assume that there was at one time a transformer to step the voltage down for operation of the bells?  No evidence of a step down transformer but certainly could have been removed by someone as unfortunately there was quite a bit of vandalism to the conduit and wire.  There were wires hanging off but the conduit was pretty much gone so hard to say what operated them.

LEWIS: The Bell pictured would have a relay/ coil circuit that would operate very similar to the old bell ringer in a older telephone. (remember those?) A voltage would energize a coil which would cause the striker to hit one bell, the voltage would then be cut off causing the striker to hit the other bell. Typically this would be an AC voltage at a low frequency, 40 to 60Hz thus cycling on/off. There are other simple circuit configurations for ringing bells that may be used. Over time, the relay in the bell unit would be frozen from exposure to the elements. Also, the plate that can be seen in the picture on the cover of the ringer circuit would list the necessary operating voltage.

TIM: Below (document Courtesy of the Brian Webb collection): the text below that is highlighted in red, gives an indication of the purpose of the spacing gongs. Note that it only describes the gong at the Loading Station at the Salt Lake, and not those the bells that used to exist at the Control Stations, whose function is still uncertain, but I believe is for the ringing of the telephone system. 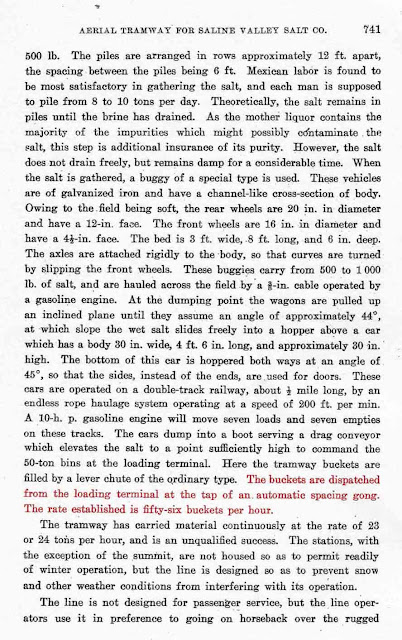 CRB:  My 2 cents worth:  I think the spacing gong is a different concept than the bells pictured.  "A tap of an automatic spacing gong"  brings to mind a gong with a striker that hits once when needed.  The bell pictured in the photo was most likely a remote telephone bell ringer such as you would see in a noisy environment such as a shop, plant or the tramway, which I would imagine was quite noisy.  While I don’t remember any telephone equipment during our visits in the 1960's, I do remember quite clearly old crank wall phones at Beveridge millsite, that ran up to the mine and perhaps to some of the other cabins further down the canyon.   I  have a very similar bell to the one pictured, and will attempt to locate it and see what voltage actuated it.  If I recall correctly, the old hand crank telephone magnetos produced 40-60 volts, definitely enough to give you a tingle.

TIM: Yes, I bet the bells (shown in the first photo above) were for the telephone line, not for the so-called spacing gong! Like I said, what would be the point of a spacing gong at a mid-control station? In theory, the carriers / buckets should *already* be spaced. I wondered how the phone lines used at the Salt Tram might have worked - they certainly had to ring so that they knew to answer the phone, and they would have had to have been loud to be heard over the operation of the tram itself - I think you are on to something!