Friends of the SALINE VALLEY SALT TRAM
SaltTram.blogspot.com   SalineValleySaltTram@gmail.com
Salt Tram history is rapidly disappearing, and we are striving to rediscover the efforts of our forefathers in order to give proper recognition to their hopes, dreams and abundant sweat from an era that is rapidly fading from our memories. We are actively seeking out information about the mining of Salt in Saline Valley between 1903 and the 1940's, including: documents, photos, articles, stories, artifacts, etc. If you can help us out, please email us at the address above - Thank-you! --Tim and Brian Waag, the Waag brothers (aka E. Clampus Waagus).
Caution (PLEASE READ): Climbing around on the tramway is dangerous because its really old and defnitely unsafe, so don't even think about it. Shoot, just getting to it requires some perilous hiking, and if you don't believe me, just take a look at the Zig Zag Access Trail (or what's left of it). Plus, climbing on it weakens it and endangers your life. Also, the Saline Valley Salt Tram is on the National Register of Historic Places and should be treated with the respect that it deserves. What little remains is of great historic value, and should not be disturbed in any way. Heck, its probably against the law to move parts of the tram around, and certainly a crime to take home some of the few bits of it that remain (though you'd have to ask your friendly local BLM agent for details). So please treat it with the respect it deserves, so that future generations can enjoy whats left, without you messing it up. Really. Please. You can see its listing on the National Register of Historic Places at these web links:
http://www.nationalregisterofhistoricplaces.com/ca/Inyo/state.html
http://www.noehill.com/inyo/nat1974000514.asp
*****************************************************************************************
QUESTION 1:  Starting with the existing hand-drawn map, complete the investigation of this main site of the Salt Tram Discharge Station, including key measurements that are missing from the map, as well as concrete foundation structures that are also missing from the map. 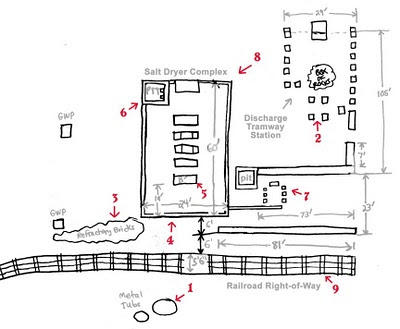 Image 1 (below) identifies 2 metal corrugated and galvanized tubs that are likely, but not definitively, associated with the Salt Tram operation at this site. They are both buried up to the grade, with the one in the foreground substantially larger than the one in the background of the photo. Again, the tubs are filled with debris, thus hindering investigation (note to those visiting the site: do NOT distrub a single hair of material, both human-made and natural, in order to preserve it for future hoped-for investigation). 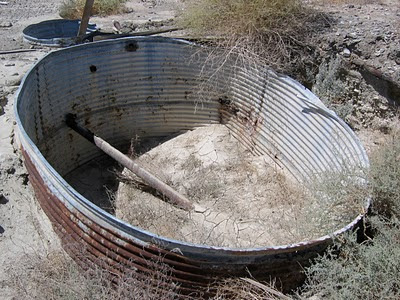 Image 2 (below) gives a view of the foundation for the Tramway Discharge Terminal itself, along with the remains of the rocks used as a counterweight for the track cable or the traction/drive cable, which we refer to as the "box of rox", since for the Salt Tram, the cable counterweights were consisted of wooden boxes filled with local rocks collected on-site. The wood used to construct the box has long been carted away, leaving the once-mysterious pile of rocks in a mild alluvial area largely devoid of such rocks. The metal attachment points are still to be found in the middle of the rock pile, if one looks carefully. In addition, in the debris in the foreground is a badly decomposed drive wheel or flywheel, which we have yet to analyze to determine where it fit in the tramway machinery. However, due to the dense salt content of the area, it has badly decomposed and there is not much left of it. No photo of the wheel is currently available. 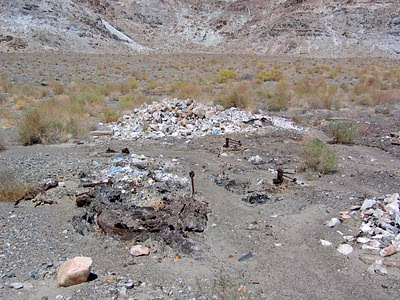 Image 3 (below) shows a portion of the large pile of so-called "refractory bricks", which we believe were used as a liner inside the salt drier. As part of our theory of the 2nd drier, the first would have been deconstructed on site, and the bricks dumps a simple debris to be shoved out of the way, but not disposed of off-site. 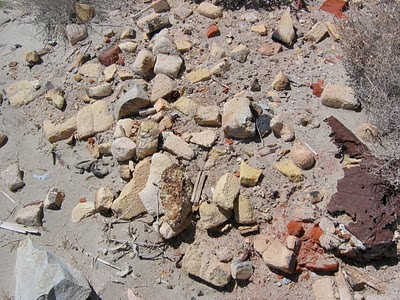 Image 4 (below) shows a frontal view of the salt drier supports, as well as the first "station" east of the discharge station, high on the first of many ridges traversed by the Salt Tram: 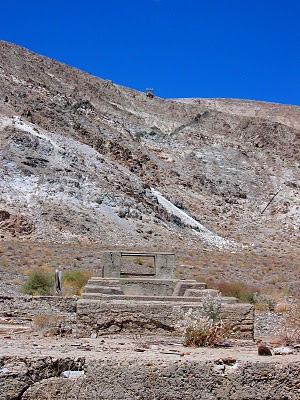 Image 5 (below) shows a closeup of the salt drier foundation supports. It appears that these supports do NOT match the supports shown in the historical photos of the salt drier. We believe that it is possible that the drier was upgraded at some point in the operation, and a new foundation poured. There is some on-site evidence for this (re-poured concrete from different eras), as well as historical photographic evidence (in one operational salt drier photo, the drier is "al fresco", whereas in the majority of photos of this section of the facility, the drier area is completed enclosed in a corrugated metal shed-type housing). 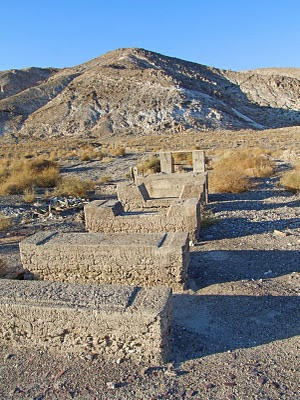 Image 6 (below) shows one of the 2 curious "pits" in the foundation. This one has 2 posts sticking out of it. The function of the pits is unknown, and would require some excavation to determine, as there is a large amount of debris in the bottom of each pit (mostly wood and metal bits). 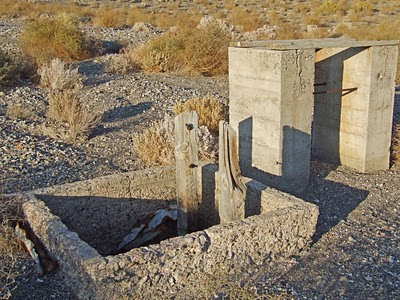 Image 7 (below) shows some detail of the small concrete foundation posts whose purpose is currently unknown: 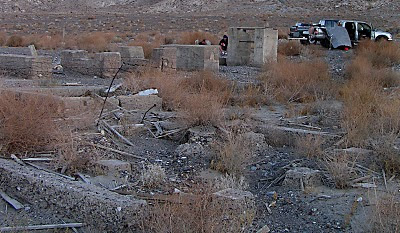 Image 8 (below) shows another view of the Salt Drier foundation remains. In this shot it is easy to view the angle of the various concrete structures that support the Salt Drier: 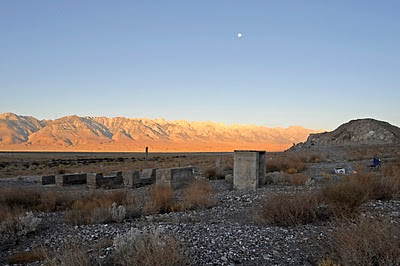 Image 9 (below) shows the only 2 remaining railroad ties from the spur that serviced the Salt Tram Discharge Station (note that for clarity, I have outlined one of the ties in green): 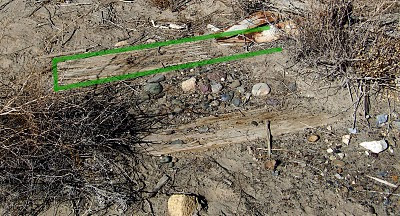