Friends of the SALINE VALLEY SALT TRAM
SaltTram.blogspot.com   SalineValleySaltTram@gmail.com
Salt Tram history is rapidly disappearing, and we are striving to rediscover the efforts of our forefathers in order to give proper recognition to their hopes, dreams and abundant sweat from an era that is rapidly fading from our memories. We are actively seeking out information about the mining of Salt in Saline Valley between 1903 and the 1940's, including: documents, photos, articles, stories, artifacts, etc. If you can help us out, please email us at the address above - Thank-you! --Tim and Brian Waag, the Waag brothers (aka E. Clampus Waagus).
Caution (PLEASE READ): Climbing around on the tramway is dangerous because its really old and defnitely unsafe, so don't even think about it. Shoot, just getting to it requires some perilous hiking, and if you don't believe me, just take a look at the Zig Zag Access Trail (or what's left of it). Plus, climbing on it weakens it and endangers your life. Also, the Saline Valley Salt Tram is on the National Register of Historic Places and should be treated with the respect that it deserves. What little remains is of great historic value, and should not be disturbed in any way. Heck, its probably against the law to move parts of the tram around, and certainly a crime to take home some of the few bits of it that remain (though you'd have to ask your friendly local BLM agent for details). So please treat it with the respect it deserves, so that future generations can enjoy whats left, without you messing it up. Really. Please. You can see its listing on the National Register of Historic Places at these web links:
http://www.nationalregisterofhistoricplaces.com/ca/Inyo/state.html
http://www.noehill.com/inyo/nat1974000514.asp
*****************************************************************************************
This post uses the crude map of the discharge station site to highlight some of the views of few remaining photos of this once mighty facility. Unfortunately, we have (so far) only discovered 2 photos of the inside of this facility (3 if you count the salt driver before the building was paneled with corrugated metal), and these are both of poor quality. Nonetheless, all 3 are displayed here. Historical photos in this sequence are (by and large) courtesy of the Eastern Sierra Museum in Independence, California.

The red image numbers (of the not-to-scale floor plan) correspond to the photos with the same numbers. The red arrow indicates the direction in which the photo was taken, thus clarifying the orientation of the image. In most cases, the photo was taken much further away than is indicated in the drawing. 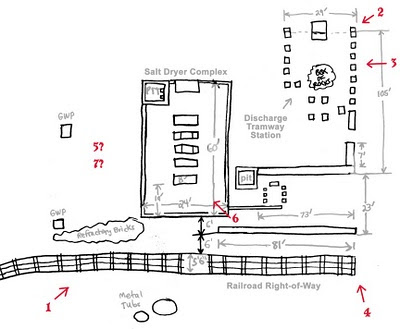 Image 1 (below) gives a great view of the Salt Tram Discharge Station, clearly showing stacked bags of salt, 3 railroad cars waiting to be loaded, a stockpile of salt ready to be dried during the winter months (when the tram did not run), and what we believe could be the discarded remains of the original salt drier (more on this in the next blog post). 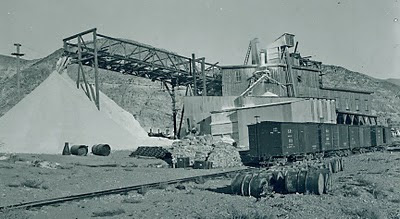 Image 2 (below) is a fascinating and rare photo, showing the Discharge Station looking from the back out towards Owens (somewhat) dry lake. It shows some great details, many of which we have yet to figure out their function. The large pole in the left center of the frame is not (we believe) a power pole, as there are no insulators on the pole where the wires are attached, but we have yet to determine its function. It appears that the platform near the top is for a person to stand upon, and there is a cable going straight down from the top of the pole that may have been used for a person to climb to said platform. This photo also gives many more clues as to the operation of this discharge complex. Another mysterious detail are the strange structures (we don't even know how to describe them!) attached to the cable, and being spread out like a deck of cards in the hands of a magician! Once again, if anybody out there understands the functioning of this machinery, please contact us! 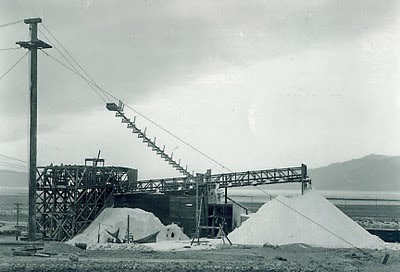 Image 3 (below) shows the Tramway Discharge Terminal looking to the North. From this shot, it is obvious that the tram has been running for some years, as there is a bucket on the tramway, 3 autos parked near the back, and a large junk pile further to the east (to the right of the cars).

Image 4 (below) gives a great frontal view of this monstrous Salt Tram Discharge Station facility. The railroad tracks from the spur serving the Salt Works are hard to see in the front of this building, but they are there. The building, with the exception of the 3-story Tramway Bucket turnaround structure (which is largely open to the elements), is constructed using the Board-and-Batten Siding style. This style consists of boards that are secured vertically to the exterior of the building, with smaller boards secured over the joints. In the U.S., this was a popular siding for barns, as well as houses between 1850-1920. Notice the large spools of tramway cable in the foreground. 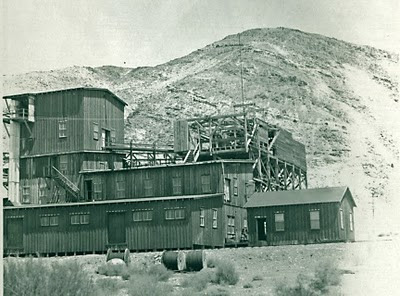 Image 5 (below) shows one of only 2 interior shots of the Salt Tram Discharge Station. We have no idea what function the machinery performed, but believe that it would have been powered by electricity, just like the Salt Tram itself (if you can identify the function of any of the machinery in this photo, please email or call us ASAP - thanks!). Also of great significance is the use of indoor electrical lighting, as evidenced by the 2 lightbulbs hanging from the ceiling. We have no idea where this machinery would have been located in the Discharge Station complex. 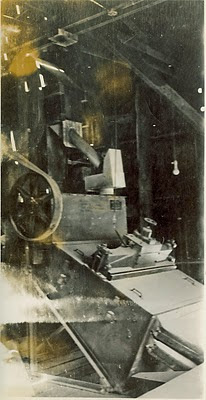 Image 6 (below) shows the huge salt drier used, not surprisingly, to dry the still moist to dripping wet salt that was recently trammed over the Inyo Mountains. It is not clear from this photo whether or not the drier was currently operational, as there is both evidence for and against that proposition in this photo; currently, we lean towards it being operational in this photo, if what we assume to be bags of salt (ready for shipment) actually are bags of salt! (they could, of course, be many other things besides salt). Of greater interest for our purposes here, it is clear to us that the concrete foundations for this drier do NOT match what is currently "en situ" (see next blog post for further details). For this reason, we believe that at some point in time during the salt mining operation, this original drier was replaced with a new drier, which required a completely different foundation. Also of interest here is the lack of corrugated tin outer paneling that appears in all other photos of this section of the discharge station. Whether this drier operated without benefit of a weather-protection enclosure, or the enclosing metal had yet to be installed is not clear to us. 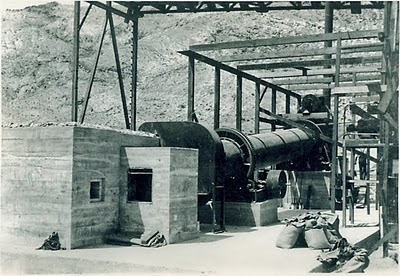 Image 7 (below) was taken from the following publication (its sure a mouthful!):


Image 7 shows a surprisingly detailed interior of what appears to be a salt bagging plant. The photo is staged to some degree, as it features a large dolly with a display of various bags (and assumedly) grades of salt. The photo may have been used for promotional purposes of some sort. The location of this facility is unknown, though the caption indicates it is a sacking facility for the "Owens Valley Salt Company", which means it is likely to be at the Discharge Station site. Note that the building walls have horizontal boards with light showing through, similar to the construction of most rural barns. No evidence of any building of this type is shown at the Discharge Station site, as can be seen from the numerous photos on this blog post. 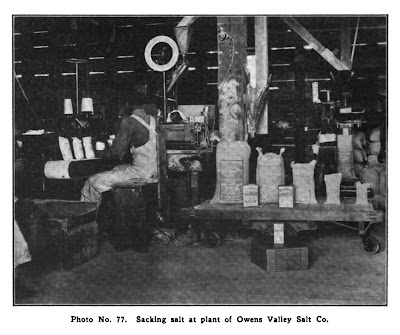