Friends of the SALINE VALLEY SALT TRAM
SaltTram.blogspot.com   SalineValleySaltTram@gmail.com
Salt Tram history is rapidly disappearing, and we are striving to rediscover the efforts of our forefathers in order to give proper recognition to their hopes, dreams and abundant sweat from an era that is rapidly fading from our memories. We are actively seeking out information about the mining of Salt in Saline Valley between 1903 and the 1940's, including: documents, photos, articles, stories, artifacts, etc. If you can help us out, please email us at the address above - Thank-you! --Tim and Brian Waag, the Waag brothers (aka E. Clampus Waagus).
Caution (PLEASE READ): Climbing around on the tramway is dangerous because its really old and defnitely unsafe, so don't even think about it. Shoot, just getting to it requires some perilous hiking, and if you don't believe me, just take a look at the Zig Zag Access Trail (or what's left of it). Plus, climbing on it weakens it and endangers your life. Also, the Saline Valley Salt Tram is on the National Register of Historic Places and should be treated with the respect that it deserves. What little remains is of great historic value, and should not be disturbed in any way. Heck, its probably against the law to move parts of the tram around, and certainly a crime to take home some of the few bits of it that remain (though you'd have to ask your friendly local BLM agent for details). So please treat it with the respect it deserves, so that future generations can enjoy whats left, without you messing it up. Really. Please. You can see its listing on the National Register of Historic Places at these web links:
http://www.nationalregisterofhistoricplaces.com/ca/Inyo/state.html
http://www.noehill.com/inyo/nat1974000514.asp
*****************************************************************************************
QUESTION 1:There is much research left to be done to determine how the Salt Tram Discharge Station Complex functioned. Missing data needs to be filled in as best as possible. Without further concrete data (no pun intended) about the Salt Tram Discharge Station (from photos, engineering drawings, etc. of the Salt Tram), our one great hope is the recently acquired book entitled "Salt in California", State of California, Department of Natural Resources, Bulletin 175, 1957, Division of Mines, Ferry Building, San Francisco, by William E. Ver Planck (with a chapter by Robert F. Heizer), Price $3.25, March, 1958. This book (all 273 pages of it - thanks Tom for printing it out for us!), has 2 chapters which may prove useful: Chapter 2: Methods of Recovery, and Chapter 3: The Refining of Salt.

Photo above (Courtesy of Eastern California Museum): Wide angle view of the Salt Tram Discharge Station Complex, as seen looking west towards Owens Lake. This scan of a print is a proof from a very large printout by "Bledsoe Photo Co. of L. A. Cal".

November, 2009 Salt Tram Research Trip (Independence, California): We made this trip to begin our periodical research, but made a side trip out to Swansea to take another look at the Salt Tram Discharge Station. Each time we visit a Salt Tram site, we are armed with greater knowledge of its operation, and therefore, find more evidence on the ground that previously went either unnoticed, or unrecognized. Brian and I went out with Chris "Lucky Pabst" (of Lone Pine) and explored around for a few hours. We brought our 100' tape measure, and scratched out this pathetic drawing (apologies to BWebb) that gives an idea of the layout of the Salt Tram's western-most industrial (non-residential) structures. 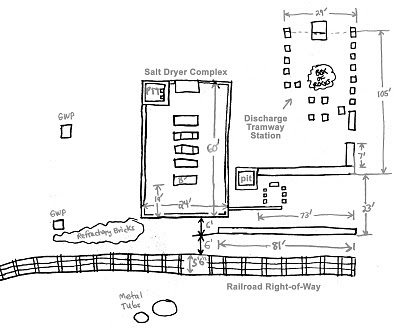 The next 2 blog posts also discuss the Discharge Station in excessive detail, but I will list here what we did find on this brief excursion:

1) The history books managed to dub the Salt Tram's mini-city at the discharge station as "Tramway", for that was what was listed in the railroad maps as the name of this side spur destination. However, judging from "Cliff" Patterson's diary, in which he referred to this site as "Swansea", that is what we shall call it, until a reason to call it something else comes along. (I dug out the National Geographic Topo Software and created this little map; the route in blue from the Salt Tram Discharge Station to Swansea is 1.1 miles; the red extension of the Salt Tram is due to the fact that, for some strange reason, this one tiny segment of the tramway is NOT shown on the topo map; and finally, the Swansea town complex, never very large, is circled in red). 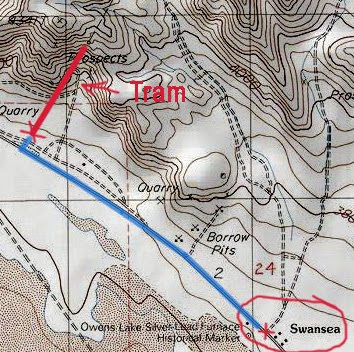 2) Historical references indicate that 2 wells in the area of Swansea supplied water to the Salt Tram workers, and we found one of them, and no, we didn't take a photo 'cuz nobody had a camera on them at the time (long story; but short story: we're not too bright, sometimes).

3) There are petroglyphs nearby - and no, no photos of them either.

5) There was a nearby Chinese camp that was alleged to have been for the laborers who built this side spur. We actually found the camp, and the pipe that fed the camp with water from a nearby spring - you guessed it, no photos of this either.

6) Concrete foundation for the water tank shown in several photos no photos of that either. But at least we have a historical photo of the water tank for you to see: 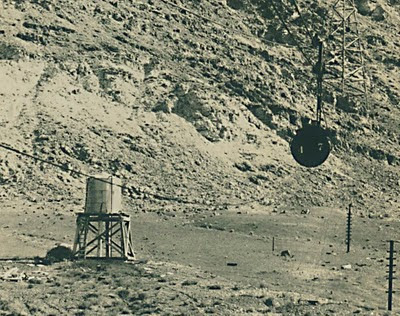 7) The remains of one of the largest outhouses in the world (okay, an exageration) - no photos of that either. And yes, we do have a historical photo of the crapper, and here it is (also courtesy of the Eastern California Museum!): 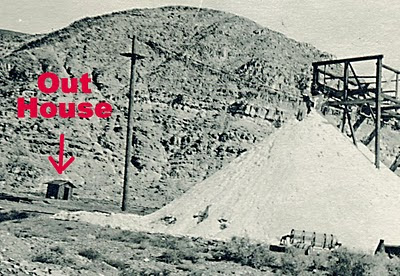 8) We found lots of other stuff, but since this was a preliminary investigation, we'll document and photograph these things at a later date.

1. DISCHARGE TERMINAL: This 4 story structure served as the final destination for the fully laden salt carriers (buckets). Upon arrival, they were automatically detached from the traction cable, giving the operator 56 seconds to dump the bucket into a chute that dumped the salt in a bin below the carrier deck (sounds so Navy!) using gravity. In fact, the reason the final station situated alongside the every drier Owen's (semi) Dry Lake was so tall was, in fact, to take advantage of gravity, where moving 20 tons of salt per hour (the stated capacity of the tramway) without the help of gravity would be plain silly! After dumping, the operator would push the salt carrier back towards Saline Valley, where the traction cable would automatically be re-attached and the bucket would be one its very long way back for another load of salt.

2. SALT STORAGE: We believe that the Salt Tram did not run all year 'round, with much evidence to support that. For instance, the capacity of the discharge terminal operations to process salt was much less than the 20 tons per hour that the tramway was capable of delivery the salt, logically supporting the need to run the tramway only at a level to support the salt procesing operations. Also, the historical photos show salt being piled up both at the Saline Lake (waiting to ride the tramway to Swansea), and being piled up at Swansea (waiting for its turn in the salt drier, followed by the salt grinders). Therefore, the machinery at the Discharge Station clearly show a path to mass storage of salt, which consisted of a giant pile of the white stuff (we wonder, with the strong winds know to pass through the area on a frequent basis, how often the salt pile was buffeted by winds, and how much was blown off the pile?).

3. SALT DRYING: The salt came by way of tramway to the discharge station with a moisture content that varied from moist to soggy. Therefore, the salt drier did its thing to dry the raw salt. We assume (with no evidence yet) that it was dried before it was grinded into different grades of salt - makes sense to us, yet we are seeking actual evidence to support this fact - stay tuned.

4. SALT GRINDING: To turn pure, dry salt into saleable products, grinding to various grades is required. Some mention is made of 5 to 8 grades of salt, from rock salt for roads, to powdery salt for flatjack mix. This complex had machinery, probably powered by that new and convenient energy source, electricity, that ground the salt into the necessary grades before bagging and shipping.

5. SALT PACKAGING: Evidence suggests that the various grades of salt required various sizes of bags in which it is sacked and shipped. This required machinery to sack and seal the bags, although it appears that human power was used to stack the bags next to the railroad (see the historical photos), and further, to move the sack pile into the railroad cars themselves.

6. SALT SHIPPING: Once dried, grinded, and sacked, the bags of salt were moved onto the railroad cars for shipping to various salt depos across the land (or least where the railroad tracks carried them).

7. BUSINESS OFFICE: The Swansea Salt Tram complex was the closest buildings to civilization, so we imagine that there must have been a business office for the "care and feeding" of the available salt sales outlets. Before being shipped, there surely must have been sales contracts, and communication of shipping and receiving dates and methods of payments. These buildings pictured are large, and surely had room for a business office or two. Note also that in the diary of Henry Clifton Patterson, he gives frequent reference to "spending the day in the office", which well may have referred to the office at Swansea.

CONCLUSION: Much activity went on at the massive Salt Tram Discharge Station Complex, and we have much to learn about how, when and why these operations were conducted - a large task indeed!