Friends of the SALINE VALLEY SALT TRAM
SaltTram.blogspot.com   SalineValleySaltTram@gmail.com
Salt Tram history is rapidly disappearing, and we are striving to rediscover the efforts of our forefathers in order to give proper recognition to their hopes, dreams and abundant sweat from an era that is rapidly fading from our memories. We are actively seeking out information about the mining of Salt in Saline Valley between 1903 and the 1940's, including: documents, photos, articles, stories, artifacts, etc. If you can help us out, please email us at the address above - Thank-you! --Tim and Brian Waag, the Waag brothers (aka E. Clampus Waagus).
Caution (PLEASE READ): Climbing around on the tramway is dangerous because its really old and defnitely unsafe, so don't even think about it. Shoot, just getting to it requires some perilous hiking, and if you don't believe me, just take a look at the Zig Zag Access Trail (or what's left of it). Plus, climbing on it weakens it and endangers your life. Also, the Saline Valley Salt Tram is on the National Register of Historic Places and should be treated with the respect that it deserves. What little remains is of great historic value, and should not be disturbed in any way. Heck, its probably against the law to move parts of the tram around, and certainly a crime to take home some of the few bits of it that remain (though you'd have to ask your friendly local BLM agent for details). So please treat it with the respect it deserves, so that future generations can enjoy whats left, without you messing it up. Really. Please. You can see its listing on the National Register of Historic Places at these web links:
http://www.nationalregisterofhistoricplaces.com/ca/Inyo/state.html
http://www.noehill.com/inyo/nat1974000514.asp
*****************************************************************************************
QUESTION 1: Walk all the towers between Station 1 and the Saline Lake. Determine the reason that the numerous A-towers fell over, and how much of the wood has been removed.

QUESTION 2:  Find the location of Station 1. Using the photos in this post, carefully examine and analyze what, if anything, remains of Station 1; although Brian recalls visiting the site of Station 1 and seeing only concrete, foundations, I do not recall. Note in the side-by-side photo below that I believe Station 1 can be seen in BOTH photos as a dark spec along the tram line between Station 2 and Station 1.

QUESTION 3: Brian recently claimed that we DID look at Station 1, and that all was gone except for the concrete foundations. However, in the modern photos of the tram route, as viewed from Control Station 1, there is still a large black dot where Station 1 "used to be", so I'm skeptical. On our May 2010 exploratory trip, we will be checking this out. See the photo below to see for yourself. Stay tuned. 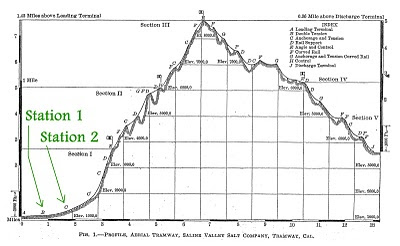 It all started when some photos of what we believe is Station 1 in Saline Valley surfaced, which were taken in 1963; unfortunately, these now appear to be photos of Station 2 and NOT Station 1; note that identification of Station 1 and 2 numbering right now is TENTATIVE, but we will sort this out before it is all said and done.

This station is believed to be unique among Salt Tram stations because it is the only double-tension structure in the entire Salt Tramway, at least according to the 1917 ASCE document (Doc02) - see excerpt from that document below - red underline. 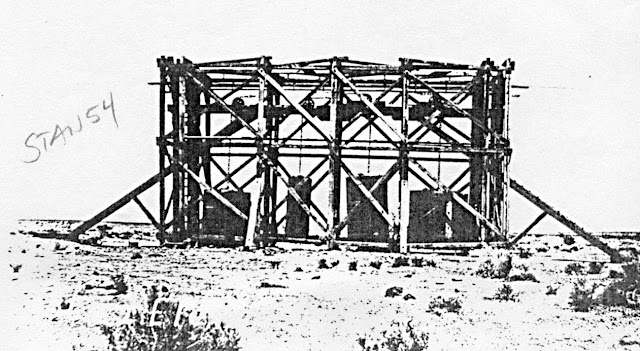 Its hard to tell. with the poor resolution, exactly which cables are being tensioned. However, given that this is an intermediate station (and not a Control Station where the each of the 5 tramway circuits terminates and starts), I am not aware of how the traction cable can be tensioned here. Therefore, the 4 "Box of Rox" (BOR) must be tensioning each of the track cables in both directions. What is not clear is why the BOR are of different shapes and sizes. However, I believe that ech of the 4 BOR are tensioning the track cables in both directions. It is approximately 2.5 miles from the Saline Lake Loading Terminal to Station 1, so it would make sense that both track cables are tensioned here over this large stretch of relatively flat ground (715 feet of elevation gain from the lake to Station 1).  For the uphill direction, it is a short distance to Control Station 1, a mere 8/10ths of a mile, but almost 2,000 feet of elevation gain. Normally, one end of the track cable is concrete into a huge cement block, but we will need to examine Control Station 1 to see if that is the case, or whether the track cable here is tensioned with BORs on both ends.

In any case, here are a few nice historical photos of Station 1: 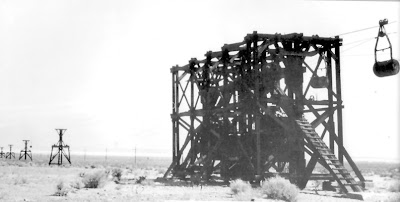 This historical photo shows Station 1 facing roughly towards the Saline Lake with 1 bucket heading out and one bucket just entering the station.

click to go to SALT TRAM HOME
Posted by Tim Waag at 3:50 PM